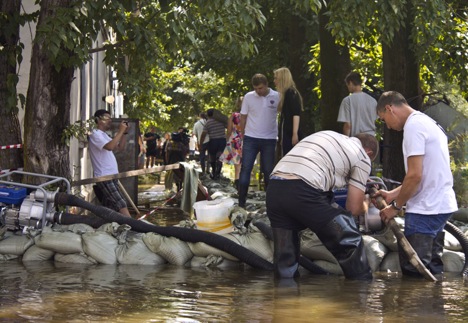 Volunteer work, where one man wants to help another, is the cornerstone of civil society. Source: Dmitry Khomenko

Despite the widely publicized influx of grass roots help to crisis-hit areas, Russian volunteers are still facing a real battle to mobilize and to change minds.

When a devastating flash flood killed 155 people in the southern Russian town of Krymsk in July 2012, it was a summons for journalist Dmitry Aleshkovsky, who joined hundreds of volunteers flocking to the area.

When Aleshkovsky created the "Nuzhna Pomosh" (Need Help) project in September 2012 to bring volunteers together, he was tapping into a trend that was taking Russia's creative class by storm: if you couldn't change your government outright by protesting, you could start making a difference by volunteering - whether it was signing up to monitor local and federal elections, joining search teams looking for missing children, or helping flood victims.

“Volunteer work is one of the few things where you can actually achieve something,” Aleshkovsky told The Moscow News. “Because in Russia, you can't get anything done through politics.”

Through efforts like those of Aleshkovsky, volunteers managed to raise 3 million roubles for victims of flooding in the Far East last month.

But despite the widely publicized influx of grass roots help to crisis-hit areas, Russian volunteers are still facing an uphill battle to mobilize and to change minds. While volunteer activists see an increasing number of people eager to get involved, statistics still suggest that Russians are less likely than their neighbours when it comes to helping people they don't know. And while that is beginning to change, experts say it will take a long time for volunteering to become a cultural norm.

“Their scale is still so small that volunteer organizations emerge and become visible only during times of emergencies or crises, fires, or floods, or protests,” Denis Volkov of the Levada Centre polling organization told The Moscow News.

Figures differ depending on how pollsters qualify volunteer work, but most of the numbers reflect a lack of institutional networks for volunteers.

According to the Center for Studies of Civil Society and the Nonprofit Sector (CSCSNS) at Russia's Higher School of Economics, only about 3 percent of the population is involved in volunteer work through non-commercial organizations, based on CSCSNS polls from 2011 among 41,500 respondents. According to Denis Volkov of the Levada Center, in fall of 2012, only 1 percent of respondents said they had been involved in volunteer work through NGOs.

The Russian division of the Charities Aid Foundation estimates that about 21 million people in Russia volunteer both formally and informally, based on findings from 2011 Gallop polls among at least 2,000 respondents. That was still less than 15 percent of the population. By comparison, the United States scored seventh on a CAF rating of volunteers by population share with 42 percent. Turkmenistan, Liberia and Uzbekistan topped the list, with 58 percent, 53 percent, and 46 percent of respondents respectively saying they had volunteered in the last month.

Volunteers from "Memory Vigil" rebury the remains of WWII soldiers

Volunteers from abroad holding the fort of Hermitage Museum

Volunteers help the victims of the flood in Krasnodar territory

Sociologists point to the Soviet Union, in which public efforts were largely centralized and controlled by the Communist Party, as the reason for the lack of initiative.

“The norm [in the Soviet Union] was that you had to take part, and it didn't matter whether it was volunteer work or obligatory,” Mersiyanova told The Moscow News. “When Perestroika happened, this obligatory factor disappeared and it hasn't been replaced by free choice.”

But according to others, despite notions of Russian society as collectivistic, active volunteering was never a major feature of public life.

“There is an absence of initiative, of connections between various volunteer groups, between people,” Volkov told The Moscow News. “This was from Tsarist times; though there was a flourishing of volunteer groups in the early 20th century, around the [First World] War. It ended with the beginning of the Soviet government.”

The law that forces NGOs with foreign financing to register as foreign agents, which was passed late last year, has led to searches at hundreds of NGOs and to increasing distrust. Meanwhile, in early 2013, a law was introduced into the State Duma that would regulate the work of volunteers.

Local red tape is also a problem. Yevgeny Grekov, who launched an unregistered group called Volunteers on Wheels, said that local volunteers in his home of Krasnodar are complaining that they cannot enter orphanages without permission from the Education Ministry.

“Volunteer work, where one man wants to help another, is the cornerstone [of civil society],” he said. “But we see how the government destroys this public trust.”

Although attitudes towards volunteer workers are generally positive, “the moment there's any [suspicion of] American funding, then that's it,” Volkov said, indicating that distrust towards such efforts increased when it was associated with foreign funding.

According to Mersiyanova, the changes in attitudes towards volunteering are visible, but without stimulus and encouragement from the top “it's going to take a lot of time for [volunteering] to become a cultural norm.”

For Aleshkovsky, however, some of the biggest challenges come from within.

“The hardest part is fighting with your own people,” he said. “There's always a bunch of people who tell you that you're doing everything wrong, helping the wrong people, and they really get in the way.”