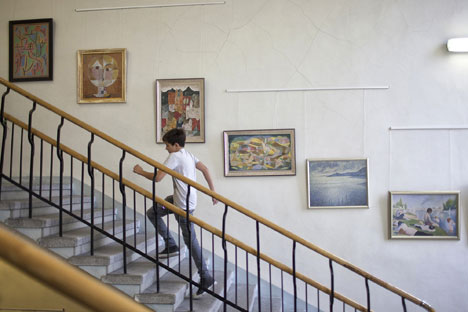 According to a rating drawn up in conjunction with the Ministry of Education, Lyceum №1535 is the best school in Russia, with the country’s best academic results for the 2012-2013 academic year. Only the smartest children graduate from this school.

On entering, the song “Ya na solnyshke lezhu... Ya na solnyshke lezhu” (“I'm lying in the sun”) is heard immediately, from the famous cartoon about the lion who was over the moon because of all his laziness. This is the bell that notifies students of their break: It reflects the overall mood of those whose classes have finally ended.

“I think that it's just the way it was meant to be,” says the school’s principal, Tatiana Vorobieva, when asked what the school’s secret it. “In 1990, the Institute of Asian and African Studies and the teaching staff of Boarding School №14 came up with the idea of creating such a lyceum with an advanced curriculum in the Chinese language. It was decided to open a lyceum that would give students a choice.

And so they did. At first, only two experimental classes were set up. In those two classes, children were able to spend more time studying the subjects they found especially interesting — the subjects of their personal choice.

In 1991, the boarding school was reorganized into a lyceum. Students from all over Moscow came to be enrolled, but only those who passed an entrance exam were admitted. Two experimental classes grew into a lyceum with 38 classes, 7 specialties and 1,080 students who can pick any specialty they want — just ordinary teachers and ordinary kids.

“It just somehow became a custom,” Vorobieva says, “that all people who work here are close to each other.”

Right along the school hallway there are soft, low couches. The students sprawl out on them anyway they want—sideways, with their feet up, whatever they prefer.

Two girls from the 9B class are sitting on it with their arms around each other.

“This is my third school, and it's like no other,” says Varya. “There's a special atmosphere here… Teachers communicate with you one-on-one. They listen to you, look at you as if you are a strong individual.”

“I don't know how to explain to you exactly who we are,” Asya says. “My brother's school is also one of the best. And they are so proud of it — they can't talk about anything else! As for us, we are also proud, but not in that way. We celebrate a little bit and then go on studying even harder.”

From no child left behind to every man for himself

“In our school, nobody shows off clothes or stuff like that,” says Varya on what seems like a touchy subject. “There are some kids here whose parents are really famous. Of course, they show off more than anybody else; it's very important for them to wear Gucci skirts. That's how they attract attention: Everybody looks at them, it's what they need…”

“But enough about them,” Varya continues. “You know, it's very hard to study here; it's tough because everybody is so progressive. When I attended my last school, my head hurt practically on a regular basis. In the afternoons I wanted to leave it as soon as possible; the hallways were always empty after classes. But, as for this school, I want to just stay, do my homework, hang around. I can't even explain why!”

Lyceum №1535 cooperates with universities, and the seven specialties that any student can chose were created for collaboration with different university departments. The history/philology and socio-economic specialties both teach students what they will need in order to study at the Institute of Asian and African studies at Moscow State University.

Subjects from the social and humanitarian specialties are chosen so that children are able to study law, social sciences, or politics. And so on. New specialties are not uncommon, since the school adapts to the outside world where its young scholars will study.

Varya and Asya study in class with a humanities specialty. They have their favorite teachers: the literature teacher, the history teacher...and, among the physics teachers, Andrei Hotuncev. 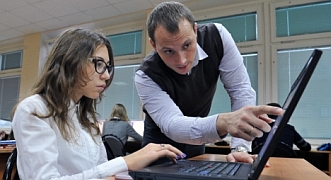 Hotuncev's class is empty, everyone has finished studying, but only two voices can be heard: Hotuncev is discussing the battle of Kulikovo with one of his students.

“It's practically impossible to make children leave during their break,” Hotuncev says. “They love discussing different subjects. But what can you do—school life is their life.”

Yet the physics teacher hints that a student's main life lies outside of the school. He has been working in this lyceum since its opening.

“This is how our lyceum turned out,” he says. “It's because of the people who gathered together and created a comfortable atmosphere, where interest is not suppressed and where people enjoy studying.”

“Any teacher needs to love his subject,” says Hotuncev, when asked what teachers need to interest their students. “Then you will understand it, and only after that you can explain it to children.”

There is another way in which they lyceum differs from other schools. During world art classes, students visit museums and do not just look at pictures on a projector. It sounds very simple, but there are not many schools in which this is done regularly.

Maybe this is due to the fact that, in different internal documents, in ministerial documents and other acts, there is no clause that states: “It is necessary to take students to museums during world art class.”

View the gallery: Modernist architecture in a simple Russian school

Teachers say that everything depends on how schools react to different rules. If they are scared to violate something and if everything stated in ministerial documents is forbidden, then that school is dead.

If the directorate understands that these rules are merely a recommendation for unrestricted work, then the school can actually breathe. Only in the space between rules can a life exist and evolve.

“It's like the chicken and the egg!” Varya exclaims. Asya agrees.

“I don't know how to explain it,” Asya says. “For example, in our school, everybody has their own locker in the locker room. You can't find this is in other Russian schools, [where there is] just one cloakroom for everybody, like in a theater. And, in our school, it's always like this. It's because everyone has their one place here — like they belong.”