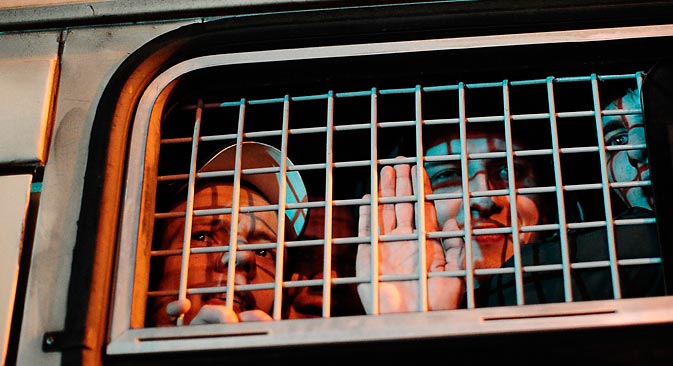 Over 380 people have been detained after rally in Moscow's Biryulevo. Source: ITAR-TASS

The murder of an ethnic Russian prompts violent protests in southern Moscow.

At least 380 rioters were arrested as a crowd of up to 3,000 rampaged through the Biryulyovo district of southern Moscow on Sun., Oct. 13. The crowd had gathered to protest a lack of progress in the investigation of the murder of a 25-year-old local, Yegor Shcherbakov, who was reportedly killed by a migrant worker from the Caucasus.

Shcherbakov was stabbed in a street fight by a stranger who approached him and his girlfriend as they were returning home from a local pool hall a few days earlier. A surveillance camera on a block nearby captured the face of the suspected murderer, but police have failed to identify him and track him down.

Locals believe that Shcherbakov’s murderer is a migrant worker from the Caucasus who works at a food market in the neighborhood. 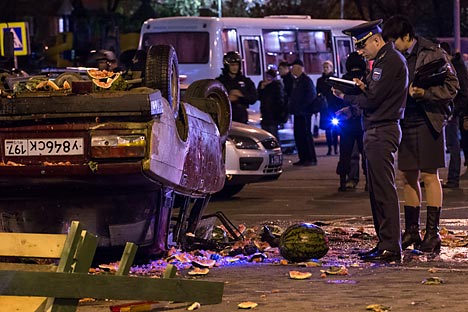 The protestors overturned at least one car and threw a flare into the shopping center. Source: RIA Novosti

Unsanctioned protests were organized in front of the district police headquarters on Saturday evening and Sunday afternoon demanding that police find the murderer and deal more effectively with crimes allegedly committed by migrants. The district police chief pledged to do everything possible to bring the murderer to justice but the promise alone proved not enough to mollify the crowd.

The police force of the entire city of Moscow was put on full alert on Sunday evening as several hundred people burst into the local Biryuza shopping mall, which is, staffed mainly by migrants. Members of nationalist groups joined the local crowd and broke windows, set fire to one of the shops and flipped over a pickup truck on an adjacent street.

“We’re sick of the lawlessness in this warehouse,” an unidentified rioter told Dozhd TV during a live broadcast on Sunday evening. “They come here to set their own rules,” he said of migrants.

Arrests continued into late in the evening as rioters turned over cars and kiosks allegedly owned by migrants.

Russian Interior Minister Vladimir Kolokoltsev told the RIA Novosti news agency that the instigators and participants of the riots in Biryulyovo should be called to justice. “Negotiations with the criminals are out of the question,” he said. 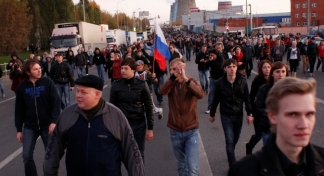 Riot police face off against protestors in Moscow

Police have cordoned off Manezh Square near the Kremlin on Sunday evening, where nationalists and football fans held one of the most violent rallies in the history of modern Russia in December 2010 after the murder of a Spartak Moscow FC fan Yegor Sviridov by a group of young men from the North Caucasus.

In July of this year a small town of Pugachyov on the Volga was hit by a wave of anti-immigrant rallies, during which locals blocked a federal highway. The protests were prompted by the murder of an ethnic Russian by a Chechen teenager.