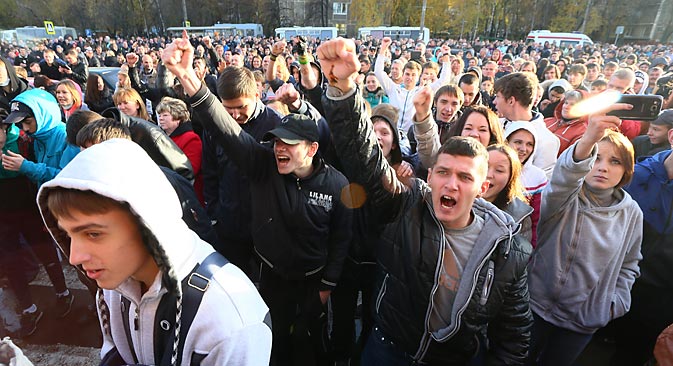 Migrants once again at the center of unrest and clashes with police.

The unrest in the south of Moscow could have been prevented, according to experts. Residents have repeatedly complained about migrant workers, and now the murder of a young man in this area has fanned the flames. Public anger has built up so much — due the behavior of officials, police and visitors — that any domestic conflict could lead to more mass protesting.

During a raid on a vegetable warehouse in the south of Moscow, police detained 1,200 migrants, as police officials reported on Oct. 14. The detainees were taken to the police station to check for criminal records.

Over the course of the raid, police discovered a suspicious vehicle, inside of which were several million rubles, three pistols, two knives and a baseball bat. Authorities are currently planning to close down the warehouse.

The raid was conducted after an altercation that caused massive unrest. On the night of Oct.10, in the south of Moscow, 25-year-old Yegor Scherbakov was killed. Reportedly, he had been standing up for his girlfriend, who was being harassed by a man who appeared to be from the Caucasus. During the altercation, the man stabbed Scherbakov with a knife.

As a result of prompt measures taken by the police, the area was stabilized. Now, however, everything will depend on the future actions of law enforcement agencies and officials. Indeed, the tension between the residents of the area and migrant workers has been building up for a long time, and the closure of one facility will not resolve this conflict.

President of the Alpha Association of Special Forces Veterans, Duma deputy Sergei Goncharov, says responsibility cannot be shifted onto law enforcement agencies, because officials and representatives of the migration service most likely knew what was happening in the district.

“Local people were constantly complaining about the fact that walking by this ill-fated vegetable warehouse was scary, that there were weapons and drugs located there. However, no preventive action was taken until the murder occurred and people came out into the streets,” says the deputy.

“Why are our police using this knee-jerk reaction method?” Goncharov feels certain that the police will check all vegetable warehouses in Moscow now, but, on the whole, things will remain as they were before.

Aslambek Paskachev, a member of the Public Chamber and chairman of the Presidium of the All-Russia Public Movement “Russian Congress of Peoples of the Caucasus,” agrees with the deputy. He argues that the lack of preventive work with migrants has led to these mass protests by citizens.

“Our organization has worked on similar events, and it turns out that this is usually a result of a domestic conflict, and then it is used by other groups to their advantage. It is clear that, if a crime was committed, it is necessary to catch the guilty person; and if law enforcement officials fail to do so, then, over time, a feeling of impunity develops. And then people try to vent their grievances at anyone that happens to be nearby,” says Paskachev.

The Pubic Chamber member says that, in order to avoid new conflicts, the percentage of foreigners an entrepreneur may hire needs to be determined, as well as a stipulation established that all newcomers working in the service sector must know the Russian language.

Goncharov does not fully agree with this approach. He notes that people are not concerned about international migration, but internal migration — in particular, migration from republics of the North Caucasus. These migrants are not subject to any quotas, and they often know the Russian language.

“We should not have such concepts as national laws and community regulations. In Russia, the rule of law must apply and all must carry out our laws. For their violation, people should be punished. Otherwise, there is a feeling that we have no political will,” says Goncharov.

Director of the independent nonprofit organization Moscow Bureau Promoting the Protection of Human Rights, Alexander Brod, explains that measures have already been developed to prevent the occurrence of such mass demonstrations by citizens, but they are not being used.

“The first was the experience of Kondopoga — a small town in the northwest of the country — and later in the south, in Astrakhan Region, Stavropol Territory and Saratov Region, and in Moscow. Neither authorities nor society has learned anything from all these events. Just like before, our migration policy is non-transparent: Officials, law enforcement officers and employers are all making money on the illegals,” says the human rights activist.

Brod believes that any event of a criminal nature could lead to further protests. “We need to reduce aggression between the local citizens and migrants, think about improving the situation in the country, work on searching for and identifying illegal migrants and reforming the law enforcement bodies. After such events, municipal officials and representatives of the police should be held accountable,” he says.

Society is so “fired up” that any event — even a peaceful Muslim rally — could be cause for provocation and the appearance of “avengers,” who, according to Brod, could try to restore order themselves.