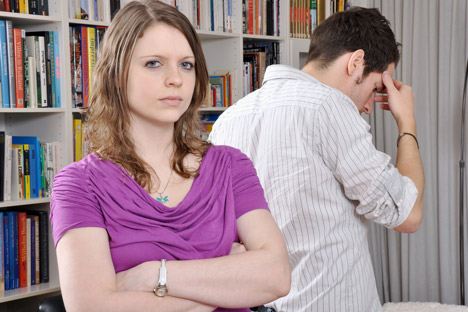 According to statistics, every third in marriage in Russia ends in divorce in the first three years. Source: PhotoXpress

Russia has the highest divorce rate in the world, but the causes and consequence of broken marriages aren’t surprising.

When Valery Lepekhin’s boss got on his nerves one too many times, he punched him in the eye. Lepekhin was fired, but he felt like a hero – that day. The real consequences of his action appeared only later. Valery started looking for work, but when he applied for jobs, the potential employers wanted references. And when they called his previous place of work, Lepekhin’s former boss said that he was a lousy employee.

Lepekhin’s wife, Irina, begged him to apologize to his old boss and ask for his job back. “Before our second daughter even turned six months old, our family needed money,” Irina said. But Valery refused. Irina was on maternity leave, so the family decided to rent out their apartment and move in with Irina’s mother, Nina.

Nina had never liked Valery. She always thought her daughter made a big mistake in marrying him, and the family’s current situation seemed to prove her right. Caught between her husband and her mother, Irina gave Valery an ultimatum: she would not speak to him until he made peace with his boss. The decision was catastrophic for the young family. Valery began to drink and he pushed Irina around. Eventually Nina intervened and threw Valery out of the apartment. Irina filed for divorce.

Statistics from Russia’s social registry office show that the majority of marriages end in divorce. Ten years ago, every third Russian marriage ended in divorce; today it is every second. In 2012, about 650,000 couples divorced while 1,213,000 got married. Russia had the highest divorce rate in the world in 2012 according to the United Nations.

Sociologists say that the main causes of broken marriages are alcoholism, financial difficulties and crowded living conditions – and in many cases, all three.

“In a typical Russian apartment, there are more people than rooms. Many middle-aged couples still live with their parents because they have nowhere else to live,” said Alexander Sinelnikov, Associate Professor of Family Sociology at Moscow State University.

People themselves, however, say differently. According to a survey by the All-Russian Public Opinion Research Center (VTsIOM) conducted in 130 towns across Russia, only 3 percent of people said that cramped housing conditions were the determining factor in their divorce. Cheating came first, with 24 percent of respondents attributing the downfall of their marriages to infidelity, followed by poverty (21 percent) and the inability to compromise (19 percent).

According to statistics, every third in marriage in Russia ends in divorce in the first three years. People 35 and under account for the highest percentage of divorces. But there is another, significant number of people who get divorced after having lived together for 25 or 30 years. Once their children are grown, they see no point in continuing to be a couple.

“When children grow up, parents lose their common field of action,” said Kirill Khromov, Head of the Crossroads Psychological Center. “It looks like the end of a joint project—the objectives have been achieved, and they fail to find new ones. There are couples who can weather all kinds of storms because they still enjoy each other’s company. But most often, children are the only thing that keep couples together.”

According to sociologists, the biggest worries for divorcing women in Russia as in many other countries are financial stability and childcare. Nevertheless, many divorced women enjoy their new role as breadwinner. Russian women do not tend to rush into marriage again.

Men in a divorce are more concerned about the loss of territory – both literally and figuratively. In the psychological sense, they are no longer able to set their own rules in the place where their children live. And in the physical sense, they are forced to move out to another living space. As a result, many Russian men limit their sphere of responsibility – by moving back in with their parents. It’s also not uncommon for Russian men to remarry quickly.

“Many divorced men neglect their responsibilities such as the education of their children or their financial responsibilities,” said Kristofer Svoder, an associate professor at the Higher School of Economics National Research University.

In any divorce, children are the victims. After the divorce, they usually live with their mothers and over time, their relationship with their fathers deteriorates. According to an opinion poll by the All-Russia Public Opinion Research Center (VTsiOM), within five years of a divorce, 44.1 percent of fathers see their children often. Between 5-9 years after a divorce, the figure drops to 31.9 percent, and after 10 years, it drops again – to 24.5 percent. The percentage of divorced fathers who say they never see their children rises from 12.2 percent in the first five years to 17.2 percent after 10 years.

“In family law, fathers have equal rights to raise their children even if the court orders that the child must live with his or her mother,” said Artem Zaimantsev, a lawyer specializing in family law. But according to statistics, 17 percent of fathers don’t take advantage of this opportunity at all, admitting to never seeing their children after a divorce. On the other extreme is the handful of fathers who kidnap their children from their ex-wives, which is not a crime under Russian law.

“In 70 percent of cases, ex-spouses become bitter enemies,” said Kirill Khromov. “Almost always, divorce is seen as a psychological trauma on par with the death of a loved one.”

But despite the serious consequences of divorce, psychologists maintain that for those who take that route, a divorce is not a tragedy, but an opportunity for growth. And it seems that more and more Russian couples are basing their actions on this way of thinking, preferring to live together not “happily ever after,” but rather just for a short time.