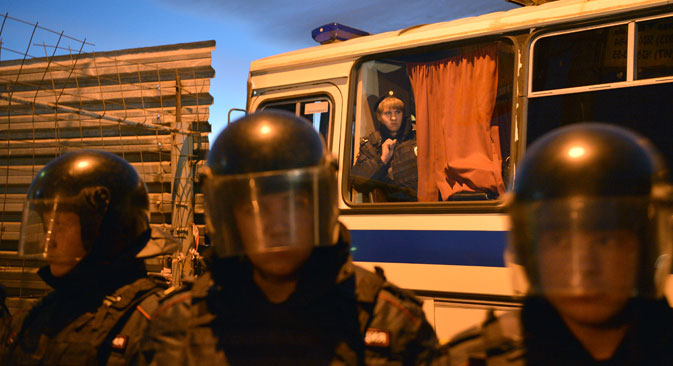 At least 380 rioters were arrested as a crowd of up to 3,000 rampaged through the Biryulyovo district on Oct. 13. Source: RIA Novosti

The conflict that started in the capital has spread to other major cities.

In the Russian regions, people have started taking to the streets in support of residents of the Moscow district of Biryulovo, who staged riots in response to the murder of a young man by immigrants. Saratov, Krasnodar, Omsk, Volgograd and Astrakhan have all spoken out, demanding a review of immigration policy.

Experts say the situation surrounding the flow of immigrants in the regions has long been a problem, and the conflict that flared up in Moscow has merely served to stoke the mood of dissatisfied Russians.

On Oct. 14, against the backdrop of the interethnic conflict in Moscow’s district of Biryulyovo, the center of another Russian city, Saratov, was witness to a fight between local youths and immigrants from the Caucasus region that involved some 20 people. On the same day, the city was the scene of a march staged by nationalists — a sign of solidarity with Sunday’s unrest in Moscow’s Birulevo district.

Vox Pop: Why the events in Biryulyovo happened

In the south of the country, residents of Krasnodar also decided to support Muscovites by staging an unauthorized demonstration on Oct. 14.

However, according to Interfax, the police prevented an attempt to stage an unauthorized nationalist protest in Krasnodar; only several dozen people answered the calls posted on social networks and youth forums to meet at 7 p.m. on the city’s Teatralnaya Square in support of the residents of Moscow’s Biryulyovo district.

At the appointed hour, Krasnodar’s central square was cordoned off by police officers, who maintained control over the situation.

In addition to Saratov and Krasnodar, mass events were planned in a number of other major Russian cities — Stavropol, Rostov-on-Don, Volgograd, Astrakhan and Tula — with young people using social networks to express their readiness to take to the streets in support of those protesting events in Birulevo.

Alexei Skopin, head of the Chair of Regional Economics and Economic Geography at Moscow’s Higher School of Economics, explained that the conflict in Moscow was the last straw in the situation of absolute corruption surrounding the issuing of work permits for immigrants.

“These tensions arose first in the regions and have only now reared its head in Moscow. The capital has seen such flare-ups before, as a result of individual conflicts, but they have never gone further than that. The greatest difficulty is that this is a problem that has been seriously neglected,” the expert said.

“Naturally, in such a situation, the Birulevo conflict will continue to unfold. Such are the sums of money circulating around illegal immigration that no taker of bribes is likely to turn them down of their own volition. Until order is brought to these affairs, the situation will only exacerbate,” said Skopin.

“With a bribe, a person purchases the right to remain and a certain indulgence, while the external costs fall to the general public—particularly, in the fact that people have to ensure security on the streets for themselves, when this is actually the duty of the authorities.”

The president of the Alpha association of special forces veterans, Sergei Goncharov, is convinced that the spreading of the conflict is connected primarily with the broad coverage of the Internet and the ability to distribute information at the click of a button.

“I go online and see calls to take to the streets. What one has to remember, though, is that Moscow, being the capital, sets the tone for the other cities, which means that people will react to what is occurring at the center,” said Goncharov.

The Alpha president further remarked that, at this stage, it will not be possible to make do with a campaign to check on immigrants; serious political decisions will have to be made.

Skopin believes that a solution could well be the introduction of a visa-based system with countries of Central Asia; he is certain that Russia will find 30 percent of current immigration flow from that region to be more than enough.