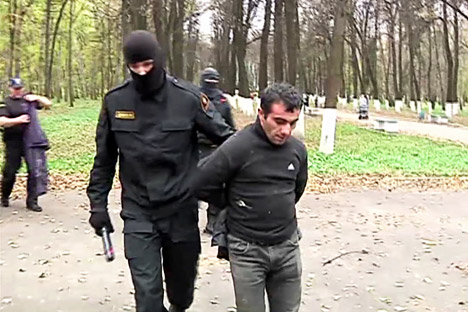 Zeinalov, the suspected killer of a Muscovite in southern Moscow, has been detained in the town of Kolomna near Moscow. Source: AP

Orkhan Zeinalov, a citizen of Azerbaijan, who was arrested on Oct.15 as a suspect in the murder of Egor Shcherbakov – an event which led to several major protest actions in Moscow – has confessed in unofficial conversations with investigative officers, representatives of the police have reported. However, unrest continues to reign in the Russian capital, with nationalist youths at the center.

Orkhan Zeinalov, who already has a criminal record for traffic offenses, was detained on Oct. 15 in the Moscow Region town of Kolomna and brought to Moscow by helicopter for questioning by the Investigative Committee. According to reports from the Investigative Committee, the department intended to file a petition on Wednesday, Oct. 16, with the courts for his arrest.

The Azerbaijani was identified by the owner of an apartment where Zeinalov was renting a room. The owner passed information about his person to the police, and law-enforcement agencies have promised to pay the him 1 million rubles ($31,300) for the tip he provided.

Several hours after the report of the capture of Zeinalov, nationalist youths attempted to hold a demonstration by the Prazhskaya metro station in the south of Moscow, at the site of a covered retail market.

Demonstrators called the event "Our response to Kurban Bayrami," during which 276 people were detained, the majority being teenagers. Participants of this demonstration had planned to follow the event with a march to West Birulevo.

“These are not residents of the Southern District; these are youths who have been led a merry dance. Literally before my very eyes a young man was detained holding a 50-cm long knife. He doesn’t know himself why he came here. He even looks underage,” said the Prefect of the Southern Administrative District of Moscow, Georgy Smolensky, at the site of the events.

Calls for people to take part in nationalist protests were published on the Internet on behalf of the organizers of the so-called Den Russkovo Gneva, or Day of Russian Anger, which was held in several Russian cities in April 2013.

During the early hours of Tuesday, Oct. 15, a group of youths attacked the Azerbaijani cafe Devichya Bashnya, located near the place where Shcherbakov was killed. The attackers broke down the door and smashed windows in the cafe.

All over Moscow, raids have been resurrected at wholesale and retail markets, which had been toned down for a time after the mayoral elections. The website of the Ministry of Internal Affairs for the capital city reports that the police are holding foreigners (“immigrants from CIS states”) from these locations, to establish their identity and to check to ensure they are legally entitled to be in Russia.

Tensions in Moscow flared up after the murder of 25-year-old Egor Shcherbakov on the night of Oct. 9-10. News of the murder brought Moscow to its feet. Against a backdrop of rising anti-immigration feelings in recent months, “popular gatherings” have transformed into rioting.

On Sunday, Oct. 13, twenty-three people were wounded in the unrest. A crowd smashed up a retail center, overturned a car, showered police officers with bottles and even attempted to storm a vegetable warehouse, where it was thought the suspect in Shcherbakov’s murder could have been hiding.

The official raid by the authorities on the vegetable warehouse led to the police detaining 1,200 immigrants for further investigation, but the suspected murderer was not among them.

Based on materials from RIA-Novosti, Interfax, Gazeta, Newsru.com and the official website of the Ministry of Internal Affairs.