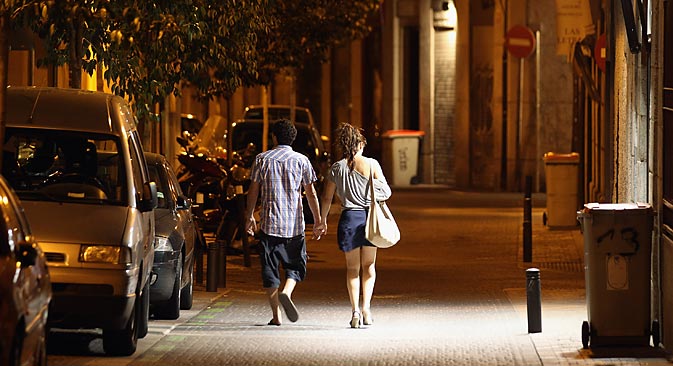 The brotherhood in Chelyabinsk receives about 10 calls every day. In most cases, young women simply ask to be walked home after dark. Source: Getty Images/Fotobank

The Brother for Sister movement that has recently sprung up in Russia consists of young men who walk young ladies safely home after dark, completely free of charge or obligation. They see them safe to their front door, and that's it—no courting and no romancing.

The young men themselves describe the movement’s purpose in very moderate tones: “Meeting young ladies, walking them home safe late at night, offering some help—that's what our group does. Our movement is not political or religious in any way. We set it up only to help tackle this particular problem our communities are facing now."

Ivanovo, the city of lonely brides

Two women for every man

Of course, dark alleys can be dangerous for young men or pensioners, as well. But young women are a particularly attractive target for drunken hooligans and rapists. Girls are well aware that they are much less likely to be accosted in the street if they have a male companion. Alone, or in the company of another woman, they are more vulnerable. Many are arming themselves with pepper spray if they have to walk home after dark. Now, however, they have another option: Brother for Sister.

The movement was set up more than a year ago in St. Petersburg, with the sole purpose of protecting young women from terrors lurking in the dark. Denis Shotikov was 29 at the time he founded the movement; he was living in a suburb and helping his friends restore a horse stable.

“Many of the people who are taking horse-riding lessons are young women,” Denis says. “We just didn’t feel comfortable sending them home after dark on their own. So we decided to walk them home. We had heard lots of horror stories about what girls have to face late at night sometimes. That’s why we decided to do something about it. We were almost like one big family at the stables, so the name of the movement, Brother for Sister, came up very naturally.”

Denis launched the Brother for Sister group on VKontakte, a popular Russian social network, and invited young men to join the ranks of the “brothers.” He also invited “sisters” not to be shy about it and to leave their requests for help. The candidates for membership of the brotherhood have to pass a rigorous selection process. In addition, Denis personally meets every new member and takes down their national identification information. "As the organizer of the group, I am responsible for all our members," he says. The St. Petersburg cell now has about a dozen volunteers between the ages of 16 and 40. Only one candidate has been turned down so far—a schoolboy of 14, whose mother refused to give her permission.

The example set by the group in social networks has proven very popular. Similar groups soon sprang up in 25 cities all around Russia. In Chelyabinsk, there are now more than 100 brothers; all candidates are checked for a criminal record before being accepted as members. “Each volunteer has to pass at least three interviews,” says Daniil Kupriyanov, a 19-year-old student who coordinates the Chelyabinsk branch. "We also make a copy of the national ID of every member; these copies are kept at one of the police stations. Some of our members are actually police officers; they check all our new candidates for criminal record." Candidates are also required to be reasonably fit; they are not allowed to smoke, drink or swear.

The brotherhood in Chelyabinsk receives about 10 calls every day. In most cases, young women simply ask to be walked home after dark. But there have also been more serious cases. One caller pleaded: "My ex-boyfriend is threatening me, please help.” It turns out that this is a major problem; all around the county, young women are being persecuted by their angry former husbands or boyfriends, who harass them, beat them up, and even threaten to kill them. The volunteers in Chelyabinsk have had to deal with angry jilted lovers on several occasions; these bullies quickly calm down when they realize that their victims have someone to protect them.

Dealing with such cases, however, often requires a good level of physical fitness, so volunteers spend a lot of time at the gym. The Chelyabinsk group, for example, has been given free access to gym facilities; they also have a hand-to-hand fighting coach who trains them. After learning that the brothers often use their own cars to take young women home and patrol dangerous parts of town, the owners of a local chain of gas stations offered their help. The brotherhood’s patrol cars can now fill their gas tanks free of charge.

The knights of the dark alleys are often asked, “Why are you doing all this? Is that just to meet girls?" Denis says such questions make him laugh. "There are plenty of opportunities in our country to meet girls without going to all this trouble. And I am married, actually. My wife is the first person I spoke to when I first thought of setting up such an organization in our town.” Many of the volunteers are married, but members are discouraged from accepting invitations for tea even if they are single.

The brotherhood sometimes receives requests for help with a broken AC socket or a computer that is acting up—but the volunteers can’t make everyone happy. A notice on the group’s board reads: “Assistance with other problems is provided only if the volunteer is willing and able.”

Denis moved to St. Petersburg from a small village in Yakutia, in northeastern Russia. He says that he is still unpleasantly surprised at how indifferent people in the big cities can be toward each other. 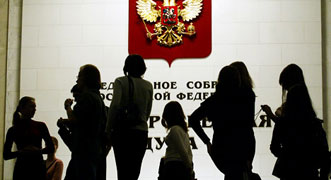 “They just don’t give a toss about other people’s problems. If something happens, it's no use calling for help. I was shocked to see steel doors at the entrance to high-rise apartment blocks: People think they will be safe if they hide behind those doors. But, unless there is unity and readiness to come to each other's help in our community, we are bound to stay afraid and alone, each behind our own door. It's time for us to stick together, and to protect the weak. I can’t do it all by myself,” says Denis.

He believes that most if not all men have a deep-seated urge to be warriors. Some, however, choose to exercise that urge playing video games. "They just sit there in front of a computer, playing at tanks, defending their virtual motherland from virtual enemies. Meanwhile, there are real enemies out there in the street, attacking our girlfriends, our children, our mothers. Why don't these virtual heroes do something about that?"