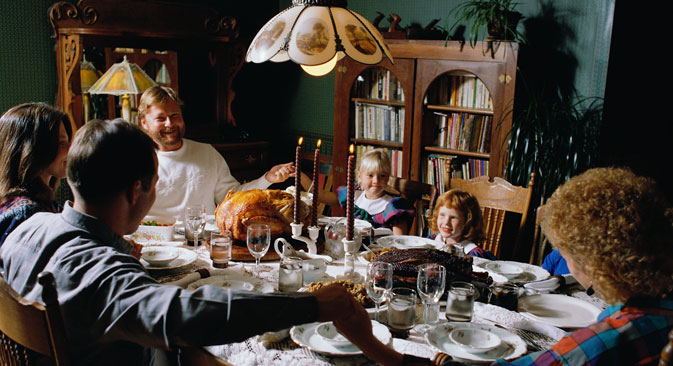 In their celebrations of America’s most traditional holiday, émigrés find a way to embrace an American identity while paying tribute to their roots.

For many Russians who have emigrated to the United States, Thanksgiving is their favorite American holiday – a window to a culture that is now theirs.

Lara Vapnyar, an acclaimed writer and frequent contributor to The New Yorker, has a deep appreciation of traditional American food. Her experiences of cooking and eating found their way into her 2008 short story collection, “Broccoli and Other Tales of Food and Love.”

“I love cooking simple American food, corn, green beans, cranberry sauce, because for me it's exotic and not simple at all,” Vapnyar told RBTH, but her early Thanksgivings in the country were anything but simple.

“When we first came to the U.S., I read what you're supposed to eat on Thanksgiving. One of the most important items was yams. I bought a can of yams. But when we opened the can, we saw that these were carrots,” Vapnyar, who came to the U.S. from Russia in the early 1990s, recalled.

“We heard so many stories about how recent immigrants are constantly duped. We wanted to go back to the store and speak to the manager. But first we decided to to ask our neighbors what to do. They looked at the can, tasted a few pieces and said: ‘Are you crazy? These are yams.’”

Margarita Litvak, a 20-something resident in obstetrics and gynecology in the Washington, D.C. area, also has fond and appreciative memories of her eclectic émigré Thanksgivings. Her father and mother settled in Washington in the late 1980s, when she was four.

“I had always wanted to be “American” in school as a kid,” she recalled. “I was fascinated by my friends’ PB&J’s, and ham and cheese sandwiches in elementary school, just as they were intrigued by my grandmother's rice pilaf or katletki - a food that I can only describe as meatloaf and meatballs' delicious love child.”

“I always insisted my family be ‘traditional,’” she recalled. “I would cajole my mother to make stuffing and a pumpkin pie. She made a mean turkey, but she could never quite understand the purpose or necessity of the stuffing. So every year, I would buy a pre-made ‘add-water and fluff with a fork’ stuffing in a bag and a ‘follow instructions on the can’ pumpkin pie. Both are delicious. Our turkey is routinely preceded by a vast array of Russian sides: smoked salmon...herring, olivye, beets in one form or another. Finally, our food was accompanied by a ton of wine and usually something stronger. Everyone would leave our table stuffed, a tad drunk, and sleepily happy.”

Litvak is a bit melancholy this year, as she will be delivering babies during the night shift on Thanksgiving weekend.

For Mark Kelner’s family, Thanksgiving was always “a big thing.” Coming from a Russian immigrant background, “we’ve a lot to be grateful for,” he said.  Kelner, who is a writer and curator living in Washington, D.C., married Margarita Litvak in 2013.

For the Kelners, the holiday “was an excuse to cook American food, which was not usually on the dinner menu for other special family holidays and even during the year, especially in the early days.  (I still remember red caviar on bread that my dad packed in a brown bag lunch that I’d take to school). “

A common thread for Russian-Americans who shared their Thanksgiving memories is a general bewilderment over Black Friday, the biggest sales day of the year in the U.S. “Black Friday is the day when you DON'T go to a store,” said Vapnyar. “It's really unpleasant there. We usually go to the movies. It's crowded too, but at least nobody gets killed.”

Olga Tymshan, 33, a student in filmmaking at the New York Film Academy, said she has so far only celebrated Thanksgiving once, in 2012,  “because I got an invitation from my American friend who organized a big family dinner.” And she finds Black Friday particularly puzzling.

Tymshan said she tries to stay at home and avoid “mass madness over artificial sales in the U.S. that you can find at any other time of the year. What's sad for me is that some of my friends are really ready to get up at 5 a.m., drive to God knows where, to be stuck in traffic, get exhausted during the day, and come back with an ordinary number of shopping bags. But maybe it is part of the American fun for them?”

Actor Irina Koval, who is well known in the D.C. area for her roles in Synetic theater productions, said that she never liked Black Friday either. But, she said, this is mainly because her husband works in broadcast television and often had to get up at 3 a.m. to cover the sales and general mayhem of the event for Russian TV.

“When celebrating with my grandparents, they put out glassware adorned with red, white, and blue. Important above all, however, are the toasts – and there are many. The most unusual one is often given by my mom somewhere in the middle of meal. After sharing the pleasantries of health, togetherness, life, liberty, and the pursuit of happiness, she has a traditional toast given in honor of…  Leonid Ilyich Brezhnev! “

As General Secretary of the Central Committee of the Communist Party of the Soviet Union, it was he, “acting as an unlikely Moses,” who gave permission for thousands of Soviet Jews, the right to leave and start new lives in America.

“And in 1973, the timing couldn’t have been better.  My mother left the U.S.S.R. pregnant and I was born here in the U.S.A. Me and Bruce Springsteen.  Thanksgiving is our favorite and most personal holiday.  It means everything.”