Charities see the promise in every child 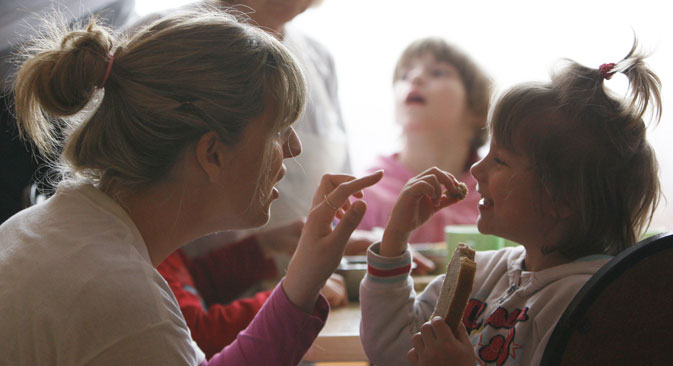 A pioneering Russo-British partnership is helping to transform the lives of children with special needs.

In a cramped but tidy flat in a nondescript Sixties block, six-year-old Saveliy smiles widely at a woman who is trying to teach him the simplest of movements. The boy suffers from cerebral palsy and cannot stand or sit up. He cannot speak and looks half his real age. The woman in her 20s working painstakingly with him is neither his mother nor his sister, but a Portage [a home-visiting educational service for special-needs children] volunteer.

Simple steps to a brighter future

Portage is a developmental system for children with special needs and their parents that first emerged in the US town of Portage, Wisconsin, in 1970.

It has won widespread international recognition for its success in helping children reach early development milestones in terms of language, movement and understanding by breaking down learning activities into small steps, often through play.

It uses a series of precision teaching techniques involving home visitors working with parents that are based on the capabilities of the individual child and the things he or she most enjoys. For example, a child may learn to pick up a toy, move it from hand to hand, then drop it into a toybox in a series of steps encouraged by a carer, or to give eye contact to a parent during a nursery rhyme.

The success of portage has led to a growing understanding of how much disabled children can learn under the right conditions.

Here in Ryazan, an industrial town of 500,000 100 miles south-east of Moscow, Saveliy’s family is part of a community project run by a Russian NGO, Obeschanie (The Promise) with help and financial support from a British charity, also called ThePromise. The driving force behind Obeschanie is Armenui Gevurian. As a professional linguist and translator, she never thought she would end up running a charity for disabled – no, special, she corrects me – children. “It’s all thanks to Sarah,” she says. “It was her initiative, her passion, her support that made the whole thing possible.”

Sarah Settelen lost her daughter Ellie to cerebral palsy at the age of four in January 2000. As she grappled with her loss, Sarah trained in Portage, a system that helps special-needs children develop language skills, movement and understanding by breaking down learning into small steps. She then went to Russia as a volunteer in a state-run baby home.

In Russia, children with conditions such as cerebral palsy or Down’s syndrome were often shunned and even abandoned by their parents because of a social stigma attached to disability. It was not unusual for staff at a maternity home to advise a distraught mother to give up her baby to a care home where children would languish for their entire lives.

Irina, Saveliy’s mother, says that doctors tried to comfort her by suggesting her next child would be healthy, so it was acceptable to let Saveliy go to a care home. She says: “I was hoping this could be cured. Had I known what I would go through over these six years I would have probably taken the doctors’ advice.”

She left work to devote herself to caring for Saveliy day and night, while her husband worked to provide for the family financially. Both say that they lacked the opportunity to mingle with other families. This was the environment into which Sarah Settelen and Iona Sutherland arrived in the summer of 2002 as volunteer workers in an orphanage in Ryazan. The youngsters they cared for in their two-month stay left an indelible mark on them, and Sarah and Iona were determined to do whatever they could to improve the children’s chances of a better life.

Sarah was determined that her daughter’s cherished life would not have been in vain, and that other hidden, silenced children in the world would be heard, celebrated and supported. ThePromise charity was born.

Sarah and Iona secured agreement from a Ryazan orphanage to establish Portage there. It took a while to raise the money and train local staff, but the pilot scheme in 2005 was so successful that another orphanage and the local authority asked the charity to expand the service to older children.

“When I first visited Ryazan, I felt like a stranger and had no clue if our ideas would work,” says Sarah. “But the people have welcomed us so warmly and have embraced the new ideas we brought with such enthusiasm and determination that Ryazan feels almost like my second home.

While the orphanages benefited, a more subtle change also took place. ThePromise believed that families would be less likely to hand their children to the state if more support was available in the home. In 2006, working with the psychology department of Ryazan State University, it set up a community Portage service where student volunteers, supervised by a senior Portage worker, help families with disabled children. They visit once a week to work on developmental exercises with the child and his or her mother.

For Saveliy’s parents, the support is an enormous relief. Encouraged by positive changes in attitudes towards disability among neighbours and even complete strangers, they are now planning a get-together with other families, something they could never have dreamt of in those six lonely years.

But old habits die hard. Irina Barkina, a single mother of twins with cerebral palsy, says that she had to fight really hard to secure places for her children at a local nursery. At first, I think she is talking about a specialist unit for children with disabilities. She replies: “No. Why would I want my lively boys to be consigned to a disabled facility? To me they are as normal as any other child, and I want them to grow as normal people.”

That was where the difficulty lay – to persuade local authorities as well as parents and children at a “normal” nursery to accept children with cerebral palsy as equals.

But Irina succeeded and is now supervising the construction of a neighbourhood playground for children with special needs. “Our children should be able to enjoy the outdoors just like ordinary children,” she says. “And other children and their parents should get used to seeing them and mingling with them and accepting them.”

Part of the community

Tatiana, whose daughter Nastya has Down’s syndrome, had to fight even to keep her baby after the doctor at the maternity home suggested that she give Nastya up immediately after the birth. “I cried all the time,” she said. “And then I met Portage volunteers from ThePromise. They were the first people to help me and to show me that Nastya can do things.

“I am a different person now and the people around me are different.”

Tatiana is trying to organise parents of children with Down’s syndrome to help each other and educate society. She monitors what happens at maternity homes and says that doctors no longer suggest that mothers give up their disabled babies. Instead, they provide contact details of parents like Tatiana or Irina.

ThePromise has just run its first training workshop in Moscow for 30 Portage workers. Obeschanie has also started running workshops and fund-raising in Russia. Ms Gevurian says: “There was a solid tradition of charitable work and volunteering in Russia before the Communist revolution. We are simply reviving those traditions with the help of our British friends.”