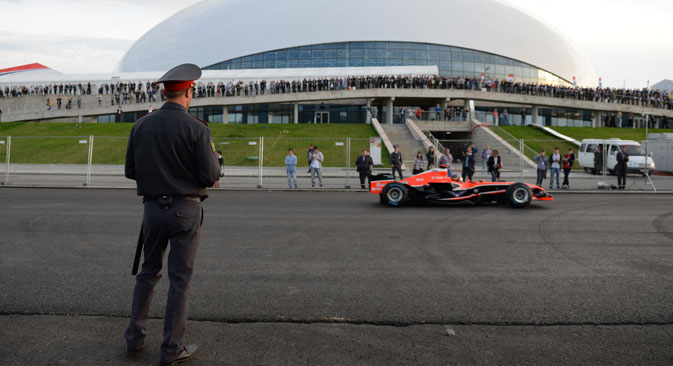 Security measures ranging from electronic surveillance to restricted access areas to a massive police presence are being prepare to protect the Sochi Olympics.

With an Islamist insurgency still making itself felt in Russia’s restive North Caucasus republics, many media reports have speculated about the possible effect of terrorism on the 2014 Winter Games.

Although Sochi is located in the Krasnodar Territory, which is not part of the North Caucausus, the distances between Sochi and such places as Chechnya and Dagestan are relatively short, in some cases, as little as 100 miles.

In order to calm the fears of foreign guests, the organizers of the Games have introduced some of the most extensive identity checks and sweeping security measures ever seen at an international sporting event.

In comparison, the total military presence at the 2012 London Summer Games, which had a level of security unprecedented at that time, was close to 18,000 people.

Controlled zones - Olympic venues and infrastructure, including the coastal Olympic Park and the mountain cluster of skiing facilities, as well as transport hubs, including air, sea and rail.

Forbidden zones - parts of the border area separating Russia from Abkhazia, as well as parts of Sochi National Park.

In an interview with NBC, president of the Sochi Organizing Committee Dmitry Chernyshenko promised that the Sochi Olympics will be “the safest Games ever.”

“Because we understood from the very beginning of our campaign that safety is a key priority,” Chernyshenko said. “Terrorism, it’s a global threat. Take Boston for example. This is an illustration that terrorism has no boundaries.”

Chernyshenko also mentioned that Russian and American officials have collaborated on security plans and that military security personnel will have special uniforms for the Games and will not wear standard military-issue camouflage that could alarm spectators.

Russia has also reached out to the UK and Georgia in organizing security for the Olympics.

According to Yuri Deshevikh, head of the Emergency Ministry Supervisory Activities Department, around 1,500 firefighters and emergency personnel will keep watch over the Games' participants and guests, supported by 100 units of equipment, including four helicopters and five ships.

Russian economist Mikhail Delyagin, however, forecasts that the number of foreign tourists to the Sochi Olympics held in the Black Sea resort area February 7-23 won't exceed 15,000-20,000 people – one-fifth of the original estimates and a third of the total number of foreign volunteers and members of sports delegations.

No matter how small - or big - the number of Olympics visitors, they will be heavily protected, not only by people, but also by sophisticated weapons.

Six Pantsir-S short-range air defense systems designed to take on various targets flying at low level, including cruise missiles and aircraft, have been deployed in the region to protect the Russian airspace along its southern borders.

Some experts have, however, voiced their concerns that security measures are in fact aimed at anti-goverment protesters, while others compared them to the Soviet actions ahead of the 1980 Summer Games in Moscow, when the KGB simply sent all those deemed suspicious out of the capital.

Russian authorities have implemented restrictions on protest and demonstrations in the area from Jan. 7 through March 21.

Rigorous identity checks begin at the ticket-buying stage. Anyone wanting to attend the Olympics has to not only buy a ticket from official ticket sellers, but also obtain a “spectator pass” for access to the events.

The application for the pass requires potential visitors to provide passport and contact details and a photo, and the passes must be picked up in person so that identity can be checked again. Spectators must wear these passes when attending events and show them whenever asked.

In order to protect the Games from potential terrorists already living in the region, police in Sochi have conducted house-to-house document checks to screen residents and reportedly deported thousands of migrant workers who were recruited to build Olympic facilities, drawing criticism from human rights groups.

A special forces brigade of veterans who served in Russia’s two wars in Chechnya will also be deployed to patrol the mountains around Sochi.

Police and other security agencies have run dozens of drills to prepare for possible emergencies. Alexander Bortnikov, head of the FSB, recently announced that a series of strategic exercises called "Olympics-2014" will be held at 270 locations related to the Sochi Olympics.

Vladimir Kuleshov, head of Russia’s National Antiterrorism Committee, had also promised earlier that during the Olympic period, unspecified actions will be taken to limit the movement of firearms and stun guns, handcuffs and pepper spray would be completely forbidden.

Security at the Games was thrown into the spotlight earlier this year when Doku Umarov, the leader of the best-known Islamic terrorist group in Russia, the Caucasus Emirate, called on Islamist fighters to target the Olympics in a video dated June 2013.

According to the London-based IHS Jane's Defense Weekly, the risk of a terrorist attack against the main Olympic venues remains low, with a greater threat being posed to secondary transport hubs and other sites located away from the main security zones.

Matthew Clements, an analyst at Jane’s, said in an interview with AP that the security zone around Sochi stretches approximately 100 kilometers along the Black Sea coast and up to 40 kilometers inland.

Alexei Lavrishchev, an FSB official dealing with Sochi security, explained that access to several territories – the controlled and forbidden zones - in and around Sochi will be limited ahead of the Games.

Access to the “controlled” zones would require tickets and ID, whereas the “forbidden” zones (including parts of Sochi National Park) would be accessible only to those with some work-related connection to the area.

All the cars outside the Sochi security zone will be banned from entering it for about three months, including one month before the Olympics and one month after they end.

Even vehicles involved in servicing the Games but registered elsewhere will require special passes.

The security measures also affect communications. According to Russian investigative journalists Andrei Soldatov and Irina Borogan, Internet, telephone and other communications providers involved in communications support during the Games have been obligated to build networks in such a way that the security services have full and uncontrolled access.

The Russian government also has invested into other means of surveillance, installing some 5,500 closed-circuit cameras throughout Sochi and buying a fleet of drones that can quickly spot anyone attempting to break the official ban on protests.

Soldatov called these measures “the most comprehensive surveillance in Olympic history,” adding that the U.S. Department of State has advised Americans “that it would be better to forget your laptop or smart phone in your home country, because it will be intercepted.”

The official statement from the U.S. State Department reads:

“Travelers should be aware that Russian Federal law permits the monitoring, retention and analysis of all data that traverses Russian communication networks, including internet browsing, e-mail messages, telephone calls, and fax transmissions.”