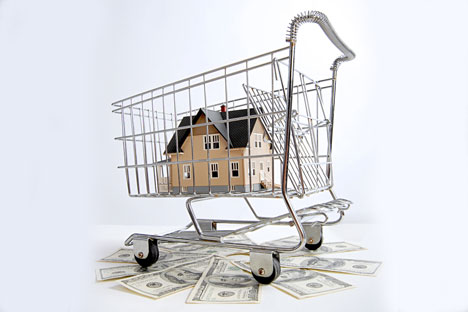 Tough at the top: buying a home, such as a high-rise Moscow flat, is a daunting prospect for many young people. Source: PhotoXpress

High prices and expensive mortgages are responsible for a growing number of adults living with their families even after marriage.

Russians appear in no hurry to fly the family nest and begin an independent life. According to statistics, one in three under 45 year-olds lives with his or her parents. High mortgage rates and the equally high cost of housing stand in the way of buying a home for many.

The price of jams

Young couples aged between 25 and 35 make up the largest group of mortgage borrowers, at 45% of the total, according to Metrium Group data. Both spouses need to work to pay the interest, with monthly incomes ranging from $1,500 to $2,400 per person.

Of these young professionals, 15% are middle-tier managers, who use their parents to guarantee their borrowing.

Single women under 40 with a child and who hold management positions make up another 15% of the market, while 20% is formed by parents who buy a flat for their children or to rent out.

According to estate agent Metrium Group, buyers looking to set up in their own apartment need a minimum of $112,600 (£70,000). For that sum, they can acquire 38.8 square metres in a new building on the outskirts of Moscow. Construction is most actively under way in the south and south-west of the city, according to Metrium chief, Maria Litinetskaya. Housing with finished interiors are more expensive: it costs $104,600 to buy 20 sq m on the outskirts of the Russian capital, say analysts from Incom Real Estate. Prices in the suburbs are almost half what they are in the city, at $2,000 per sq m compared to $4,100. But lower prices come complete with Moscow’s infamous traffic jams.

In the Russian regions, prices are substantially lower. A one-room apartment in a new building in Yekaterinburg can be purchased for $42,000, in Kazan for $50,000, and in Novosibirsk for $22,000, according to data from analytical agency Blackwood.

Both new buildings and existing housing can be bought with the help of a mortgage, and bank loans are gaining in popularity among Russians despite high interest rates, which average 14% per annum (the lowest on the market is 10.5% for those able to make a 50% down payment).

Six years ago, research conducted by the Russian Public Opinion Research Centre showed that more than half of Russians (56%) want to improve their housing situation, with big-city residents experiencing the most acute need. As a result, starting in the crisis-hit year of 2008, the number of mortgage loans has increased sharply. In the last year alone, the mortgage market of Moscow and the surrounding region has doubled, according to information from its main players. Expert estimates indicate that up to one million Russians take out a mortgage every year.

However, even at such rates of development in lending, Russia still lags behind Europe, particularly the UK, where, says Blackwood, mortgages are the most common way of solving the accommodation problem. According to Russia's Agency for Housing Mortgage Lending, only 24% of Russians considered a mortgage as a potential financial mechanism for acquiring housing in 2013.

As in the UK, the Russian government offers assistance to some of those who want to buy housing. Military personnel, teachers and young families can qualify for mortgages on special terms. However, those terms do not mean cheaper housing, but special interest rates. Housing has to be chosen on the open market, at publicly available prices, and income must satisfy banks’ lending terms.

Young families have been the most fortunate. The Russian government is willing to subsidise 30-40% of the cost of an apartment for young families that join one of the federal programmes “Young Family – Affordable Housing’’or “Home”. The age limits are identical – applicants must be 35 years or under (single parents can also qualify for government aid). The most important requirement is that the family be registered and officially listed as being in need of improved housing conditions.

The size of the subsidy and the living space that applicants can qualify for depends on the number of children. The standard is 18 sq m per family member. But there are additional details: for example, participants in the “Young Family” programme can only acquire finished housing, which is more expensive than apartments in new buildings, according to Leonard Blinov, marketing director at development company Urban Group.

According to Incom Real Estate’s data, the proportion of such clients is just 2.5% compared to 97.5% of borrowers on standard terms.

Russians who are unable to buy houses are forced to rent or live with their parents. High rents serve as an incentive to stay under the parental roof. A small flat in a residential area on the outskirts of Moscow can cost $600-$700 a month to rent. Prices depend on proximity to the metro and the condition of the flat.

For $1,000, a Russian can rent a fully furnished one-room apartment in good condition within a five-minute walk from the Metro. But that is also on the outskirts of the city; prices in the centre for housing with minimal renovation start at $1,300 and up. Compare that to the estimated average monthly salary in Moscow of $1,200.

“The low salary of a young specialist who recently graduated from university and the high rent payment make it impossible to live independently,” says Renat Laishev, president of the non-commercial partnership Educated and Healthy Children of Russia. “In 67% of cases, money is the reason behind the lack of desire to leave the parental home.”

But in addition to economic reasons for the housing problem, there is also a historical and cultural context. In the Soviet Union, the majority of Moscow apartments were not private, but communal households, where the entire family often lived in one room, while other families lived in other rooms, with shared kitchen and bathroom facilities. A separate apartment was an unaffordable luxury for many until the end of the Eighties and the beginning of the Nineties.

The first generation of  Russians not to experience this situation is only today coming of independent age, as students and recent graduates. They will have to solve the housing issue in the next few years, without regard to the social conditions of the Soviet past.