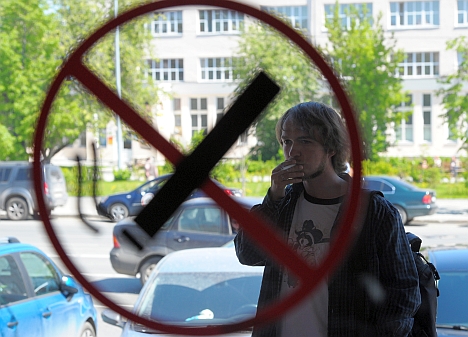 Thanks to the measures now being undertaken the number of smokers should be reduced by 5 percent every year – experts reckon. Source: RIA Novosti

The battle against smoking, at the state level, is starting to show results. This year, the tobacco market has declined by more than 5 percent. New increased excise taxes should enhance this effect.

Every Russian smoker knows the exact cost of his or her favourite brand of cigarettes. These are bought each day separately from all other goods, and thus the slightest fluctuations in prices are felt immediately. This was actually what the regulatory authorities were placing their stakes on, when they increased the excise rate. According to them, the average person’s desire to save money would outweigh the craving for smoking.

A World Health Organization study of annual per capita cigarette consumption rates put Russia in 4th place, with 2,786 cigarettes per person per year. However, thanks to the measures now being undertaken, including an increase in excise taxes, the number of smokers should be reduced by 5 percent every year – experts reckon.

Excise rates in Russia are growing annually. The strongest growth was recorded in the last two years. The rate has already doubled. In addition, it was apparently decided not to slow down this trend, and by 2015, this “sin tax” will double once more.

Another measure, which is already working is the law banning smoking in public places. It has been in force only since June 2013 – yet has already affected the producers. During the first 9 months of 2013, cigarette production declined by 5.4 percent, compared to the same period of the preceding year. Experts predict that the tobacco market will continue to decline in 2014, by 9–11 percent.

At the moment, the anti-smoking law is only applicable to schools, hospitals and government offices. For cafes and restaurants, it will enter into force only in 2014. However, many catering establishments have already started to follow this law.

Manager of Public Relations for the “Darling, I’ll Call You Back...” bars network, Alexey Savin, claims that restaurateurs sometimes take anti-smoking measures themselves, which are often more efficient than what the state does, in prohibiting smoking in their establishments. “Often, this is done especially for the guests, because the smell of tobacco blocks people’s taste buds,” he explains.

The impact of new taxes and excise taxes on the willingness to give up alcohol and tobacco, or at least to reduce their consumption, has been proven in practice. “Additional charges have always helped in combating smoking and excessive drinking. After all, cigarettes and alcohol are not a necessity of life, and unlike food, a person can go without them,” says business consultant of the Ministry of Agriculture and Food of Denmark, Esben Tranholm Nielsen.

Public health organizations are also optimistic for now. “Increasing the price of tobacco by 10 percent led to a fall in demand of 3 to 13 percent in Eastern Europe. For 11.5 percent of new smokers, the cost became a decisive argument against this bad habit,” Renat Layshev, president of the “Russian Children – Educated and Healthy” non-profit organization, describes the foreign experience. According to him, even if the reduction is small at first, over time, these measures have their effect. “When the authorities in Brazil began to combat smoking just through new laws, they achieved little. Only 2 percent of the smokers gave up tobacco. Today this has gone up to 8 percent,” says Layshev.

However, tobacco companies tend to evaluate this data in a different way. Anatoly Vereshchagin, communications director of Japan Tobacco International in Russia, states that the law has been implemented not so long ago, so it could not have had such an effect. As for the influence of excise taxes, customers do not always quit smoking, and often they just turn to counterfeits or the smuggled cigarettes market, Vereshchagin says.  He claims that this is the reason that the share of smuggled goods in the Russian market has grown up to 6 percent in the last year.

Alexander Lyutiy, Corporate Affairs Director for BAT Russia (a leading tobacco producer) believes that the raising of prices does not significantly affect the number of smokers, but it makes them think about a cheaper alternative. This leads to more underground production and smuggling from other countries. Even though statistics show a decrease in demand, Lyutiy believes cigarette consumption has not decreased as some smokers may have just switched to illegal products. “The main reason for a reduction in consumption of legal products is, in our opinion, the rise in prices. In the last seven years, this tax has increased six-fold. If in 2006, the average cost of a packet of cigarettes was 16 roubles ($0.5), now it is 43 roubles ($1.3). In 2014 it will increase to 52 roubles ($1.6), and this is only due to rising excise taxes,” he said.

According to BAT’s preliminary estimates, this year the legal market volume will be about 7–8 percent lower than in the previous year.