Earning a living in a small Russian village 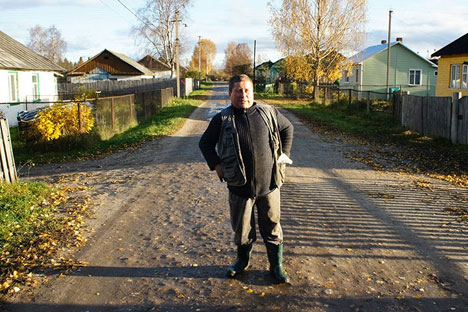 Yuri the Cucumber makes the most of the everyday struggles of a dying Russian village.

All photos by Dmitry Sokolov-Mitrich

It is said that one cannot earn a living in a small, Russian village. They point to examples of dying farms, pictures of destroyed houses and farm buildings.

However, it turns out that a person can earn pretty good money in the province. Yuri Smirnov, who’s nickname is Cucumber, earns 100,000 rubles a month in his dying Kostroma village

Smirnov is the kind of person who is always late but still manages everything. He is the guardian angel of the village Rossolovo in the Kostroma region. Smirnov’s phone number, just like those phones of doctors or firemen, is known by all his neighbors. Everyone in the village knows you can call Yuri at any time of the day, and he will help, whether or not the task will be inexpensive or maybe even for free.

“Formally, on the territory of the village council there are 86 villages, but a third of them have long been extinct, and such ones where people, not vacationers, live are only four,” said the head of the village council, Alexander Tranchukov. “ The population is 2,613 people, including 757 retirees. The young go to Moscow, St. Petersburg, Kostroma. In contrast, mostly elderly from the cities come to live out their lives in nature here. A little more and we can become a nursing home under the open sky.”

The Kostroma region lags behind other regions in virtually all indicators; in quality of life ratings it is in the lowest category. The population in the region has declined to 666,000, its economy is on par with Africa, and its leading industries are forestry and agriculture. In other words, there is a full and unconditional depression.

Tranchukov said that this is the reason why people are always waiting for a leader to organize them. "We are ashamed for some reason to do some good things. People do not come anymore for cleanup events, I have barely trained them to pay for garbage collection," he said.

For Russians, poverty is worse than death

That's why Smirnov the Cucumber is so indispensable in the village.

“I learned to be mechanic, worked in a farm, and in the ‘90s I began to slowly earn money,” Yuri Cucumber said. “Well, what else? Wages are delayed in farm for four months, and here I had an opportunity to get money immediately. In the 2000s, when it became better, I went to work as a guard, but did not stop to earn a bit on the side. One day I was a watchman, two days I earned money on my own.”

After some time, the company where he worked closed, so he bought two broken tractors and repaired them. Then Smirnov had to sell one of them, because he needed money. He confesses that he is now called back to being a guard, taxi driver, and even an assistant to the Liberal Democratic Party of Russia.

“But I do not want to work as a security guard,” Smirnov said. “I will not find such a salary. For example, we dug a grave today and got 1,000 rubles for it. Now we are going to load and deliver firewood, by which we will earn another 1,000 rubles. In the evenings I give a lift to a family up to a train station in the nearby town, and bring back the other family for 800 rubles. Then I earn some money on miscellaneous things. I never get less than 3,000 rubles a day, and I work seven days a week. Plus I get disability pension, which is almost 10,000 rubles.”

Formerly Smirnov use to perform a lot of physical work, but now he is an invalid as he has a congenital dislocation of the hip. However, this does not prevent Smirnov from earning 100,000 rubles a month.

“I'm a man, of which everyone is sure,” he said. “I have a good reputation in my longstanding and conscientious work. So for help everyone first appeals to me, and I gather people for a particular job. I have in mind a dozen smart guys. However, from time to time some of them start to become conceited, but it is treated quickly: I just wean him from the orders, and he quickly recovers. One thing is to quarrel with any one-time client, another thing is to have a conflict with a person on which almost the entire work depends.”

Now Smirnov has a clear and established pattern, but when he first started his business, he made a lot of mistakes. Strictly speaking, the story of his success also began with one big disadvantage: Yuri Smirnov just could not refuse anyone.

“People ask me to do something. Some grandmother wants her wood to be chopped, roof to be patched, how could I refuse? I helped. At first it was for free, then they started to offer money. That is my success story.

This is the abridged version of the article first published in Russian in Russkiy Reporter.