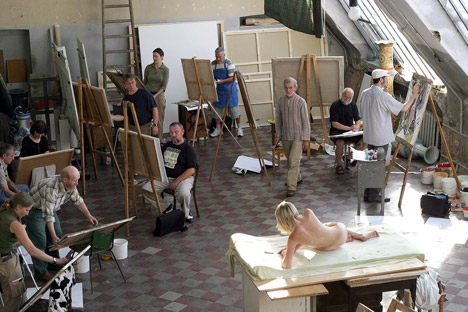 Artistic director at the Quick Drawing Club doesn’t see any particular difference between how foreigners and Russians treat their bodies. Source: PhotoXpress

Russians are traditionally viewed as being harsh and unconcerned about their bodies, but it turns out that this is far from reality.

Russians reacted vehemently when the artist Pyotr Pavlensky nailed his genitals to a cobblestone in Moscow’s Red Square in an act of protest last month. It turns out, people were less anxious about his political convictions than about the damage done to his body.

Since the Quick Drawing Club started, around 100 people have posed [nude] for us, and around 35 people work regularly. We’ve had models that represent a broad array of ages, physiques, professions and nationalities.  I don’t see any particular difference between how foreigners and Russians treat their bodies. Nearly all of them come to try their hand at something new, to participate in some way in the creative process—to see how they’ll look in observers’ drawings.

A lot more young women than men want to pose, because women more inherently like being the center of attention. This ingrained trait is more rare in young men; many of them are shy, but if the trait is intrinsic, it’s more excessive than in women. Interestingly, after the sitting, it is the young men who more closely look at the completed drawings—for women, the drawing is often a secondary factor.

Many kinds of people come to see me. There are quite a few hypochondriacs who start treating themselves at the slightest ailment, and there are people at the other end of the spectrum who have a completely irresponsible approach. There are also plenty of foreigners who neglect their health.

Russian women are much more painstaking about their appearance than Europeans or Americans. It’s a myth that Russians pay less attention to their bodies and clothes. And as a result of this, the number of health clubs, dance schools and beauty salons is growing here.

However, our lifestyle now is such that all the people who come to me are plagued by physical inactivity. We are all feeble and flabby and don’t know how to use our bodies because we have nowhere to go to use them. We don’t walk, but rather sit at the keyboard until something starts to hurt. People start to take care of themselves when you give them a nudge and show them that something isn’t right.

Russians fall into one of two extremes: either they completely ignore their body and don’t worry about it at all, or they turn their body into some sort of “Christmas tree” that they continually improve, adorn, touch up and “cover with flashy things.” This often occurs in defiance of common sense.

For example, Russian women adore high-heeled shoes. Concern about themselves and their body is replaced by the desire to look attractive. On the other hand, men in Russia often spread the idea that “it isn’t manly” to take care of oneself. They inwardly run away, throw on a clean T-shirt, and they’re done.

Neither extreme builds people’s self-confidence, and a lot of people are afraid to be photographed because they’re supposedly not photogenic.

People treat their bodies in a wide variety of ways, but there’s a curious consistency: the prettier the woman, the more complexes she has. Consequently, the most beautiful people turn out to be the most difficult at a shoot—they are inordinately perfectionistic. A body’s beauty depends greatly on a person’s inner state.

Photographing in the new style therefore has a therapeutic effect. The person often finds self-confidence and feels beautiful. There are people who change their lives after this, and there are people for whom the impact wears off after a week. Everyone has different reasons for coming to a photo shoot, but most often they have a need to feel beautiful and rid themselves of their complexes, and some come in order to snuff out their vanity.

Over the summer I gave a master class in Europe and can say that we hardly differ from foreigners.

In my work, I often have to undress young women and examine their bodies and the way in which they “sell” them. As recently as three years ago, many young women were interested in being photographed in the nude; this was perceived as a pastime. Now, the situation has changed, not only in Russia, but also in Europe. Being photographed nude is now bad and a disgrace. But it’s permissible if it’s on a cover and for a lot of money—in that case it’s an achievement. The body is more intensely becoming an object of trade and manipulation, and this goes for both sexes.

As for the difference between young women in Russia and Europe, Russian bodies are much more groomed—every young Russian woman carries around half a suitcase of full of every type of cosmetic to take care of her needs. European women do not have such habits. On more than one occasion, Spanish women have shown up for a lingerie shoot without being particularly well groomed, and they got insulted if they were asked to fix themselves up.