Concerns grow over quality of public schools in Russia 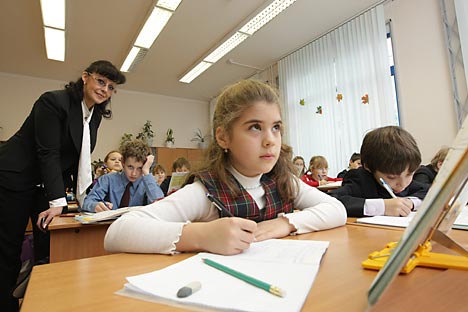 Many teachers we have spoken to tend to attribute the deterioration of the quality of school education to the above reasons as well as to the introduction in 2009 of the Single State Exam (SSE). Source: RG

With parents increasingly concerned by falling teaching standards, the quality of secondary education is an issue widely debated by the Russian public.

The most objective measurement of schoolchildren's academic performance is the Program for International Student Assessment (PISA). It tests 15-year-old schoolchildren every three years. The latest PISA test covered 74 countries.

Disappointingly, the test showed that Russian schoolchildren overall did not display outstanding academic achievement. The test assesses children's ability to understand written texts, apply mathematical knowledge in practice and operate science knowledge. Starting from 2003, Russia – in all the three areas (reading, math, science) – has remained firmly between the 30th and the 41st place, which cannot be described as satisfactory. Although in 2012 it demonstrated a considerable improvement, still it is far behind the leaders in the rating: China, South Korea, Singapore, Hong Kong and Japan.

The dangers of specialization

The public in Russia believe that in the USSR, the quality of secondary education was very high. That belief is not far from the truth, since the Soviet Union implemented a system, which, based on the ideas of the 18th century French Enlightenment, tried to provide a comprehensive academic education. That system was applied not only to schools but to the media too. Radio carried classical music, while TV showed opera and ballet. Classical literature was published in millions of copies. In the 1990s, the education system freed itself from the diktat of the state, secondary education standards slackened, and numerous alternative curricula with their own textbooks emerged.

Many teachers we have spoken to tend to attribute the deterioration of the quality of school education to the above reasons as well as to the introduction in 2009 of the Single State Exam (SSE). Yuri Latyshev, a trailblazing teacher from Ulyanovsk with 50 years of working experience and several books on pedagogy under his belt, says Russia is yet to realize the full negative impact of the introduction of the SSE. He points out that if previously schoolchildren studied history on the basis of a comprehensive program, now they focus only on those parts of it that feature in the Single State Exam.

"We shall soon feel a trough, as children leave school half-educated. All too often vital knowledge is left out of SSE questions, so children just ignore it," he said.

A Russian language teacher from Moscow, Dmitry Larionov, agreed, saying that today’s schoolchildren have “serious memory lapses, and they often don't know which century Russia's greatest authors, like Pushkin or Lermontov, lived in. They are not incentivized to get systemic knowledge, all they are interested in is getting trained for passing the SSE."

Lyudmila Yasyukova, a laboratory head at St. Petersburg University and head of the Ability Diagnostics and Development center, links a decline in the quality of education to a decline in conceptual thinking, i.e. the ability to identify significant characteristics, to establish cause-and-effect links and to categorize material. Conceptual thinking used to be developed in the course of teaching math and sciences.

"Previously, children began to learn botany and history in the fifth grade. What they have in the fifth grade now is nature studies in the form of stories about nature, which are not united by any logic and, instead of the history of civilizations, 'a history in pictures,' the same hodgepodge, without any logic," Yasyukova said.

Having said that, judging by the PISA surveys, the quality of school education in Russia is in line with the situation in the world in general. Although for a country that once used to pride itself on winning international school Olympiads, a position in the middle of the secondary education league table cannot serve as much of a consolation.