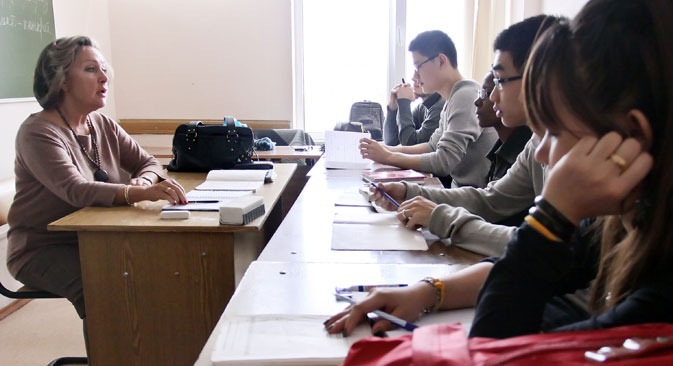 The Russian government has earmarked more than $1 billion for promoting Russian universities in the global educational rankings. Source: ITAR-TASS

An influx of foreign students will help boost the level of Russian universities.

Despite Russian universities’ low international rankings, many foreigners continue to enroll in the country’s institutes. This year, the government has allocated more than $1 billion to raise the prestige of getting a Russian education.

Just a couple of years ago, 145,900 foreign students were studying in Russia. Today, that figure is rising.

Why do foreigners wish to study in Russia? Many students say they come for the high-quality, inexpensive education. These are future engineers, doctors and teachers — that is, representatives of the “difficult” professions. Most of them subsequently return home, but many stay — around 35 percent, according to estimates.

The modest price of a Russian university education is the main reason why students say they choose Russia. However, there are other motivations.

“We have a unique school in our academy. Students come specifically for that,” saidTemirlan Dzhandarov, chair of the department of international cooperation at the Gnessin Academy of Music.

The music academy welcomes students from a range of countries, from South Korea to Spain. This trend is also reflected at the Gerasimov Institute of Cinematography (VGIK), a Moscow film school.

“Of course, students come for different reasons,” said Nikolai Skuibin, the dean of the directing department. “But the level of our school plays a major role.”

According to a different list, 18 Russian universities make the top 100. These showings are connected partly to how little the Russian education system is integrated into the world academic program.

But Victor Sadovnichy, the rector of Moscow State University, said he believes that international educational rankings are biased; yet Russia has not developed its own ratings.

“Russian universities can’t always be assessed according to the same criteria as European or American ones,”Sadovnichy said.

“Take China as an example. Having understood that their institutions of higher education rate low in international rankings for reasons including national specificity, the Chinese created their own ranking, the Shanghai Ranking.”

Sadovnichysaid Russia needs to create its own international ranking of universities with a headquarters in Russia.

Alexander Klimov, the deputy minister of education and science, said the money will go toward “developing international ties with institutes of higher education — attracting foreign instructors and supporting foreign students.

“The arrival of foreign students in Russia points to an increased level of Russian education and is one of the program’s goals,” he said.

Vladimir Filippov, the rector of the Peoples’ Friendship University of Russia — the country’s most international university — believes that universities must create living conditions that correspond to the foreign students’ notions of international standards.

“When they come to Russia, students are looking for similar conditions — necessary infrastructure, campuses, and food. The very idea of a campus, a place for communal living, academic cooperation, socializing and relaxing, is attractive to young people and is a powerful factor in drawing foreign students, who simply don’t imagine a university without a campus,” he said.

Yaroslav Kuzminov, the rector of the Higher School of Economics, sees a problem in the weak integration of the Russian teaching structure into world science.

In his opinion, international rankings sharply stimulate the process of scientific and educational globalization.

However, the heads of the leading Russian universities do agree on one point: A solution to the problem of raising the quality level of institutions of higher education exists. And this means that the number of foreign students coming to Russia will continue to rise.