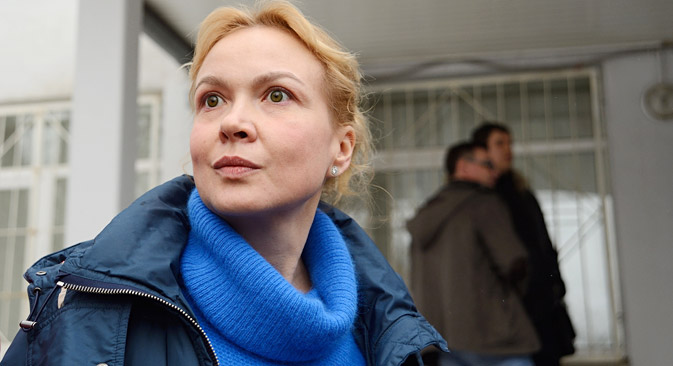 The court banned Aksana Panova from working in the media business for two years. Source: ITAR-TASS

Human rights activists and MPs slam court ruling banning a Yekaterinburg journalist from working in the media for two years.

A court in Yekaterinburg has found Aksana Panova, the former head of the Ura.ru news agency, guilty of extortion. She was given a two-year suspended sentence, fined 400,000 rubles ($12,000) and banned from engaging in journalism for two years.

This is not the first such ruling but experts wonder how it can be implemented given all the opportunities now offered by blogs and other social media.

Panova was found guilty of extorting a bribe from businessman Konstantin Kremko. From 2006 to 2007 Ura.ru published a series of reports alleging that Kremko, whose father happens to be a regional government official, was involved in seizing plots of land on the banks of Lake Baltym.

Five years later Kremko complained to the police that Panova had been extorting money from him in exchange for not publishing materials critical of him.

Panova said she would contest the verdict and would ignore the ban. "Until the ruling comes into force, I'll continue working. And after that I'll be working too. It is impossible to ban one from being a journalist. Russia has freedom of speech. Am I forbidden from saying what I think?" she said.

Experts have also expressed surprise about the verdict. It is not clear what a ban on journalistic activity involves and how it can be enforced in an era of social networks and blogs, which formally are not considered to be part of the media.

Borderline between journalism and freedom of speech

Lawyer Vadim Klyuvgant wonders how a ban on journalism can be incorporated into the current legislation. "The court should have demonstrated that the wrongdoing that Panova was accused of had presented more danger to society precisely when she was engaged in journalistic activity," he said, adding that the court must have very solid grounds for a ruling like this.

However, the ban on engaging in journalistic activity does not limit Panova's right to freedom of speech, said lawyer Ramil Akhmetgaliyev, a legal analyst with the interregional human rights association Agora.

"This ban applies to working as a journalist in the registered media. But she has the right to write and express her opinions on websites that are not registered as media, or in blogs," he explained. At the same time, Akhmetgaliyev described the ruling as "a trend that is dangerous from the human rights point of view.”

"This practice could be applied to any journalists who are seen as troublemakers. It is necessary to study the wording of the verdict more carefully to see how relevant journalism is to the charges against Panova," he said.

According to lawyer Vladimir Zherebenkov, the court ruling restricts Panova in another constitutional right — the right to work. "This is her main occupation, her livelihood. Since she was accused of a corruption crime, the court could have stripped her of her post but banning her from working in the media in general is an excessive punishment," he said.

Ban is one thing, enforcement is another

Mikhail Fedotov, the secretary of the Russian Union of Journalists and chairman of the presidential human rights council, on the contrary said the he does not see anything unusual in the ban on journalistic activity.

"It is obvious that by way of a punishment, a court can impose a ban on a person to engage in a particular type of activity,” he said.

“It is not an extraordinary measure. It can be applied to journalists who have broken the law while using their status of a journalist and I see nothing out of the ordinary in it… It is another thing that the verdict to Aksana Panova needs to be carefully studied. Members of our council looked at it at the preliminary investigation stage and we had numerous questions."

Andrey Tumanov, the first deputy head of the State Duma Committee on Information Policy, pointed out that journalistic activity is a very broad notion and many people are engaged in it without even realizing it.

"Keeping a blog or writing on Twitter is a sort of adulterated journalism,” he said. “The court can ban her from heading a state-owned media outlet, but Ura.ru is a private news agency. That's why I am a bit at a loss as to what exactly the court has banned her from."

Aleksey Simonov, the head of the Glasnost Defense Foundation and a member of the presidential human rights council, said a ban like this has become possible because the law is not clearly formulated and does not distinguish between the occupations of a street cleaner and a journalist.

"What is journalism? What is it specifically that Panova is banned from doing? Is she banned from approaching her writing desk?” he said.

“Even the authors of this law are unable to explain its meaning. Unfortunately, the current discussion is not touching on a very important topic, that of whether journalists can sell and buy information."

Based on materials from Slon.ru and RIA Novosti.