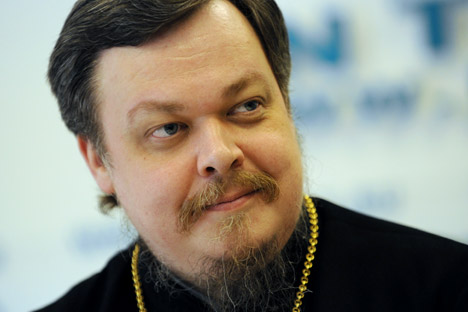 Vsevolod Chaplin is convinced that male homosexual relations must be completely ruled out by society, but also notes that it is better to achieve this through moral persuasion. Source: RIA Novosti / Vladimir Vyatkin

A month after India’s Supreme Court recriminalized homosexuality, a leading Russian Orthodox priest calls for a nationwide vote on whether Russia should follow suit.

Vsevolod Chaplin, the head of the Russian Orthodox Church’s department for relations with society maintains that gay relations between men pose a threat to the whole of society, but left it for the people to decide on the possible punishment for such actions.

Chaplin said in an official press comment that the question of criminalizing male homosexuality “deserved discussion in society without any doubt.” He added that since Russia is a democratic country, the majority of its people and not some “external forces” must decide what constitutes a criminal offence and what does not.

The roots of Russian homophobia

The cleric explained that public attitudes to homosexuality have varied at different times and in different societies, but the most widespread position was to treat such relations as a crime. Chaplin said he was convinced that male homosexual relations must be completely ruled out by society, but also noted that it was better to achieve this through moral persuasion. “If we have to draw the law into this, let us ask the people if they are ready for this,” Chaplin stated, suggesting the question of criminalizing gay male contact be posed in a nationwide referendum.

The comment came shortly after a scandal initiated by former Orthodox priest, actor, scriptwriter, showman and would-be politician, Ivan Okhlobystin. The man, who is currently working as a creative director for a mobile retailer, tweeted an open letter to President Vladimir Putin, in which he asked to reinstate punishment for male homosexuality in the criminal code, through initiating a referendum on the issue. He also doubted the effectiveness of the fresh legislative ban on gay propaganda to minors and claimed that the very existence of officially registered gay communities insulted believers’ feelings.

The open letter tweet was deleted after some time but the initiative gained support in the form of an official petition created on a governmental site. LGBT activists replied with their own internet letter, calling for Okhlobystin’s employer to sack the controversial figure and asking the CEO of the Apple corporation, Tim Cook, to review the contracts with the company the former priest works for.

Top managers at the company Okhlobystin works for first refrained from comments, but eventually told reporters that as he was expressing his own private opinion and was not calling for actual violence, they intended to take no action against him. They argue they don’t want to tarnish their image by suppressing his right to freedom of speech.

Comments from various Russian politicians and public figures followed, but they often concentrated not on the problem of gay rights but on Okhlobystin’s personality, noting that he is known for relentless attempts to draw attention to himself, and all his statements should be taken with a large pinch of salt.

MP Pavel Krasheninnikov, from the majority United Russia party, who heads the Lower House committee for civil, criminal, arbitrage and procedural legislation bluntly called Okhlobystin’s letter a PR stunt, and pointed out that Russian laws already provide necessary protection against sexual violence and against promotion of non-traditional values among minors.

The chairman of the Russian LGBT network, Igor Kochetkov, blasted Okhlobystin and the Orthodox Church in press comments saying that the referendum suggestion was both legally wrong and immoral. He also likened calls to restore criminal punishment for male homosexuality to Russian legislation to the idea of reinstalling concentration camps for Jews in Germany.

Dangerous alliance between church and state

Kochetkov noted that the inviolability of personal life was guaranteed by the Russian Constitution, and the suggested referendum could not be held as it directly contradicted that basic law.

Another Prominent Russian gay activist, Nikolay Alekseyev, also called the former priest’s letter an exercise in attention seeking, and added that there was no possibility of realizing Okhlobystin’s suggestion because Russia is a member of the Council of Europe and has signed international conventions on minorities’ rights. “If such a law is passed it would mean automatic expulsion from leading international organizations, and Russia would never allow this, considering the close relations between Russia and the West,” Alekseyev told RSN radio.

The Criminal Code of the Soviet Union contained an article ordering homosexual contacts between men to be punished with up to five years in prison (eight years with aggravating conditions such as rape). The article was abolished in 1993.