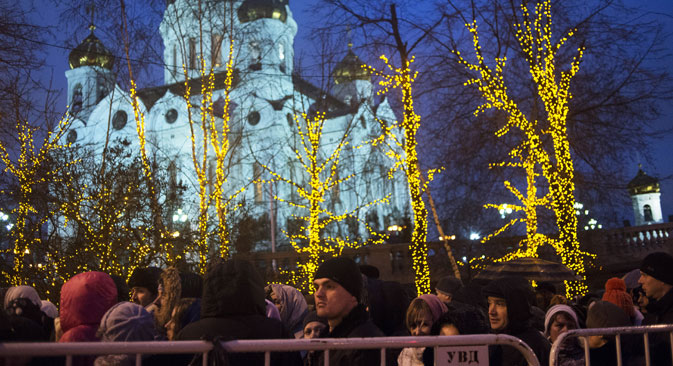 A story about an endless queue in Moscow in which thousands waited to see a major Christian relic brought from Greece.

Ahead of Orthodox Church Christmas on January 7, one of the main Christian relics, the Gifts of the Magi, were brought to Moscow from the Monastery of St. Paul on Mount Athos in Greece. To get to see the relic, which is displayed in Christ the Savior Cathedral, thousands of people spend up to nine hours waiting in a queue.

This outburst of religious feeling displayed by Muscovites and visitors to the city translated into a large-scale operation, involving the police, ambulance and rescue crews, and disrupting public transport and other traffic in part of the city. RBTH interviewed people in the waiting line to find out what they were feeling.

Gifts of the Magi relic from Mount Athos to visit Russia, Belarus and Ukraine

The holy relic of the Gifts of the Magi, preserved in the Monastery of St. Paul on Mount Athos, will be taken to Moscow, St. Petersburg, Minsk and Kiev for the Orthodox Christmas holiday in January 2014

The endless queue is separated from the road by metal crowd control barriers and is divided into segments, creating a chain of enclosures with people gradually getting into the one nearest to the cathedral. Everybody is smiling, including police officers.

“Why have you joined this horrendous queue?” I ask two women, who have spirituality written all over their faces.

“It is a matter of overcoming oneself,” one of them explains. “Overcoming oneself on the way to a holy relic. If you were to come and be let straight through, you probably would not feel the same grace. But when you work hard and suffer for it, it is another matter. The whole of the Orthodox faith is about this. The saints did heroic things.”

In other words, an Orthodox believer must first work a bit before they get anything.

Because of the line to the cathedral, there is a lot of police, including riot-police, ambulance cars, and Emergencies Ministry personnel here. It’s as if the danger is simultaneously coming from the people and threatening them.

There are traffic jams everywhere, the buses and the underground are overcrowded. The city is finding it difficult to adapt when all of a sudden it has to accommodate a path for a spiritual journey.

There is a persistent nasty drizzle. On the horizon, one can make out beautiful but hopelessly distant snow-white walls and golden domes of Christ the Savior Cathedral.

“Are you tired of waiting?”

There are people running along the other side of the barriers hoping to spot a place where they can squeeze inside the queue. A young policeman is being besieged by elderly women, who are asking him to let them through because every part of their bodies is aching. A bit further on, another babushka is waving her cloth bag in indignation and shouting at two policemen nearby.

"How can you treat people like this? Why is there no information? Why are we waiting for so long?"

Worried-looking middle-aged men are pulling up in a clapped-out car.

Two elderly ladies are engrossed in a conversation, while sipping hot tea from plastic cups provided by volunteers.

“I decided not to bring my grandson with me; it would be too much for him. Although, in general, he loves it. We read a prayer with him every night. He asks, ‘Granny, now no bad dream will come to me, right?’”

How to keep from offending ‘religious sensibilities’

Icon-painting secrets revealed at the workshop in Tsaritsyno

The line is moving, and the policemen open the barriers. People start running and elbowing each other. Everybody knows that they will be allowed to move just several dozen meters, till the next barrier. But still they are running and pressing against each other in the first rows. Some are smiling: It is easier to wait when you get a chance to do a bit of running now and then.

“Slowly,” a kind policeman is trying to reason with the crowd through a megaphone. “No running or pushing around.”

“Have you been waiting long?” I ask somebody in the line.

“You wouldn't believe it! From eight in the morning! We haven't moved a bit in four hours!”

“Then why don't you just go home?”

“No way. We have waited for so long already!”

Nearby is an underground station, a bus stop, and a pier ticket office. The queue is moving slowly along the Moscow River. To the left there are tanks with drinking water, field kitchens offering steaming hot food, and plastic toilet cabins. Across the road to the left of the line there are luxury apartment blocks and upmarket commercial properties.

“No wonder your recorder refuses to switch on,” an elderly pensioner, Lidia, wearing bright-pink lipstick, tells me. We are waiting for a bus to take us to the head of the queue, because it is a long walk. “All equipment is behaving strangely here, cameras don't work; film gets ruined.”

Lidia is 66, next to her is her friend, Lena, also wearing the same lipstick. Lena is 73.

“Have you heard anything about a Russian scientist who has created a miracle healing device?” Lidia says into my Dictaphone, which has at last switched on. “He has recorded information from myrrh streaming icons onto an electronic data storage device!”

Trinity Lavra of St. Sergius, where Russian history was written

Lidia and her lady friend are edging closer to me. They are very cheerful, their eyes sparkling.

“Do you think many people here are hoping for a miracle?” I ask.

“I think everybody is. People need to believe in something. Previously, they believed in Stalin, in Lenin. In every time and place people believe in something or other. Lenochka and me, we have faith in our hearts. We believe that we shall make this effort, will stand in this queue and will see the gifts that there given to our Lord. They were given to our God, can you imagine? We want so much to see them with our own eyes, to touch them. We shall see with our own eyes that indeed all those years ago, Christ was born and he was given gifts and we can see them ourselves! What better is there to do? Bake cakes and watch the television?”

At the very start of the line there is Alena, 18, in a stylish jacket the same bright-pink color as the two cheerful pensioners' lipstick.

“What are you waiting for here?”

“I want to touch the relic,” Alena beams a dreamy smile with her good-looking boyfriend standing next to her. “To feel this grace. I have been brought up in a religious family; we go to church, and take communion. Even when you just go to church, you feel a lightness afterwards. Same thing here. The year before last, when they brought the Belt of the Virgin Mary relic, I came here too to worship it, and truly I felt such lightness afterwards. There were small token belts that one could take home. I did and now whenever I am in trouble or have a headache or something, I take it out, kiss it, and all the troubles go away.”

“And are you prepared to wait for nine hours in the queue?”

More: Russians line up for the Romanovs

Those who have already seen the relic, are leaving the cathedral no longer in a line but as ordinary passers-by, at a distance from each other, wearing tired and tense expressions on their faces.

“How long did you spend in the line?” I ask two women with serious faces.

“What are you feeling? Was it worth the wait?”

The women suddenly remember to beam like somebody who has had a great joy.

“Of course it was! We have come to see this holy relic all the way from Voronezh.”

The women walk away and their faces once again assume the same tired and tense expression.