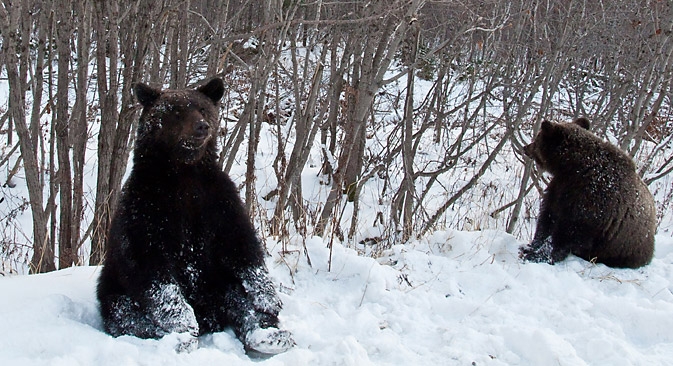 European Russia’s bears and hedgehogs have struggled to go into hibernation in the warm weather. Other wildlife is also behaving as if it’s still fall.

For almost two months now, Russia has been experiencing unseasonably warm weather. This quirk of nature has come as an unpleasant surprise to animals living in the wild: bears and hedgehogs have not been hibernating.

Rabbits turned white back in the autumn, meaning that for almost two months, they have been easy targets for hunters and predators. Honeysuckle is flowering for the third time this year.

Meanwhile, Russian biologists have been trying to make sense of this freak of nature.

“For hunters it’s tough at the moment, but for wild animals life is good,” said Yevgeniy Yeskov, a professor at the Russian State Agrarian University. “Until now, people carrying weapons would lie in wait as their prey looked for food, but now there’s no need for animals to go anywhere near humans, because there’s plenty of food in the forest.”

This winter hedgehogs have not been hibernating. Source: Alamy / Legion Media

The ungulates have currently got the best deal in the forest – they’re still nibbling on green grass. But rabbits have turned white and are now easy prey.

“Until the first snows arrived, hares were easy prey for hunters, but we don’t have any data confirming that lots of them have died,” Yeskov said. “Animals are, after all, like humans: the less energy they have to expend to keep themselves warm, the bolder and cheerier they are.”

Birds are also affected. “It’s not just the ducks that live in towns, but also the ones that live in the wild, that have chosen not to take flight. After all, for wildfowl, the signal for them to head for warmer climes is when rivers and lakes freeze over. But if there’s no ice, there’s no reason to fly away,” Yeskov said.

Bears will hibernate as soon as there’s snowfall. Hibernation is their number two priority, while food is number one. If there’s plenty of food, there’s no reason for bears to sleep.

“Some people I know say they’ve seen bears walking through the forest in December and in January. But as soon as the first real snow arrives, they’ll definitely settle down. It’s the same for hedgehogs. How long they hibernate depends on how much food they’ve had. If a hedgehog hasn’t had enough to eat and wakes up early, it will definitely freeze. This year, there are certainly no fears of that happening in European Russia,” Yeskov said.

As for the botanists, they’re not observing anything preternatural. They believe this is not the first time there have been such warm winters. On the other hand, it’s interesting for specialists like them, accustomed to all sorts of surprises, to see plants flowering for the third time in the space of a year.

“Mixed yellow-white flowers look rather elegant against a backdrop of fresh snow. Honeysuckle blossomed first in May, as usual, then it flowered for a second time in late October, and now it’s showing off its delights for the third time. That’s never happened before.”

Apparently, honeysuckle does not freeze and die if the frost comes while it’s blossoming.

“It might be that its berries will be smaller than usual. But overall, a lot will depend on the cold weather, which we’re expecting to arrive after 19 January. If the temperature plummets to minus 20 or 30, there might not be any fruit. We’re seeing lilacs with swollen buds, but they might also disappear. It’s a good thing that we’re not seeing this with stone fruits, such as cherries and plums. They’re very sensitive to cold weather,” Tsitsilin said.