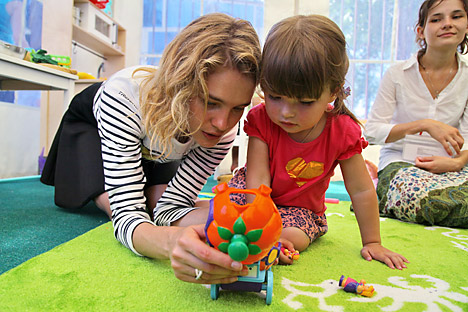 After starting a foundation to help children with special needs, Natalia Vodianova has learned how to get Russia’s rich to share their wealth for a good cause.

Natalia Vodianova's Naked Heart Foundation is marking its 10th year. Vodianova explains how Russia has changed and how to get rich Russians involved in charity.

Ogonyok: Your older sister Oksana has autism, was this the reason for starting Naked Heart?

Natalia Vodianova: Our foundation doesn't only focus on autism. It is concerned also with all aspects of children's development.

Oksana initially was diagnosed with cerebral palsy; she was diagnosed with autism only recently, so personal experience does play a role here, of course. But when I started the foundation, I was interested in children who grow up under difficult circumstances, because I myself was such a child. And Oksana was the happiest person in our family.

She is filled with joy; we surrounded her with love and attention. But it was very hard. It's a childhood trauma that is only now turning into something very positive. I grew up in a emotionally difficult situation — I was humiliated by my peers, failed in school, didn't believe in myself. So, it's not only about Oksana or about raising a child with disabilities.

We were living in appalling conditions, my mom was a single mother, I couldn't invite friends over like other kids did. I had a hard time with my schoolwork, although, in principle, I was fairly smart. I wasn't able to do homework at home. And if you can't do homework, you get bad grades. I didn't have many friends, and I started working when I was 11 years old. The interests of my peers seemed far from reality, I lived in isolation.

My happiest memories are associated with play — it was in those rare moments when the neighborhood boys invited me to play with them. I remember a sunny day, everyone was in a good mood, and we were playing together. But we played in basements, on construction sites, because the only slide that we had with a few benches around it was constantly occupied by teenagers who smoked and drank, and drove us away.

Perhaps that is why as an adult, I had the idea to create big, beautiful children's playgrounds. All children need parks, but for a child who is growing up in a difficult situation, it can also be a place of healing. Children can escape from reality, see a more cheerful life, and just start to breathe and live. It was a specific project, and the local authorities liked it. Today we have 107 playgrounds throughout Russia, in 79 cities.

N.V.: A person is like a seed. If it is planted in good soil, it will grow into a beautiful tree. And if it's planted in bad soil, it will turn into a weed. Yes, we have many disadvantages, time is against us, our past is against us. When your own needs are not taken into account, when you have to bring up your own kids, you think, "Why should I think about some other kids?"

But as soon as the situation improves, people begin to think differently. We also have a very complicated country geographically: In some parts of Russia, it is more difficult simply because it's cold and hard to make a living. But we are progressing, maybe slowly, but we are developing. There are people now who are ready for changes, simply because they are closer to the top than the bottom.

Supermodel Vodianova calls on people to help children with smiles

O:I know that you held an auction where "Learning with Lagerfeld" was up for sale, and a lady paid a large sum to buy it. How do you persuade people to participate in your auctions?

N.V.: I know all these people, but our relationship has developed over years, and it turns out that you need to spend years in order to win someone's confidence. It is a complex process. You talk to people in the fashion world, and then it turns out that a friend is willing to help the foundation, you find out suddenly, in a conversation. We don't just collect anything and sell it; our auctions have particular themes. And it requires a lot of effort. But I'm glad that people around me have positive attitudes.

It helps that the items sell well, that means that people want to continue to collaborate with us. It all has to be organized, people have to be brought in and inspired to bid without worrying that then someone will tell them, "You have a lot of money, give us some." Do you understand? In Russia, this can happen, that's why people are sometimes afraid to make big contributions publicly.

Literally a year ago we started to involve local businesses in our projects. This brings a company to an international level, it is international practice for a company to make money and get involved in charity work. In the West, where the market is competitive, businesses understand that you can attract people by participating in auctions like this. Society cares who they buy from: someone who helps children, or someone who doesn't help anyone.

O: You live in Paris now. What struck you when you first moved there?

N.V.: It's always been hard for me to think about how we are lagging behind. It's perfectly normal to see a child with autism or cerebral palsy on a playground in Paris or New York. There no one looks at such a child as if he's a threat. The kids all play together.

The interview is first published in Russian in Ogonyok.