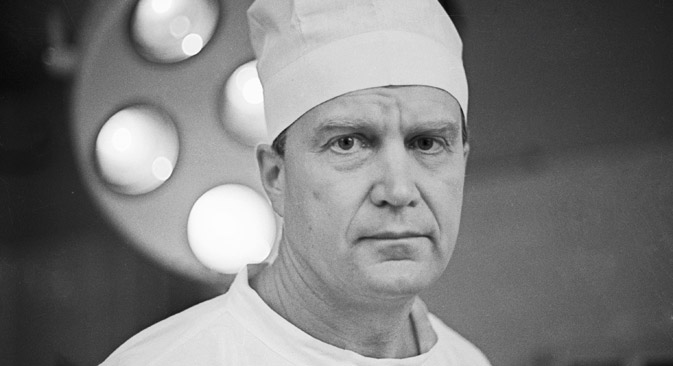 The first sex-change operation was performed in the 1970s in the Soviet Union, but the medical achievement was kept in secret for 20 years.

In the winter of 1968, a fetching brunette sauntered into the office of Viktor Kalnberz, a surgeon from Riga.

“I know you will try to dissuade me,” she told the doctor. “Please don’t. There is no point. I have no doubt whatsoever that nature made a mistake when it created me a woman. I am asking you to correct that mistake."

In November 1972 the patient left the clinic — with the body of a male, and a new ID. That was the first successfully completed sex change operation, not just in the Soviet Union, and in the world. But the decision to perform the first sex change operation involved not only medical specialists and psychiatrists, but Soviet leadership.

Four similar operations had been performed before, but they produced hermaphrodites rather than the opposite sex. Nevertheless, instead of recognition Kalnberz nearly lost his job and was a step away from prison.

Sex change operations were not the only sensitive medical area he pioneered. He also invented a penis prosthesis technology, which was completely unique at the time. His invention brought relief to many Soviet men who had trouble performing in bed, but treating impotence did not sit well with Soviet ideology.

Kalnberz said he knows very little about what happened to his female-turned-male patient after he left the clinic. He does not even know the patient’s new name; all he can say is that it was Inna when she first came to the clinic.

“He was very afraid that people would learn about the operation. That is why when they gave him his new ID and other documents, I asked him not to give me his surname or address. I don’t even know his phone number. The only thing I asked of him was to give me a ring every now and then, and tell me about his condition. The last time I heard from him was more than five years ago. He was just under 70 at the time," the doctor said.

Inna was just under 30 when she walked into Kalnberz’s office. He was the head of the Latvian Institute of Traumatology and Orthopedics at the time, and she was a talented and promising engineer, her loving parents' only child, and considered a pretty woman.

“I have been certain from early childhood that I am a boy,” Inna wrote in a letter to Kalnberz. “I have always had purely masculine interests and aspirations, which have gradually driven me away from other people and left me unable to have friends or start a family. When I was 12, I first fell in love — with a woman. That feeling made it painfully clear to me how hopeless my situation was … I have never had any hope that one happy day, someone would free me of the need always to wear a mask, to wear clothes I despise, and to feel ashamed of myself even when I am with my close relatives. I am now 30 years old. And even if, by some miracle, I were to feel an attraction to a man, it would be completely impossible for me to rearrange my entire life, learn to perform womanly duties, or acquire womanly habits, which I have a very vague idea of. I would rather hang myself than do all those things.”

A Russian export “better than sex” and more valuable than oil

The Soviet Union as seen by a Pin Up artist

Kalnberz said that at the time, he had already performed surgery on several people born hermaphrodites. “My program of treating men who became impotent due to injury was also becoming increasingly well-known. On the whole, operations of that kind were not exactly groundbreaking,” he said.

By the time Inna came to see Kalnberz, she had already made three suicide attempts; one of them was over her unrequited love for another woman.

The secret of a new male

A lot of time had passed before Dr. Kalnberz was finally able to perform a surgery on Inna.

“I had a lot of sympathy for her plight, but the decision was not only up to me," he explained. “A medical council was convened; there was an endocrinologist, a sexopathologist, a gynecologist, and a psychiatrist on the panel. They all agreed that conservative treatment methods were very unlikely to succeed in this case. The head of the Latvian republic’s health ministry had the last word. He gave us the permission, but did not actually sign any papers."

While the bureaucratic procedure was dragging on, Kalnberz was trying to glean as much information as he could about similar operations in other countries. It turned out that there had been only four such surgeries; the last one was done in Czechoslovakia. From the medical point, however, that operation was incomplete; the patient was left both male and female at the same time.

Dr. Kalnberz also said he was reluctant to perform the surgery, realizing that he would need to change something ordained by nature.

Two years passed before the surgeon received the final go-ahead for the operation from the authorities. On September 17, 1970, Inna was brought to the operating room. Her transformation from a woman to a man was done in several stages.

Today, thanks to the latest advances in microsurgery, such an operation would have been done in one go. Kalnberz said that at the time, it was very difficult to keep the experimental operation secret.

Having become a man, the patient did his best to emphasize his masculine appearance and to behave in a distinctly masculine way. His voice became much lower thanks to hormonal therapy.

"He wore trousers. He also took to visiting the hospital's garage, where he became friends with the drivers,” Kalnberz recalled. "He liked swearing, smoking and drinking in male company.”

The patient spent the rest of his life working as an engineer. He was married twice. When his wives asked him about his scars left from the operation, he would blame them on a car accident.

Kalnberz, meanwhile, had to go through several inquiries, which could have completely ruined his career and his entire life. Luckily, he got off with a stern reprimand. The surgery he had performed on Inna was kept secret for 20 years.

He finally retired at the age of 80. The so-called intimate surgeries were just one of his areas of specialization. He treated Russian cosmonauts, and made one female patient’s shortened leg longer by a whopping 60 centimeters (24 inches). But every reference book always lists the unique sex-change operation he pioneered.

Kalnberz said he believed that sex change is being taken too lightly today.

“I am simply horrified by the situation,” he admitted. “There are no restrictions, no controls — as soon as someone starts feeling an attraction to a same-sex partner, he or she is free to run to a surgeon and demand an operation. And the surgeon is ready to do it, provided that the patient has enough money to pay. But I have to say that for some people, such an operation is the only option. I mean, for example, those afflicted by 'malignant' trans-sexualism. I have performed five such operations in my life. And I am confident that in all five cases, such an operation was a vital necessity for the patient."