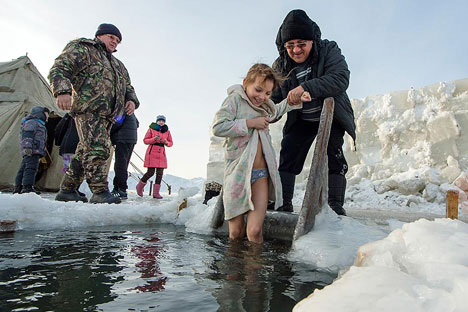 Russians all over the country was diving into the frozen water on Jan. 19. Source: AP

The Orthodox Epiphany is the right occasion for Russians to battle frigid temperatures, and undertake the yearly tradition of dipping in a hole cut into a frozen river.

At 21 degrees below zero Celsius, mobile phones stop working and a thin layer of white frost appears on eyelashes. For many Orthodox Russians, it’s perfect weather for a dip in the Moscow River.

Some mothers are making their way forward through the trees, pushing their strollers in the snow. Over the curve outlined by the Moscow River, there are the morzhi, walruses, as they are called in Russian, or those who dive into the river’s icy waters. This year, in Moscow, on the day Christ was baptized, they totaled 100,000. There were, however, 60 cross-shaped holes dug for the Epiphany (called iordan).

At the Serebryanyj Bor, the forest to the east of the capital, more than 2,000 beliers have taken a dip in a few hours.

"The first ones have just arrived tonight. Then the ritual continued nonstop the whole morning.“

A firefighter explains one of the most popular and impressive Russian traditions without taking his eyes from the baptismal springs, where men and women reappear in bathing suits. "This is how Orthodox Christians reminisce about the baptizing of Jesus Christ: they dig holes in the ice,” he says. On the night of January, a priest blesses the water into which the believers dive in the next day.

"The temperature shock can be dangerous. Doctors do not recommend diving to people with heart disease. In the past people used to get sick, but today there have been no problems," he says.

Assisted by two security guards, a woman slowly walks down the wooden staircase that leads to the Iordan, which is the Russian named for Jordan, as in the Jordan River. She makes the sign of the cross. Then she holds her breath and dips her head three times. “In the Name of the Father, the Son and the Holy Spirit.”

As she comes out of the water, a cloud of steam escapes from her body. She covers herself with a towel and slowly, quietly, moves towards the two heated tents where the faithful get undressed and drink tea.

Inside the tents people exchange tips, laugh and offering steaming cups cold water to those up coming out of the cold water.

"Leave your fur coat here. Just go in your swimsuit and cover yourself with a towel," a woman tells a younger girl. There is a boy of about six years of age in a bathrobe, jumping and stomping his feet on the ground. This is his first time. "I wonder if he will remember it for the rest of his life," asks the woman.

A girl walks in through the entrance of the tent, shivering and dripping. She has black makeup smudged below her eyes. "I do this every year. I'm not a believer. I do not dive for religious reasons, but because it is very good for your health,” she explains. “I do not prepare myself physically, only psychologically."

Outside, the people continue to dive in the water, and those with families come again. Because of the cold, quite a few cameras switch off.

There are also two Italians working in Moscow, who have decided to experience the thrill ofIordan. “I cannot feel my feet,” says Federico Fanti after bathing.

"It really is not as terrible as it sounds," adds Mark Minoretti, rubbing his hands trying to warm them up. “You feel really cold when you are undressed. Then, as you come into the water, the feeling is almost pleasant. In fact, I went in twice. When we came back to the tent, after the swim, the Russians complimented us and offered us tea to warm ourselves up."

As RIA Novosti reports, a total of 116 security personnel and 2,500 police and security forces were employed to keep an eye on bathers in Moscow during the Epiphany celebration.