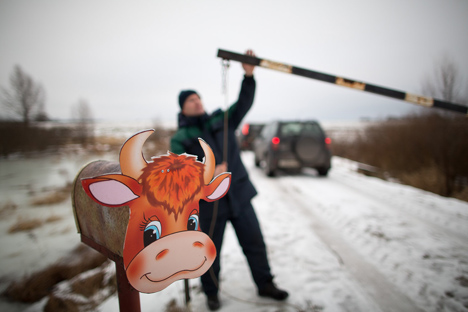 A family is pioneering a project that brings 21st century farming methods to a Russian backwater, and they are reaping the rewards of their efforts

Far away in the Kaluga Oblast, about a hundred miles from Moscow, retired armed forces captain Andrey Davydov has built his own village. At its center is a successful cattle-rearing enterprise, a model farm that is visited by agriculturalists from all over the world.

Proudly showing us around his acreage, Davydov tells how it all began: “In the 90s we made a decision to leave Russia. I had just left the army, and had earned some money selling books and matches—back then people traded in all sorts of things—and my wife Marina and I started thinking about where we should emigrate. We liked the idea of Canada. And so we went there to investigate the place for ourselves.”

While there, the couple also looked into Canadian agriculture. “I saw a dairy farm and realized I would not be able to deal with all the milking, filtering, pasteurizing, and cooling. I thought about pig farming, but it’s massively hard work, and you need to keep thousands and thousands of animals to make ends meet. It’s the same story with potato growing—we’re talking huge fields, expensive packing and sorting equipment, a lot of stress for little return.

“Finally I looked around beef farms, and liked what I saw: simple barns, pastures, rusty wire fences, and these magnificent Hereford cattle. And this gets me thinking that if I were to keep the same animals back home in Russia, I’d become a millionaire. All I’d have to do is sell them to our local meat factory in Kaluga. And I wouldn’t even have to emigrate,” he said.

Canadian bulls, Russian soil, and the personal grit and determination of the Davydov family have proved a winning combination. The remote Kaluga village of Baranovka has been placed firmly back on the map, having been completely abandoned in the 1960s. All that remains of its past as a Soviet kolkhoz (collective farm) are a few concrete ruins and an old lamppost.

Baranovka in the 21st Century

When the retired army captain arrived with his wife and children in tow, he bought a piece of land, put up some buildings, and started breeding beef cattle. It was so successful, it turned out, that his production costs are just a third that of his competitors on neighboring farms.

The Hereford cattle were quick to adapt to the Kaluga climate—with a thick woolly coat and a dense undercoat, they are well-equipped for the harsh Russian winter and hardy enough to be kept outdoors all year round. There are neither cowsheds nor shelters, just electric fences sectioning off the open pastureland.

Chickens are also reared on the farm, but more for their eggs than for turning a profit. As well as a chicken house and calving sheds, the Davydovs have built a road leading from the motorway, and have connected their farm to mains electricity with high and low voltage cables and a transformer station. One of the new buildings is a specialized calving unit.

“This year we set up a video surveillance system with a Wi-Fi router. It’s now possible to supervise the calving process via the Internet from the comfort of our own living room. A useful invention! In 1998 we lost about a fifth of our newborn calves, mainly due to the laxity of our staff. Their attitude was ‘whoops – another casualty,” and they’d shrug and move on to the next task. But now that we have cameras, it’s possible to monitor both the cow and the farmhand, and calf mortality has almost entirely ceased to be an issue.”

As city people, the Davydovs had a lot to learn when they embarked upon their new venture. And they are just as enthusiastic now as they were to start with.

“We take advanced training courses in cattle-rearing, attend international conferences, and subscribe to specialist journals from America,” the farmer said.

“I find it amazing that people here in Russia, especially in the countryside, have failed to move with the times,” Davydov said. “So for instance, you can sit down and consider your options: do I buy electric fencing (an investment that will pay off over just one season), or do I continue to employ several dozen alcoholic cow herders? It turns out very few people actually take the time to weigh this up.”

Can’t get the staff

Housing in Baranovka consists of four small brick buildings. One is home to the farm’s owners, the second is lived in by their daughter and son-in-law, and the other two are occupied by farm workers.

Interestingly, both the Davydovs and many other farmers in the Kaluga region are constantly short-staffed — reliable tractor drivers are an increasingly rare breed, for example. The general trend is for people to leave the villages in favor of life in the big city, and those who remain are less inclined to put in an honest day’s work.

Baranovka, where 10 people are now registered as official residents, is still something of a work in progress. There is high staff turnover, and the village is sometimes raided by people who do not respect the concept of private property. But whatever the problems, come rain or shine, you’ll see Andrey and Marina in Wellington boots, working from dawn until dusk to fulfill their dream.