How Russian students prepare for exams 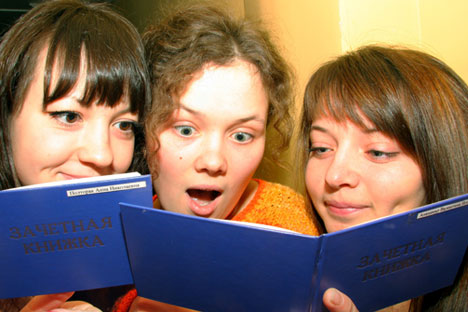 Having successfully passed the exam, the lucky student must give a high five to his pals still awaiting their turn. Source: ITAR-TASS

RIR has compiled a list of the most famous traditions and superstitions among Russian students.

It’s almost February and the exam season is about to descend on students across India. Like their Indian counterparts, students in Russia tend to follow rituals and be superstitious. RIR has drawn up a list of the most popular traditions and superstitions among Russian students. It is worth noting, however, that not every student abides by these traditions, though many readily admit to being superstitious.

1. “Don’t wash your hair ahead of exams, or you’ll wash off all the knowledge.” Obviously, female students suffer from this particular tradition more than their male counterparts. To ameliorate the nuisance, many come to the exams wearing a cap.

The tradition also insists that for best effect, students should avoid cutting their hair or even shaving ahead of exams. Some go as far as wearing the same clothes all through the exam period, which can last a couple of weeks. By the end of week two, some of them look slightly the worse for wear, but they like to think that profound knowledge is sufficient compensation for bedraggled looks.

2. There is a statue of a border guard and his dog at the Revolution Square subway station in Moscow. Rubbing the bolt of the border guard’s rifle or the nose of his dog is said to bring copious amounts of good luck at the exams. Anyone who has seen the statue knows that the dog's nose and the bolt of the rifle have been polished to yellow sheen by generations of student pilgrims.

3. Keeping an open textbook under the pillow on the night before the exam is said to be a reliable method of augmenting knowledge retention. Pure and unadulterated data apparently flows from the book straight to the student's brain via sublime metaphysical channels. If the exams are in winter, a related superstition is to decorate the Christmas tree with notes taken during the lessons.

4. Students who cultivate indolence as a virtue often rely on the “catch the ‘halyava’” method. Halyava is a fairly popular concept that essentially boils down to getting something for nothing. At midnight before the exams, Russian students can sometimes be found waving an open exam record book (known as ‘zachotka’ in Russian) and shouting, "Halyava, come here!" In hostels the ritual is often complicated by the presence of rival halyava-catchers, who yell "No halyava for you tonight!" from their own windows.

5. After dangling the open zachotka from the window, students are required to close it in a deft and rapid movement, thereby trapping the halyava that might have wandered inside. Zachotka must then be kept closed until the exam; in fact, it's better to tie it up with a ribbon to prevent accidental opening. The first person to open it must be the examiner, otherwise halyava will escape. Uncooperative examiners often require the students to open their zachotkas themselves, and place them on the desk wide open, thereby ruining the preparations.

6. For best results, students must take their exams in a particular order. Taking the PT exam first is not recommended; the students who do that risk "having to run around through the rest of the exams". In other words, they are unlikely to succeed at their other exams on their first try.

7. Another arcane tradition is called "Face into your porridge." On the morning of the exam, breakfast must consist of Hercules porridge with blackberry jam. Student hostels are full of macabre stories about the woes that befell the unfortunates who were foolish enough to substitute blackberry with raspberry, or to break the tradition in some other unthinkable way. Finally, as the name of the tradition suggests, a diligent student must plant his or her face straight into their porridge and then eat whatever remains in the bowl before washing their face.

8. There is a strict procedure for drawing the cards that contain the exam questions. It must be performed with the left hand, while standing on the left leg. This must be done inconspicuously, lest the examiner notice and decide that the student relies more on blind luck than diligent study.

9. Having successfully passed the exam, the lucky student must give a high five to his pals still awaiting their turn; this is the approved method of passing around good luck.

10. Once the exams are over, notes taken during the lessons are piled into a heap and set aside. The students who jump over the bonfire greatly increase their chances at the next exams – or so it is said. Those who prefer to take their notes using laptops or iPads tend to question the efficacy of this particular procedure.