Russian tourists: Goa cabbies up in arms against tour operators 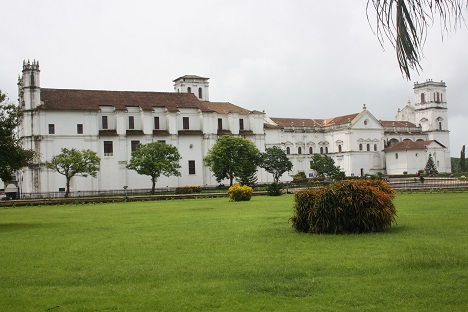 Taxi drivers in the northern part of the state claim that illegal tour operators are ‘poaching’ Russian tourists from them. There are also growing complaints of foreign tourists illegally engaging in business activities in the state.

Since December, friction had been building up between taxi drivers in Goa and tour operators who make alternative arrangements to ferry Russian tourists.

Local taxi drivers from the northern part of the state have periodically stopped cabs belonging to transport companies and tour operators, harassing drivers and threatening tourists sitting inside.  This culminated in protests this week, with several hundred North Goa taxi drivers flooding the streets of Calangute demanding that authorities take action against tour operators, including those illegally run by Russians. The local taxi drivers say the tour operators are depriving them of their livelihood. Other protesters blocked several roads across North Goa preventing other cabs and mini-buses carrying tourists, mostly Russians, from passing. This has led to panic among tourists and tour operators, with guided tours and outings planned for Russian tourists beforehand being cancelled.

Representatives of local taxi drivers complained to Goa Chief Minister Manohar Parrikar about illegal tour operators and about foreign tourists working illegally as guides and interpreters.  The tax drivers are demanding that the authorities put a stop to illegal activity. While the talks between taxi operators and the state’s authorities remain inconclusive, industry players are eager to know what decision Parrikar will take on these issues.

Local media reported that after the first meeting with taxi operators in Tuesday, January 28, Parrikar has proposed a dedicated squad to clamp down on foreign nationals engaged in illegal employment in Goa. RIR could not independently confirm the accuracy of these reports.

The Russian Information Centre in Goa in a public notice mentioned several cases of deportation of Russian nationals working in Goa on business visas. “We have witnessed several cases in the past few days when Russian citizens, employed by Russia’s largest tour operators and assigned 6-months work in Goa and thus having valid documents prescribed by the law, had been deported from Goa,” the centre said in a press note. “We believe that toughening measures against Russian nationals with use of police forces instead of solving the problem of illegal business in Goa through lawful procedures will lead to the situation where all companies working with Russian tourists in Goa, both legal and illegal ones, will suffer.”

Fighting the legal battles of Russians in Goa

In the first day of the mass protest, the driver of Surya Travels, a registered tour operator, was beaten up by fellow taxi drivers from north Goa.  Eleven Russian tourists in the mini-bus driven by the unfortunate driver were not allowed to come out of the vehicle by the protesters.  The injured driver was taken to police station where he had spent all day without any medical assistance. Later it was found that his arm had been fractured. His offenders, however, were detained but released soon from the police station.

“First it was declared he had a minor injury, the police registered a case under Section 323. Later we took him to another hospital and doctors confirmed the fracture,” Vikram Varma, an advocate who represents many Russian nationals and companies in Goa, told RIR. “I immediately filed the complaint with superintendent of police. The next morning an FIR was filed and section had been changed to Section 324 which means the offenders have to be arrested and produced in the court. They cannot get away just like that,” Varma said.

The fact that legal action was taken against the attackers has shaken the confidence of the protesting taxi drivers who were earlier relying on police protection. “Taxi drivers as well as the police got a clear message. The equation will change, there is no doubt about it,” Varma added.

Several tour operators confirmed that there were similar cases when cab drivers carrying Russian tourists were harassed by groups of local taxi drivers, however, only in one case was an FIR filed.

There are no reports of Russian tourists being attacked during the protests, however, a Russian citizen who is doing business in Goa was allegedly mistreated by police. Victor Albuquerque, the Honorary Consul of Russia in Goa sent a letter to the chief minister asking him to look into the matter.

“It is the government’s duty to define what is legal and what is not,” Albuquerque told RIR. “Any matter of illegal business activities has to be reported to the concerned authorities. Nobody can take the law in their own hands. If someone is doing legal business as per the law, nobody should be in a position to interfere with this business,” Albuquerque said.

“The current situation should be taken care of in the interests of the whole tourism industry, and the name of Goa should be not spoiled, not only in Russia but other countries too. This all lies in hands of the chief minister and he will definitely advocate the interest of state, in the interest of foreigners to find a compromise,” he added.

“Earlier the fact that taxi operators could cheat foreigners gave them a lot of confidence, they were able to earn good money, take loans and buy cars,” Varma said. “Now when they cannot cheat and earn as much as they used to, they cannot repay the loans, and they feel it’s not fair.”

The Goa government earlier proposed installing meters or implementing fixed fairs for taxi operators, but such proposals were refused by taxi owners.

“Russian tourists don’t speak English and they need Russian translators. So either the government has to provide thousands of translators, or let the Russians come and make all appropriate visas and documents, and work,” Varma added. If it’s not done then Russians can look at other tourist spots in India where they are welcomed. If the situation is not resolved, Russian tourists will leave Goa and many businesses will suffer. The same taxi drivers won’t be able to pay their loans because local tourists are not going to pay them as much as foreign tourists had to pay.”

“The story with taxi drivers protesting against Russian tour operators is at least 3 to 4 years old. Why it has grown to such a  big scale is probably because there are more Russian tourists coming to Goa every year and with that a mushrooming of illegal companies,” Ekaterina Belyakova, who runs the Russian Information Centre said.

She admits there are companies established by Russian-speaking people who are not only Russian citizens but citizens of former Soviet republics, especially Ukraine and Kazakhstan. These companies either do not have any legal registration or their papers are not in full compliance with all the required stipulations of Indian law.

“This fact has been a cause of concern for those legal Russian companies who work in full compliance with Indian laws. There are such companies that have Russian managers on board, which follow the laws of the state, pay taxes and also employ Indian citizens. And they fully support the will of Goa business community to remove illegal companies from the tourism sector,” Belyakova added.