Visa-free entry will be allowed via 11 Russian airports. Source: Photoxpress

The Russian government is working on a bill that will enable foreign tourists arriving in Russia by train to enter the country without a visa for up to three days. Experts say the initiative will bolster the tourism industry's revenues and tax receipts.

The Russian government may soon waive the visa requirement for foreign tourists arriving in Russia by train who intend to stay in the country 72 hours or less. A bill proposing such an initiative has been submitted to the Russian State Duma. The initiative is backed by several Russian government agencies, including the Ministry of Transportation, the Economic Development Ministry, the Regional Development Ministry, the Ministry of Foreign Affairs, the Federal Migration Service and the Federal Tourism Agency.

The bill’s supporting documents say that the number of tourists entering Russia rose after a similar measure was introduced for passengers arriving by cruise ships and ferries. Easing the visa requirements for passengers traveling by train should increase the inflow of tourists in general, but particularly to many Russian regions outside Moscow and St. Petersburg.

Another bill, which will allow visa-free entry for up to 72 hours to transit passengers arriving in major Russian airports has already passed the first hearing in the Duma. However this waiver, if passed, will apply only to passengers from certain countries, including several EU states (Germany, Italy, Spain, France, Finland, Belgium, Poland, and Sweden) as well as the United States, Canada, Australia, Japan, China, South Korea, and Singapore. Visa-free entry will also be allowed only via 11 Russian airports, including three in Moscow (Domodedovo, Sheremetyevo, and Vnukovo), as well as St. Petersburg Pulkovo, Kazan, Yekaterinburg Koltsovo, Adler-Sochi, Khabarovsk Novy, Novosibirsk Tolmachevo, Vladivostok Knevichi, and Kaliningrad Khrabrovo. Finally, the 72-hour visa waiver will be offered only to those foreign passengers who travel with Russian airlines. According the government, this requirement was added to support Russian air carriers. 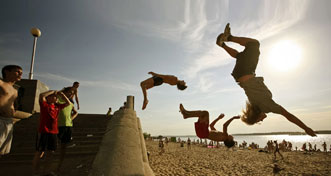 The government has yet to finalize the terms of the visa waiver for tourists arriving by train. “To attract more tourists to Russia, the 72-hour visa waiver could be offered to all foreign citizens who have a return ticket," said Russian tourism agency chief Alexander Radkov.

Experts say the new measure will reduce the visa application processing times at the Russian consulates and increase the treasury's tax receipts from the tourism industry. “Given how vast our country’s territory is, and given the length of its borders, waterways and railways, we are losing huge amounts of money because of the visa restrictions,” said Alexandr Starovoytov, deputy chairman of the Duma select committee for transport. "Once the bill has been approved, the new measure will increase the number of tourists travelling to Russia."

This article is based on reporting from the newspapers Rossiyskaya Gazeta and Kommersant and the fontanka.ru website.