Two ordinary Russians prepare for a one-way trip to Mars 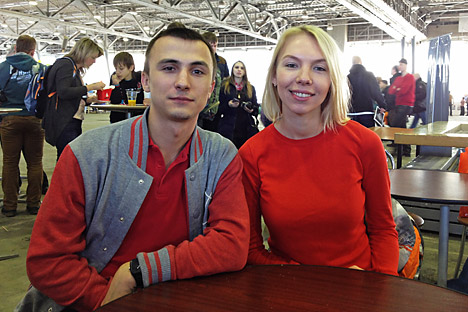 A journalist and an IT specialist who have applied for the Mars One project talk to RIR on what they would take on the space mission, what political system there would be on Mars, and their views on coming back to earth.

Journalist Anastasia Stepanova from Moscow and IT specialist Artem Goncharov from Voronezh are among the 1,058 people who have passed Round 2 of cosmonaut selection for the Mars One mission. In an interview with RIR, Goncharov and Stepanova describe what it is like to prepare for the hardships of the life and death of Red Planet colonizers.

Russia & India Report: The first and probably the most obvious question: Why did you decide to apply for Mars One?

Anastasia Stepanova: I heard about this project in 2013, in a TV news report. At the time I was thinking of what to do with my life. I realized that my dream of becoming a cosmonaut would never come true: I am a journalist; I am not a scientist or some super valuable expert to be selected to go into space.

And I am no millionaire to be able to afford to go as a space tourist. And then I hear on TV that anyone has a chance! I thought it was a sign and decided to apply.

Artem Goncharov: I learned about this project back in 2011. I was sitting at work, reading space-related articles on Wikipedia and suddenly came across an article about Mars One. This is how it all began for me.

RIR: In other words, you both from the very beginning were interested in space exploration. How did that interest arise? Are you sci-fi fans? Or was it like in that old Soviet joke: all boys in the Soviet Union dreamt of becoming cosmonauts because that was the only way to get out of the country?

A.S.: Not at all. I don't think that was what Soviet boys were dreaming about. They dreamed of becoming heroes, of doing something significant with their lives. This is what we are dreaming of too. I admire people who lived at that time.

To me, they are heroes who were not afraid to follow their dream and who achieved what they set out to achieve. I would like to see more of that now, instead of the dry pragmatism that is everywhere these days. I, for one, am not trying to escape from my life on Earth, I enjoy my life. It's just that I have always thought that there are bigger things for us to do.

A.G.: I have always lived in a world of fantasy, not just to do with space. For example, I once had a dream of living under a dome with a green lawn, a river and a water mill. This is what I saw in this project, and that was what prompted me to apply.

All the more so since this project is a unique opportunity to do something truly great. We shall be the first to fly to another planet and in a matter of just two years, from scratch, prepare a base for other people to arrive there. It's just fantastic.

RIR: If you were allowed to take just one thing with you to Mars, what would it be?

A.S.: And I would take a cat, although they most likely won't let me. But I would really love to take a cat. I hope that for the sake of the experiment we shall have some pets traveling with us.

RIR: The final crews are likely to be formed in such a way so as to comprise representatives of different countries and cultures. What do you think the political system on Mars will be like?

A.S.: I think every crew should have a captain who will be taking important decisions. The captain should be an intelligent and extraordinary person…

A.G.: So it will be a monarchy! Seriously speaking, I think each crew of four will have people from four different continents.

A.S.: But there should be at least one Russian on every crew! And definitely one American.

RIR: And what about giving birth to a new life on the new planet?

A.S.: So far it is not even being discussed. It is very risky. Even if a woman manages to give birth there, it is not clear what will happen to the baby, what it will be like.

A.G.: One could of course try. But I cannot imagine how it can be possible given the gravity and level of radiation there.

RIR: This project has many critics; some even call it nothing else but a "mass suicide." How do you feel about the fact that the participants in the project are not supposed to come back from the Red Planet?

A.G.: People always try to stop those who are trying to do something out of the ordinary. They must have tried to stop the first explorers who were setting off on the first journey to America or Australia.

And there are always people who say: you will fail. But other people always manage to cope with life's difficulties and achieve their goal.

A.S.: My motto is to see outer space and die. I won't mind dying once I have fulfilled my dream. That is not to say that I am suicidal: I love life. But I am not afraid of dying on Mars.

RIR: And what if it becomes possible to return to Earth?

A.G.: What for? Imagine, you have lived there for, say, 50 years; all your connections with Earth will have been lost by then. To come back just for the sake of once again seeing blue skies above one's head? I am not sure. Except to come back to see the younger generation of one's family. Otherwise, I see no point in that.

A.S.: All depends on the time we'll spend there. In any event, it would be very hard from the physical point of view. I would come back if my parents are still alive then. Otherwise, no.