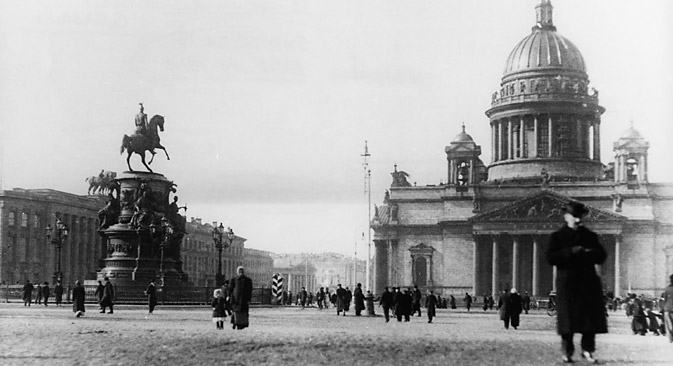 The first six months of 1914 were a kind of calm before the storm, but when the imperial capital of St. Petersburg exploded in July, the results were swift and catastrophic.

The year 1914 began without any particular sense of foreboding. Russia’s attention was fixed on sports rather than politics. Berlin was hosting the world skating championship and Vasily Ippolitov was among the medalists.

There was also a men’s figure skating event in the Finnish capital, then known as Helsingfors; and a women’s skating competition in St. Moritz, Switzerland. The Russian soccer team played friendly matches against Norway and Sweden.

The political situation in Russia seemed calm on the surface. The economy was growing at an unprecedented rate of between 10-20 percent. According to British journalist Maurice Baring, who was reporting on the situation at the time, Russia was going through an unprecedented period of prosperity, and there had never been a time when the vast majority of Russia’s citizens had fewer reasons to complain.

There was, however, a strict class system in the Russian Empire that severely restricted social mobility. The workers had no hope of breaking out of the ranks of the proletariat; farmers craved ownership of the land they had worked for centuries, but belonged to a few wealthy landlords. Ordinary people seemed ready to riot at the slightest provocation.

According to the diary of Russian Emperor Nicholas II, the year 1914 began much like any other. Nicholas wrote that on many occasions he had “joyful opportunities" to see Grigory Rasputin. On the day of German Kaiser Wilhelm's birthday the emperor had a breakfast with the German ambassador.

Nicholas II met the New Year in the town of Tsarskoe Selo outside St. Petersburg before heading for the Crimea. “We have inspected large herds of livestock, cows and horses,” the emperor wrote. “We also saw aurochs and bison, as well as zebras.

I had my head spinning from so many impressions and such an astonishing variety of animals.” After the trip to the Crimea, the Russian royal family visited Romania before returning to their palace at Peterhof and sailing to Finland aboard the royal yacht.

According to his diary, the emperor worked a lot, and took great pleasure from his leisure time. "We assembled puzzles from wooden bits, and then played dominoes and dice," he wrote. He and Crown Prince Alexei built a snow tower on their frozen pond at Tsarskoe Selo.

When winter turned to spring, they bathed an elephant in that same pond. Other warm-weather entertainments included canoeing, swimming, and playing tennis. The emperor diligently recorded the results of his royal hunts: “Pheasants - 33; partridges – 22; rabbits – 56 in total”. After sunset the royal family would often watch “funny and interesting cinematography.”

Cockfighting was all the rage among the St. Petersburg merchant class at the time. “The cocks square off, then throw themselves against each other, furiously pecking and striking with their legs and wings, until one of them falls to the ground, all bloodied, or saves itself by means of shameful retreat. The owner of the winning cockerel can make 10-15 rubles a day,” the emperor wrote.

In the 200 years since Peter the Great ascended to the Russian throne, the country had become one of Europe’s cultural powerhouses. During the reign of Alexander II, the West recognized Russian music and literature.

The great actor Konstantin Stanislavsky was the envy of every theater in the Western world. Serge Diaghilev gave the world the Ballets Russes. In 1914, Russia’s artistic achievements appeared to reach their zenith. The country’s artists and poets were famous all over the world.

Although the country even had its own equivalent of Pussy Riot. Many public readings of poetry would end in scandal.

“What if I, an uncultured barbarian, refuse to play entertaining antics before you tonight? What if I break into laughter and spit right in your face? I am a wastrel of precious words,” wrote the poet Vladimir Mayakovsky.

The past in retrospect

After 1917, many began to look for – and to find – the harbingers of the later catastrophe during the seemingly peaceful first half of 1914. To many, it seemed obvious that the calm and orderly streets of St. Petersburg in July 1914 were like a thin crust on top of a boiling lava flow that would eventually break free.

Peter Durnov, the tsar’s perceptive former interior minister, gave this warning to Nicholas II: “The peasant dreams of getting ownership of somebody else’s land for free. The worker wants to grab the factory owner's entire capital and profits. They have no dreams beyond these purposes. If we allow these slogans to gain popularity among the masses, if the government allows the hotheads to agitate with impunity, Russia will be plunged into anarchy.”

On July 7, 10,000 workers in St Petersburg went on strike. By July 10 that number reached 135,000. Workers in Baku soon joined the protest. The main demand of the protesters was the abolition of the monarchy; the strike soon degenerated into violent rioting.

Protestors (described by Vladimir Lenin as “young workers”) stopped all trams in St. Petersburg. One tram driver was stoned to death. Some 200 of the city's 600 tram cars were damaged. Most people commuted via tram, and without the tram lines, there was no transport cheap enough for workers to use. The city’s plants and factories shut down.

The police were unable to control the situation. Fights often broke out between police officers and rioters. The strike ended only when World War I began.

Some historians believe that had the Duma members supported the strike, the political transformations in Russia would not have been as bloody and catastrophic as they turned out to be in 1917. Some also argue that Russia would not even have entered World War I.

On July 25, Nicholas II wrote in his diary: “On Thursday afternoon, Austria put an ultimatum to Serbia; it made several demands, including eight that are unacceptable to any independent state. The deadline for Serbia to comply expired today at 18:00 hours. All the talk everywhere is about what happens next."

The emperor hesitated for a while, but then made a fateful decision. As a long-standing ally of Serbia, Russia put its own ultimatum to Austria. Berlin threw its weight behind Vienna. A week later Germany declared war on Russia; in 10 days’ time the conflict had spiraled into a world war.