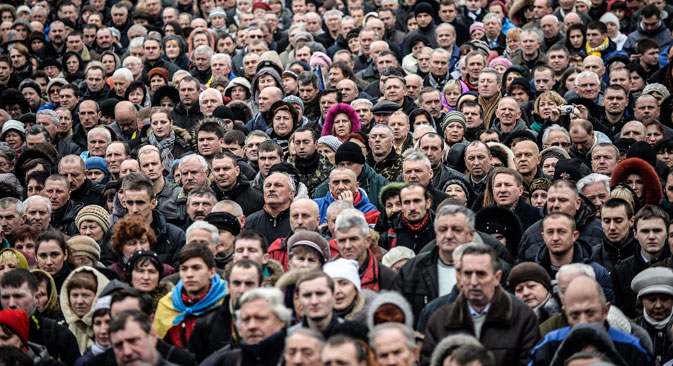 Many Russians have a little bit of Ukrainian blood, and in Ukraine, many people have Russian relatives. Source: AFP / East News

For many people in Russia, the current crisis in Ukraine is not just a political issue, but also a deeply personal one.

My wife, Ira, is Ukrainian, and my parents are also from Ukraine. We have many relatives there. They live in the west (Volyn, Lutsk), in the center (Kiev) and in the east (Kharkiv).

Our grandfathers, who used to live in the west, remember the Soviet times when they lived on prosperous collective farms. Now almost all young people have left for Portugal or Poland, the life of those who stayed behind is not very good.

Vox Pop: The fate of Ukraine

Our relatives in Kharkiv are active revolutionaries, passionate supporters of the Batkivshchyna [opposition political party led by Yulia Tymoshenko]. They transferred onto us all the sins of Putin’s policies over last 10 years – “why do you switch off the gas” and so on.

My first cousin once removed lives and studies in Kiev. He has not gone to the Maidan, but rather tries to study. [At his school], older students did not let freshmen go “under fire” – they locked them inside the dorm and guarded it, not to let them take the risk of getting hit by bullets.

The news about the upcoming referendum led to a short message on Skype from Kharkiv – “Invaders”. However, our relatives called us on March 8 and we spoke about life once again. In general, this is a real circus.

My grandmother is Ukrainian. She came to Moscow in the 1930s trying to flee the famine. She got married, had four children. My mother, her sisters and brother spent every summer in Ukraine when they were children and teenagers. They spoke Ukrainian as well as Russian. We still have their childhood drawings of huts and cherry orchards.

Even now, we have many relatives there, sometimes they come to visit us, bring unusually tasty homemade jams and fruit as presents. My mom and aunts also try to visit Ukraine at least once every few years, as it is an equally native country for them as is Russia.

After the Soviet Union collapsed, my family could not get used to the fact that Russia and Ukraine were no longer the same country.

I think it is difficult to find any person in Russia who would not have at least a little bit of Ukrainian blood, and in Ukraine, especially in the cities, many people have Russian relatives.

They both moved to Moscow 65 years ago, but they have retained a very strong connection with Ukraine.

We have a house in Cherkasy. I spent all my summer vacations there. We swam in the Dnieper [River], climbed a huge walnut tree that grew in the yard and tried to taste all the numerous varieties of Ukrainian ice cream.

I met my first love in Cherkasy. We also went on our honeymoon there. And my husband and I hung a lock, with our names written on it, over the Dnieper.

I love Ukraine. This is the place where my soul rests. Now I try to go there at least once a year.

I lived in Crimea for 10 years, and now I live in Moscow.

As a matter of fact, Crimea has always been Russian. Not even from the point of view of the territorial belonging, but in the identity of the people.

Now I have a lot of relatives and friends there. All are keeping a low profile and waiting for the referendum now. The connection between us is strong; one country is one country no matter how much it is sawed up.

My grandparents moved from the Ukrainian Soviet Socialist Republic when my mom was still a baby.

My mother got married in Arkhangelsk [in Russia], but later, after my grandmother was appointed the director of the maternity ward in the city hospital in Kherson [in Ukraine], we moved there; me and two my sisters were born there.

Ukraine has never been and will never be the “abroad” for me; we have too many links with Ukrainians. Nevertheless, we felt changes immediately after the collapse of the Soviet Union.

My elder sister and I were born in 1985 and 1987, and our youngest sister was born in 1993. Our parents had no problems with the registration of the elder children at the place of birth.

However, they were refused registration of our youngest sister. She could be registered only after we returned to Archangelsk, and now it is written that she was born there in her passport, but in fact, she was born in Ukraine, like many members of my family.

Kharkiv is the hometown of my whole family, and my grandparents still live there today. I try to go there every summer, to my grandfather’s dacha. It is the best place on earth for me.

All are very worried now; we have never distinguished between Russians and Ukrainians, due to the history of our family. However now, my grandmother, who lives there, feels resentment towards Russia.

She says that she had gone to speak to supporters of the Maidan, they turned out to be decent and intelligent people, and she liked them.

It is terribly sad that we can suddenly quarrel with our closest people because of someone’s political ambitions.

Who lives in Crimea? What language do they speak? Why are there so many Russian troops there? RBTH answers your questions.