Getting a multicultural education in Moscow 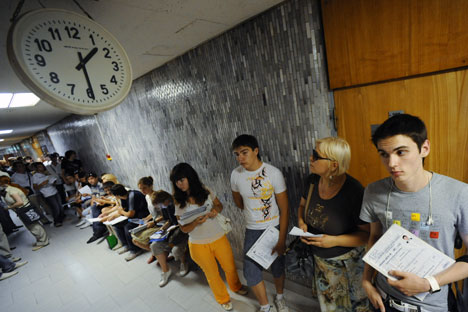 Vladimir Filippov, rector of the Peoples' Friendship University of Russia (RUDN), talked with Munzer Hallum of Russia Beyond the Headlines about the challenges of maintaining high standards of education and managing the needs of a diverse student population that hails from 147 countries.

Russia Beyond the Headlines: What has changed in the way RUDN prepares its graduates as compared with the Soviet period?

People’s Friendship University was established in 1960 as the Patrice Lumumba People’s Friendship University to provide higher and professional education for students from developing countries. Its first class, made up of students from 47 countries, graduated in 1965. Today it is considered one of Russia’s leading institutes of higher education with a student body of more than 29,000.

Russian degrees in engineering, physics and mathematics and medical science continue to enjoy recognition in the world because, in contrast to other countries, in Russia we have state standards of higher education. In other places, universities apply their own standards.

For example, when we were switching to the bachelors-masters system in Russia [from the old Soviet degree system], we decided to analyze international experience. In particular, we studied the teaching of journalism in 19 U.S. universities.

We wanted to know what exactly should be taught to future journalists. It turned out that only two subjects are taught in all journalism faculties: English and the history of the United States. All the other subjects differ.

In contrast, in Russia there is a certain guarantee of quality, that specific subjects will be learned and that an exact number of academic hours will be allocated to teach these subjects.

RBTH: Do you have enough staff to ensure compliance with these standards? What is the situation with personnel these days?

V.F.: We had a big problem with personnel in humanities, especially in the 1990s. As far as the scientific disciplines (mathematics, physics and chemistry) are concerned, we had some cushion. We fortunately had enough qualified teachers in the scientific and engineering disciplines.

RBTH: To what extent is RUDN connected with the labor market and with the real needs of society?

V.F.: Students from 147 countries are studying at RUDN this year. As the rector, I cannot take into consideration the needs of 147 countries; therefore, I have to give fundamental knowledge to these students, to enable RUDN graduates, on their return to their homelands, to work in public service industries, at universities or in business.

The advantage of a good university education is its basis in the fundamentals.

RBTH: What is the relationship between a career and coursework for those at RUDN?

V.F.: RUDN is a unique laboratory where students acquire experience working and living in international communities. What is especially important is the experience of interaction between different religions, different cultures and different races.

When acquiring professional knowledge, students get what is perhaps the most important thing in a person's life – contact with friends and colleagues from dozens of countries.

RBTH: What is the percentage of Russian citizens among the students?

Thirty percent of the Russians attend for free thanks to the state budget and 70 percent of them pay tuition and fees. This is a sign of public demand for a good education, in particular for a good knowledge of foreign languages.

In this regard, we have foreseen the needs and set a goal for ourselves: each person to graduate from RUDN should know at least two foreign languages.

RBTH: Are any courses taught in foreign languages?

V.F.: We have master’s programs in English and Spanish. We have some groups that are taught only in English from the first academic year to the last one, even in the medical faculty.

RBTH: How are students admitted to RUDN?

V.F.: In Soviet times, when political ideology played a big role, we admitted students on the recommendation of the relevant parties. At present, there is a special commission under the Ministry of Education and Science of Russia that reviews the case of every foreigner applying for admission as a student for a free state-funded place.

The requirement for admission is a score of at least 70 percent from the results of the school curriculum.