Tactical exercises by Russian Army are no more than war games 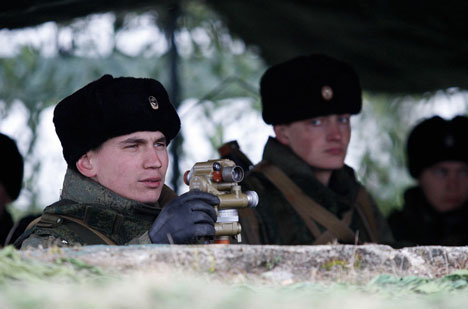 The principal aim of the drills is a comprehensive check of how forces interact in carrying out successive combat-training missions in an unfamiliar location and on ranges that have not yet been tested. Source: mil.ru

The timing and location of recent tactical exercises by Russian forces close to the Ukrainian border have aroused concern that they are the prelude to military action. In fact, they are part of a far wider series of battle drills and operational tests being carried out by the armed forces.

The tactical exercises recently carried out by Russia’s armed forces in the Rostov, Belgorod and Kursk regions of the country’s Southern Military District have attracted heightened international attention, with the manoeuvers drawing a particularly acute reaction in Kiev.

Ukraine’s Acting Minister of Defense Admiral Ihor Tenyukh even went so far as to suspect Moscow of preparing for an offensive. According to Admiral Tenyukh, Russia had allegedly amassed forces consisting of 220,000 troops, 1,800 tanks and more than 400 helicopters for these exercises.

The figures that he presented do not correspond to reality in any way. It was a month ago that President Vladimir Putin placed forces in the Western, and Central Military districts (which include the Baltic and Northern Fleets, airborne troops, military and space forces, fighter and military transport aviation) on alert for an unannounced inspection.

Admiral Tenyukh could not fail to have known that back on 7 March, four days before he made his statement in the Verkhovna Rada (Ukraine’s parliament), all forces that had participated in these exercises had already returned to their barracks. An official announcement was made about this by Russia’s Ministry of Defense.

Maybe this was the reason the Russian Deputy Minister for Defense Anatoly Antonov was forced to issue a clarification. “The UkrainianMinistry of Defense is already well aware that the Russian Southern and Western Military Districts combined do not amount to the numbers of tanks and combat helicopters cited by Mr. Teryukhin,” said Antonov.

“The number of personnel ‘deployed to the Ukrainian border zone’, was in all probability based on calculations that took into account the families of servicemen,” he added.

The Ukrainian military were offered the chance to fly wherever they wished in reconnaissance aircraft over this zone so that they would be reassured about the extent of the exercises and so that they would understand that Russia has no intention of concentrating significant forces and equipment to invade the Kharkov, Lugansk and Donetsk regions.

The Ukrainian military would have been able to see for themselves that they are seriously mistaken as far as Moscow’s true intentions are concerned.

In the meantime, the Russian Army exercises are not only taking place in the Rostov, Belgorod, Tambov and Kursk regions. For example, Russia’s airborne troops, more than 350 servicemen and four weapons platforms completed an airdrop onto the Novosibirskiye Ostrova (New Siberian Islands) in the Russian Arctic for the first time in the history of this branch of the armed forces, in temperatures of 30 degrees Celsius below zero – a feat achieved by no other army in the world before now.

Elsewhere, another detachment of airborne troops completed an airdrop into the Ulyanovsk Region, and another into the Rostov Region. Then those forces located closest to the Ukrainian border gathered up their parachutes and again boarded an Ilyushin Il-76MD aircraft to airdrop into the Yaroslavl Region a few hours later.

At the same time, pilots from the Central Military District carried out practice bombing raids on the Chebarukl range outside the Urals city of Chelyabinsk.

Read more: Appeal of military life on the rise

Back in the Southern Military District, artillery and rocket specialists from all military districts trained by opening fire from an enclosed firing position on 10 ranges. They employed direct fire from Grad-M, Tornado, Uragan, and Smerch multiple rocket launchers, Msta-S 152 mm howitzers, Rapira 100 mm anti-tank guns and the Nona self-propelled gun. The majority of this live firing was carried out at night.

Head of Rocket Forces and Land Based Artillery Major General Mikhail Mikhailovsky announced that his servicemen are carrying out more than 50 tactical exercises and 20 control drills on firing and gun control.

According to the Russian military, the principal aim of these measures is to administer a comprehensive check of how forces interact in carrying out successive combat-training missions in an unfamiliar location and on ranges that have not yet been tested.

Both commanders and servicemen in motorized, artillery and tank detachments gain experience in marching from their permanent base to the appointed regions, and in subsequently deploying in an unfamiliar location. Specifically, issues of interaction with representatives of Russian Railways can be solved, as well as the idiosyncrasies of loading military hardware onto rail freight cars.

These planned practical drills develop best practice for servicemen in operating military and special equipment, carrying out reconnaissance of transport links, engineering reconnaissance, fortification of a position and special tactical training as part of their assigned units.

Particular attention is to be paid to secrecy in terms of the deployment of detachments and camouflage in places where forces are concentrated and where the exercises are due to take place.

At the moment commanders are developing a way of managing different types of conflicts, detachments and gun control to achieve combat objectives. This case requires the creation of a complex environment that is similar to a real combat situation and which imitates the actions of a fictitious enemy.

In the closing stages of these battle drills servicemen work through a series of complex exercises in the operational coordination of detachments, weapons training with live firing and also in their commander’s ability to control artillery fire.

These exercises are due to continue until the end of March.