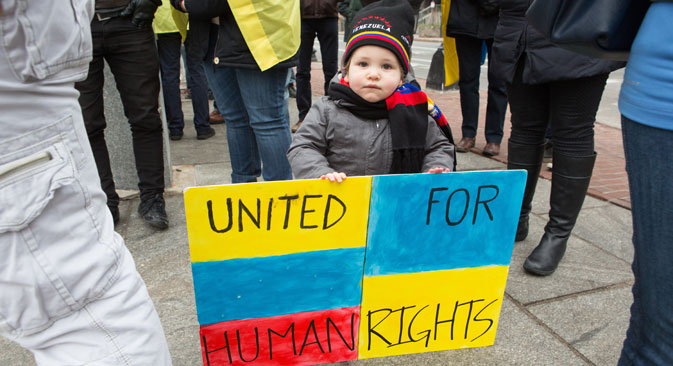 For many Russians and Ukranians, the current crisis is not just a political issue. Source: Corbis / Allover Press

Immigrants to the U.S. talk about the crisis in Kiev and Crimea.

For many Ukrainian-Americans and Russian-Americans, the crisis in Ukraine and the annexation of Crimea are political but also deeply personal. Russians and Ukrainians in the diaspora and abroad are connected; their lives and those of their friends and families are intimately intertwined.

RBTH asked about their stories. What do they think of the recent referendum in Crimea and its annexation to Russia? What are their hopes for the future?

Anatoly Ulyanov is Ukrainian. Born in Lviv and raised in Kiev, he is seeking asylum in the United States. The journalist, 29, had been physically attacked for his criticism of government censorship in Ukraine; he now lives and works in Brooklyn.

"It affects me on all levels. I have my family in Ukraine and most of my work is dedicated to that region. I’m facing the threat of being sucked back into that unfolding war zone and killed because of my work against conservatism for a new, diverse and modern society.”

“The results of the referendum weren’t surprising for me at all,” Ulyanov said. “After the fall of the Soviet Union, Ukrainian Russians from Eastern and Southern Ukraine faced an identity crisis. All these years, they have existed somewhere between an uprising of Ukrainian nationalism and nostalgia for the dead Empire. Every Ukrainian government preferred to use and escalate this inner conflict rather than try to resolve it.”

Ulyanov and other Ukrainians agreed that the Orange Revolution of 2004 polarized Ukrainian society. “Instead of generating a civil identity for all Ukrainians no matter language, culture or religion, it caused an ethnic separation. Nobody worked with them really,” Ulyanov said.

“The project of civil, open and multi-cultural Ukraine may be lost in a fight between both regressive Ukrainian nationalists and Russian imperialists.”

Natalya Seay, 34, is a litigation attorney with Steptoe & Johnson living in Washington, D.C. “I am ethnically mostly Russian, 1/4 Ukrainian, but I identify myself as Ukrainian because I was born and raised in Ukraine,” she said.

“There was no referendum. There was a farce under the barrel of a gun, and the results are as preposterous as the manner in which the so-called referendum was held. I live in Washington, D.C. now, but I talk a lot to my family and friends in Crimea and Kherson region,” she added. “People are afraid that Putin will not stop at Crimea, and such ‘referenda’ will be held in all Southeast regions of Ukraine.”

Seay also said that she promised her best friend that she would take care of her daughter if something were to happen to her and her husband. “This is an extremely tragic situation because the once brotherly nations are driven further and further apart,” Seay said.

Opinion: The Ukrainian crisis as an opportunity

Seay and others said that the Ukrainian diaspora in the United States, not known as a political group, is more active than ever before. “We attend demonstrations in support of Ukraine, we discuss the situation with our political representatives, we do fundraisings and help financially,” Seay said.

Many families in the United States are both Russian and Ukrainian, and previously didn’t distinguish between the two heritages. The same is true in Russia. “We are all are very worried now,” said Alisa Veremeyenko, 25, who now lives in Moscow.

Kharkiv, in eastern Ukraine near Russia, is Veremeyenko’s hometown. Her grandparents still live there today. Now living and working in Moscow, she tries to go to Ukraine every summer to her father’s dacha.

“We have never distinguished between Russians and Ukrainians, due to the history of our family. However now, my grandmother, who lives there, feels resentment towards Russia. It is terribly sad that we can suddenly quarrel with our closest neighbors because of someone’s political ambitions.”

Ukrainian-American Yelena Goltsman is a human rights activist who lives in New York. The 52-year-old said, “The results of the referendum are absolutely predictable, for several reasons. First, the majority of people in Crimea are ethnic Russians, while the minorities are Ukrainians and Crimean Tatars. So the overall result is not surprising at all. I don’t think the Tatars came to vote. So the numbers are skewed, but it doesn’t matter, since the results reflect the situation pretty accurately, I think.”

Goltsman said she doesn’t have friends in Crimea, “but I love the place. I’m Ukrainian and was born there. Anything related to Ukraine and former Soviet Union touches me. The escalation of the situation there affects everybody whether they understand it or not.”

Whether they live in D.C., New York, or Moscow, those interviewed said that the recent events in Ukraine and the annexation of Crimea by Russia has affected them deeply.

The journalist Ulyanov said: “It affects me on all levels. I have my family in Ukraine and most of my work is dedicated to that region. As a media-activist and political asylum seeker here in the U.S., I’m facing the constant threat of being sucked back into that unfolding war zone and killed because of my work against conservatism for a new, diverse and modern society. It will affect all of us, the world in general. Maps are already shifting.”

Read more: How much of a threat does U.S. natural gas pose to Russia?