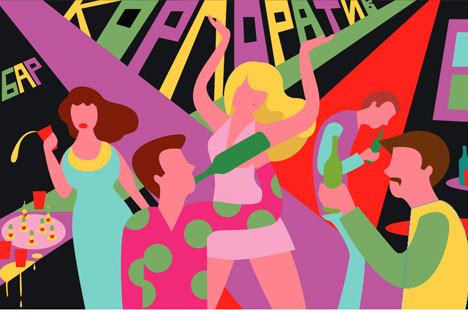 After the socialist revolution many Soviet people actively attended party meetings and listened with interest to propagandistic speeches on national policy and the fate of the world proletarian revolution.

However, by the 1950s and 1960s their interest in hearing about the “factory’s grand aims for early fulfillment of the five-year plan” had waned. Initially, the “five-year plans” “cooled off,” and though the key performance indicators of a planned economy - mandatory “volunteer Saturdays,” working for free on days off for the glory of society, and party meetings - never disappeared, people’s attitudes toward them changed dramatically.

Few took the old slogans seriously and people increasingly whispered and giggled over them. However, the ideological work of the propaganda machine did not stop or adjust to the new conditions. It just continued to impose upon people concepts that had lost all relevance and meaning to them – even once the Soviet Union had collapsed.

After the fall of the USSR, there was no teambuilding of any sort in Russia for a long time. However, everyone understood and recognized the necessity of rallying the collective. And so “corporate parties” eventually appeared on the scene, mass-culture events in the modern sense of the word.

A table would be prepared, and alcohol and snacks were purchased by the company; large companies even rented out restaurants and paid for everything. Amicably drinking, dancing, singing songs, and eating at the company’s expense while simultaneously discussing vital problems in work and politics is the image of the Russian “corporate party.”

It was, at least, when the phenomenon first appeared. Corporate parties have since undergone marked change. There are now specialized agencies of professional coordinators and developed programs. There are also sports events, contests, and prizes for the best workers at modern corporate parties. However, a few features of the older model have been preserved.

“You well know that, as they say, if you’re not embarrassed the morning after a corporate party, then it didn’t go well,” jokes a coordinator from one of the large agencies.

Read more: The basics of the best Russian drinking toasts

However, he points out that employees’ expectations of a corporate party go beyond feeling uncomfortable the next morning. Making any alterations to the standard format can be interpreted as a signal of a change in company policy or even a sign that the enterprise is going through hard times – the corporate party is seen as a reflection of the company’s health.

“When we organize a corporate party, whether it is in a restaurant or outside the city, we must always think of the table along with the cultural entertainment program,” says the coordinator.

“Once, I recall organizing a corporate party for a small retailing company. The manager was a young man zealous for the healthy way of life so he excluded alcohol completely from the menu. However, his subordinates were of various ages. When we brought them to the place and they saw that there was no alcohol on the table, just salads, they immediately began to worry. Some of them were certain that management had decided to cut costs, and the others became anxious, thinking the company was probably having a crisis. They even came up to me to ask about this.”