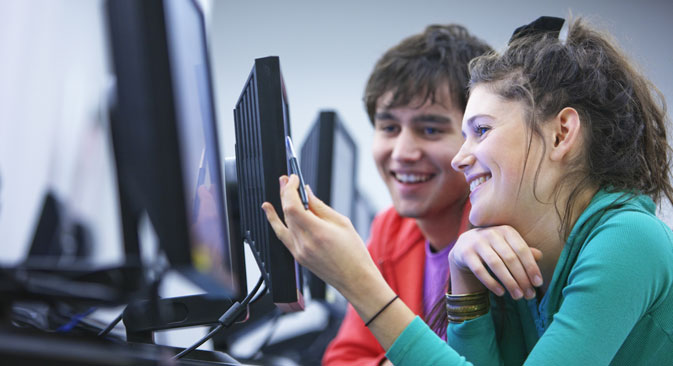 There are quite a few Russian language courses available online. Source: Shutterstock

Which language resources are the most popular among foreigners reading or writing in Russian? We have polled our readers and reviewed the language aids most widely in use.

Usually, dictionaries first come out as a heavy tome and only then the best of them are converted into electronic format. The story of the Lingvo family of dictionaries was exactly the opposite. They first appeared electronically back in 1989, with the paper version published only in 2007.

These dictionaries now have a readership of over 30 million people. Overall, the company has issued 15 dictionaries in various Russian-foreign language pairs, including English, German, French, Spanish, Italian, Portuguese, and Chinese. Online versions of these dictionaries are available in the dictionaries section of the Russian search engine Yandex.

For those who are studying Russian or can read Russian, this service offers only one language pair: English-Russian and Russian-English. The other dictionaries available here are built around English: English-German, English-French and so on.

At the same time, this dictionary has a very useful function for those who are interested in understanding usage as it provides textual examples for each entry. Professional translators know how important a word's context is: Here various options are already in place to choose from.

This is one more popular family of electronic dictionaries, covering 13 languages, including English, German, Spanish, French, Italian. Multitran is used by over 90,000 people on a daily basis. However, the number of entries and their comprehensiveness are still inferior to those offered by Lingvo.

There are several quite decent services capable of translating whole chunks of text. The two most widely used are: translate.google.com and translate.yandex.ru. Online translation sites have not yet been trained to provide an accurate and nuanced translation, which is why machine translation is often full of mistakes.

However, if you need to understand the general subject matter or the gist of a text, they can be quite useful. But a lot of additional human input is still required to do a quality translation with the help of an online translation service.

There are quite a few Russian language courses available online. The most accessible one for beginners is a project launched by the TV channel RT, called Learn Russian, which starts with the basics: the alphabet, phonetics, testing, and other basic functions.

Another resource, Master Russian, has been around for a while longer than the previous one, so it offers a lot more training materials. You could also try Russian Language Lessons.

The thing is that learning a foreign language depends very much on individual learning styles, and different people may find that different training courses work better for them.

Many of those who are learning Russian or just use it from time to time have not yet installed a Russian keyboard on their computers. For them there exists a specialist service, translit.ru.

It has two important functions. First, it allows you to type Russian text with the use of a phonetic keyboard. Second, you can type your Russian text in Latin script and then automatically convert it into Cyrillic.