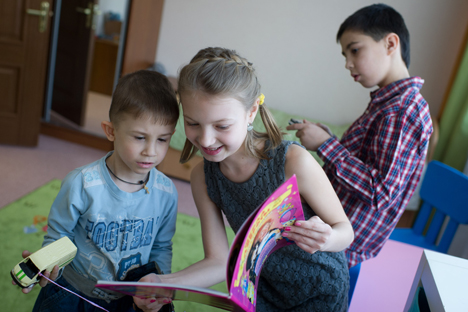 A new kind of children’s home is springing up around the Russian capital, replacing orphanages. In these centres, children have the chance to get used to a family environment by living in comfortable modern surroundings with a “mother” who spends five days a week with them.

A cozy living room combined with a modern kitchen, toys and desks in the rooms, several toilets and bathrooms - this is what many families dream of. However, this is not an ordinary family home but one of Moscow’s new family upbringing support centres. Centres like these are being set up in the city to replace children's homes. Five opened last year and 12 more will be launched by the end of 2014. Children live in a setting very similar to home, with a mother, just as they would in ordinary families. Except that this is not their biological mother but what is called a “social mother,” who spends five days a week with the kids and becomes as close to them as a natural mother would.

In the family where Natalya Tsyganova serves as mother, there are nine children. Most of them ended up here after their natural parents had been stripped of parental rights, while others were transferred from a children's home. Brothers and sisters are put in the same room, so that they can spend as much time together as possible. The kids will remain in the centre until adoptive families are found for them, in the meantime they can get used to living in a family environment.

“Some of them are finding it very hard but bit by bit they are lowering their defences, letting people get closer to them, settling in, and starting to share their thoughts and feelings,” says Tsyganova.

“This year we have invested over 800 million roubles ($22.4 million) into refurbishing establishments that work with parentless children, into carrying out the necessary transformations,” said Sobyanin.

Fifteen children's homes have been refurbished, and five of them have been converted into family upbringing support centres, which not only bring up children but also assist in selecting and preparing adoptive families for them. Financial assistance for adoptive parents has also increased, with 1 billion roubles ($28 million) allocated for the purpose from the municipal budget. The city is doing everything it can to phase out orphanages.

Last year, 418 more children were adopted than in 2012. The number of children living in orphanages dropped by 538. According to the Moscow mayor, this positive trend remains, despite the fact that children that are left in orphanages are considered to be ‘difficult’ for adoption: They are mostly teenagers or children with disabilities.

The city authorities hope that child adoptions will be further boosted by a pilot project launched at the start of the year to provide adoptive families with better housing. Under this project, families that adopt disabled children or teenagers will be provided with new housing. So far, 20 flats have been allocated for the purpose, however, according to the head of the city's social protection department, Vladimir Petrosyan, by the end of the year their number could be increased to 100.

Unfortunately, adopted children are sometimes sent back to children's homes. Last year there were 148 cases like these. Not all adoptive families turn out to be capable of becoming parents to other people's children. There are currently 51 schools in Moscow that provide training for adoptive parents.

According to Vladimir Petrosyan, the main goal of his department is to find homes for all children who have been left without their parents. A lot is being done to reduce the number of parents who lose the custody of their children. And yet there are nearly 1,500 mothers and fathers who have been stripped of their parental rights.

A bad influence on ‘ordinary children’?

Family Upbringing Support Centre No. 1 also looks after children who have been separated from their parents because the latter were stripped of their parental rights. Everything has been done here to make their life as comfortable as possible. They go to ordinary schools, engage in sports and other extracurricular activities. They can cook, look after themselves, and can make friends in the outside world. Kids who live in children's homes can do none of these things. I ask the head of the centre, Valentina Spivakova, how children in conventional schools and kindergartens and their parents react when they are joined by children from the centre.

“The reaction is largely positive. Many parents offer to help, bring presents. But there are also some complaints. They are not numerous but sometimes parents claim that our kids have a bad influence on their children, for instance teach them rude words. Granted, our children are not an easy lot, they require a lot of work. I always defend them as if they were my children and I encourage all my staff to do the same. I explain to those parents who complain that should my child come under somebody's bad influence, I would think that it was my fault as a parent,” she says.

“The main thing is for our kids to be treated as everybody else at school, sports and other clubs they go to. This is the surest way to overcome all troubles,” she adds.

Valentina Spivakova has spent several years working in children's homes. She says she would be happy to see them abolished because children there do not have an opportunity to meet other people and make friends outside the institution.

There are, however, those who have a far less optimistic view of this issue. For example, the head of the fund Volunteers for Helping Orphans, an expert with the Russian Public Chamber, Yelena Alshanskaya, believes that it is yet too early to speak of any tangible results.

“I am all for reducing the number of children's homes. What is being done in Moscow is just in its initial stage; at the family upbringing support centres, flats for family units have only just been set up. I would like to see this experience and practice continue,” says Alshanskaya.

“Our state, unfortunately, does not always have enough patience to see things through. We all remember family children's homes that were set up in the 1980s or the foster family initiative in the 1990s, but none of those projects have been completed. Family upbringing support centres should primarily seek to return children to their real families and, if that is not possible, find adoptive and foster families for them.”

Alshanskaya added that she is sceptical of the idea of a “social mother”:  “Children get attached to them, indeed begin to view them as their real mothers, but then they are separated from them. There should honesty everywhere: these are staff who look after children and they should be identified as such until a child is adopted into a family and gets a mother there.”