Fly away with me 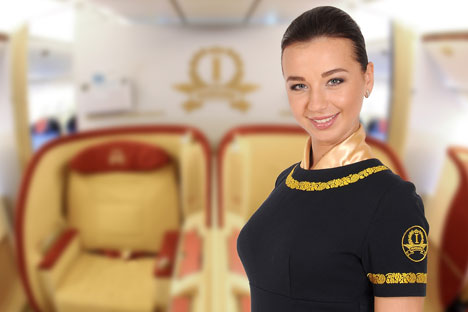 Transaero remains the only Russian airline to offer this luxury class of service. Source: Press Photo

What does it take to become a first-class flight attendant?

In addition to the standard economy and business class, Russia’s Transaero Airlines offers an exclusive level of service called Imperial. For passengers, this means luxury, delicacy and customized personal service from airline staff. For the flight attendants, getting a job in Imperial class is an important step up the career ladder.

In order to get a job in the Imperial class offered by Transaero on its Boeing 747-400, Boeing 777, Boeing 767-300, and Boeing 737-800 aircraft, a flight attendant has to complete three training courses and to have worked with the airline for at least 18 months. In addition, he or she must have excellent communication skills, be resourceful and even be able to write a poem on demand, should the need arise.

Anna Storozhuk is an Imperial class flight attendant. Before moving into her current position, she spent three years working in economy class and six months, in business class.

"I grew up in Khabarovsk, my father was in the army, and we often traveled to other parts of the country to visit our relatives and would always go by plane. I was always excited to see smiling young women in uniforms and from an early childhood wanted to be a flight attendant," Storozhuk said.

After graduating from high school, she attended an aviation polytechnic institute before joining Transaero. The company offers all employees the opportunity to train to become a flight attendant, so Storozhuk took the opportunity to make her childhood dream come true.

She says that working in economy class is much harder than Imperial. "In the economy class, everything is calculated to the last detail and drilled until every action becomes automatic. Whereas I find it easier to work with an individual person, rather than with many people at the same time. Here a lot depends on the client's mood, on how well we manage to establish contact with them," Storozhuk said.

Imperial class flight attendants provide constant assistance and look after their passengers not only in the air, but also throughout the pre-flight routine. Transaero says the Imperial class aims to combine the traditions of hospitality of the Russian imperial family (hence the name) with the use of the latest aviation industry technologies.

In the Imperial class, flight attendants are called personal VIP managers. They have a different uniform, which serves as yet another distinction of the special status of this premium class of service.

Storozhuk said that the mantra of Imperial class is an "individual approach to the client." This phrase can stand in for most incredible stories. Once she had to spend eight hours writing poetry. "We were flying to Thailand, and one passenger said that in a couple of days' time he and his wife would be celebrating their 50th wedding anniversary. He asked us to help him write something for his wife. There were three of us and we spent the whole flight trying to write a poem," she said.

Yevgeny Pelikhov, an instructor with the Transaero training center, said that, as a rule, it is clear from the start which of the flight attendant candidates is suited for working in the premium class, but the opportunity is made available to everyone.

"First, there is selection; then they learn, take a test and spend some time as trainees in the Imperial class, then they take another test. Applications for the initial selection are accepted from staff who have good references from their line managers," Pelikhov said, explaining the process.

Imperial class flight attendants must be well acquainted with the menu, which is provided by the famous Moscow restaurant Café Pushkin, and they must know how to lay a table and serve dishes, know what goes well with what. They also must know how to make a bed, since seats in the Imperial class are transformed into comfortable beds.

At the initial selection exercise, Pelikhov often impersonates a grumpy and fickle passenger. An applicant, Yelena, enters the room, which is made to look like the premium class cabin of an aircraft, and picks a test assignment.

Hers is to offer a passenger a dessert and a coffee. "The passenger" listens to what she has to say and then refuses every single dessert option on offer, saying that he needs something that is not sweet because he has diabetes. Finally, Yelena offers him some fruit that is suitable for diabetics.

Next in the test assignment, the passenger demands to be allowed to smoke on the plane. Yelena is getting a bit nervous, but she does not tell him "no"; instead she tries to offer him a magazine or a movie to distract him.

For a flight attendant, it is very important to be able to maintain control and under no circumstances refuse a passenger. In the end, Yelena manages to dissuade the passenger from smoking and to get him interested in watching a movie. 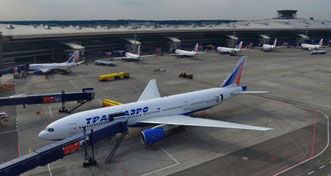 Yelena leaves the test room, with a smile on her face. "I have been working in business class for two years, but I would like to develop further and to move forward. In premium classes, requirements are always higher, but at the same time it is easier to agree with clients, although most of them are rather demanding people," she says.

Yelena was born in Novosibirsk and has a university degree in radio journalism. However, after graduation she began to work as a flight attendant. Yelena says the hardest flights are those to the Maldives: once they have boarded the plane, passengers already expect a fairy-tale holiday and some of their requests are sometimes equally fantastical.

Transaero employs some 120 premium-class flight attendants. The total number of its flight attendant staff is around 3,000. Transaero remains the only Russian airline to offer this luxury class of service. In the five years since the Imperial class was launched, it has been used by more than 52,000 passengers.