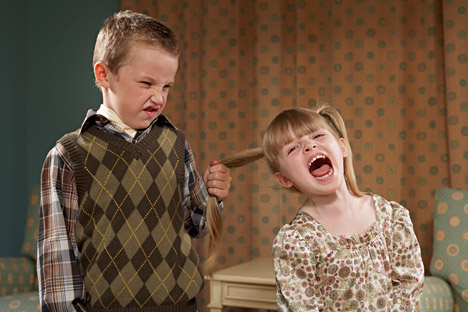 10 percent of children are the initiators of aggression. Source: Getty Images / Fotobank

Child psychotherapist Lev Perezhogin attempts to find out what the causes for increasing child aggression and looks for ways to avert its sometimes disastrous consequences.

According to Russian parents, children appear to be becoming more aggressive. Recent years have also been characterized by a marked increase in the number of child suicides. The child psychotherapist and M.D. Lev Perezhogin, a senior research fellow at the P.N. Lebedev Physical Institute of the Russian Academy of Sciences’s V.P. Serbsky State Center for Social and Forensic Psychiatry attempted to find out what the reasons are for child aggression and to find ways of averting its sometimes disastrous consequences.

Where wicked children come from

Aggression can be either an action or a non-action. The most important thing is that aggression must be directed at an object that does not want to be treated in such a manner. There are three types of aggression, as the psychotherapist immediately begins to explain.

“The first is physical (inherent to children, who are not encumbered by social conventions due to their age, and animals). The second type is verbal, when we express aggression by means of words. And the third is indirect – the transfer of aggression to a third party or object. There is another scenario – auto-aggression. This aggression is directed at one’s self – suicides, self-mutilation, self-destructive behavior (alcohol, narcotics),” he says.

According to the expert, aggression arises from competition among children and in the fight for attention from adults. “The breakdown in the world of children is the same as for adults: 10 percent are the initiators of aggression, 70 percent will respond and 20 percent avoid aggression by any means possible. The optimal channel is when parents can direct their children into falling into the 70 percent. ‘Answer them if they insult you, but never offend anyone first.’ This is normal from the biological point of view of aggression,” explains Perezhogin.

However, there is also pathological aggression, and it is caused by serious psychiatric disorders – yet no more than 200 doctors are working with these problems in Russia. And since there are so few specialists, pediatricians and neurologists simply do not notice the worst pathologies, those on the level of schizophrenia and autism.

“The number of children with disorders of the autistic spectrum and early schizophrenia is currently rising to catastrophic proportions,” says Perezhogin. “Such children are not aggressive because they need something but because they need to be left in peace. They take any attempt by another child to make friends or establish contact with them as aggression. And they answer to that, as a rule, inappropriately, absurdly, and violently.”

Parents can influence such behavior by their child, but only to a certain age and while the pathologic stereotype has not yet been defined.

“Let’s take a child bully. His peers fear and respect him. Teachers, of course, are not thrilled by such behavior, and he always ‘flies’ from parents,” says Perezhogin. “But for the child, the pluses outweigh the minuses and everything lines up nicely. It is possible to change this stereotype in a child up until puberty, but after that it is too late. Child aggression is corrected through the help of medicines and psychotherapeutic work.”

“The problems are that we have catastrophically too few specialists and the treatment itself is objectively very expensive,” explains the expert.

Perezhogin notes that there is now a clear trend among adolescents to increasingly devalue human life. “Life is no longer of special value anymore, just a banal resource like some sort of thing or food. Today suicide over unrequited love is not common because love is not in fashion; sex is. If an object of interest rejects physical contact, it does not stir up particular emotions in a teenager, as finding a replacement is very easy. A substitution of concepts is currently taking place. Consumer society extends not only to things; people today have begun to consume each other,” he says.

What parents can do

Parents do not know their children very well and do not talk to them very much, so they can rarely have an idea what their child may be going through. Moreover, there are some adults who encourage aggression or justify their behavior by saying they are supposedly protecting their children.

“If a child complains to his parents that other children are bullying him at school or outside the home, there are two aspects of primary importance concerning parents’ proper behavior: First, provide the child with moral support and analyze the situation together with him, and [then] help him find a way to resolve the conflict,” explains Perezhogin.

The expert recommends helping the child formulate a value system. “As an example, to explain what he needs and is worth fighting for, what is not so important or whose importance depends on the situation, and what he does not need at all and it is easier to give up. The more complex the entire system of human responses the better, and a child needs also to be taught these reactions,” says the psychotherapist.

“This system of diverse behaviors is never created on paper. It only gets worked out in practical life situations. By the way, children usually gain these skills in the process of cooperating with peers and adults, and parents must approve of appropriate aggression and disapprove of inappropriate aggression; that is all. But when there is no interaction between parents and a child, nothing will be achieved.”