Has Pavel Durov been fired as CEO of Russia’s largest social network VKontakte? 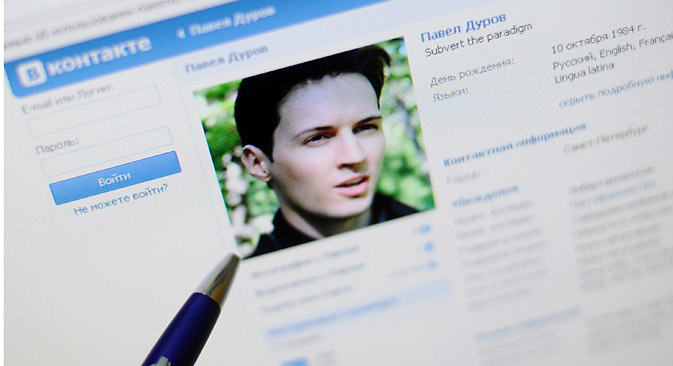 According to Durov, FSB sought to disclose the personal information of the organizers of the Euromaidan groups back in December 2013. Source: ITAR-TASS

Pavel Durov, the founder of the “Russian Facebook,” has allegedly been fired for incorrectly revoking the resignation he tendered on April 1. Durov found out about his ouster from the newspapers. In his opinion, the company is now controlled by structures with ties to the Kremlin.

However, it remains unclear if Durov has been fired or not. A conflict had been brewing among Vkontakte shareholders, who exchanged mutual invective about their power to dismiss Durov throughout Tuesday, April 22.

Later on Tuesday, representatives of the United Capital Partners fund (UCP), which owns 48 percent of VKontakte, said that they do not recognize Durov’s removal as valid.

“Mr. Sergeyev has clearly overstepped his authority in making such a decision, without discussing it with the board of directors. (…) It’s well known that we don’t harbor any sympathy towards Pavel Durov, but we consider it absolutely necessary to comply with legal procedures when taking corporate actions of such importance. The issue regarding VKontakte’s general director will be considered at the next board of directors meeting,” UCP Partner Yuri Kachuro commented.

Later, UCP labeled Sergeyev’s statements inappropriate and unacceptable. "Mr. Sergeev has no authority to make decisions or statements on matters of the dismissal or appointment of the Vkontakte CEO. The social medium’s Board of Directors will consider a change of Vkontakte management at the next meeting," spokesman for the NHS Foundation Nafisa Nasyrova commented to Lenta.ru.

Durov had learned about his possible removal “from the press.” On his VKontakte page, he wrote that the social network he created was being brought “under the total control of [president of state-run oil company Rosneft] Igor Sechin and [billionaire and primary shareholder in Internet holding Mail.ru Group] Alisher Usmanov.”

Pavel Durov is currently in the U.S. and has "no plans to return to Russia," according to a statement he made himself to the TechCrunch news website.

Durov publicly announced his voluntary resignation on April 1. Two days later, he said that it had been an April Fool’s joke. However, the company took the announcement seriously. According to VKontakte’s shareholders, Durov revoked his resignation in a legally incorrect way, and he now has to be fired.

According to Sergeyev, managers have one month to revoke resignations, while all other employees have two weeks. Durov did not revoke his resignation, and his authority therefore expired on April 21, Sergeyev said.

VKontakte sets new record with 60 million visitors in one day

Sergeyev hopes that Durov and VKontakte’s shareholders will reach an agreement for Durov to continue his participation in the company. “Pavel is the creator of the network, a visionary, and a phenomenally gifted person. His participation was extremely useful,” Vedomosti cited Sergeyev as saying. VKontakte has created a special job position just for Durov – chief architect of the network, Sergeyev said.

Rumors began circling about Durov’s imminent resignation the moment UCP entered the fold as a co-owner. UCP’s shareholders, among others, accused Durov of using VKontakte’s resources to work on another project – the instant messenger Telegram, which in UCP’s opinion represents a competitor to the social network.

Last week, Durov announced that, under pressure from the security services, he had to sell 12 percent of VKontakte’s shares to the CEO of telecommunications company MegaFon, Ivan Tavrin.

According to Durov, the Russian Federal Security Service (FSB) sought to disclose the personal information of the organizers of the Euromaidan groups back in December 2013. Scans of letters with official FSB requests were attached to Durov’s statement.

For refusing to satisfy the FSB’s request, Durov “had to sacrifice a lot, including [his] share in VKontakte,” he wrote, adding that “it’s all worth it to protect personal information.” In March, Tavrin sold his stake in VKontakte to the Mail.ru Group, which as a result now holds almost 52 percent of the social network’s shares.

“In the Russian context, something like this was probably unavoidable, but I’m glad we held out for seven and a half years. We achieved a lot. And part of what has been done is irreversible,” Durov wrote on his VKontakte page yesterday, commenting on his departure.