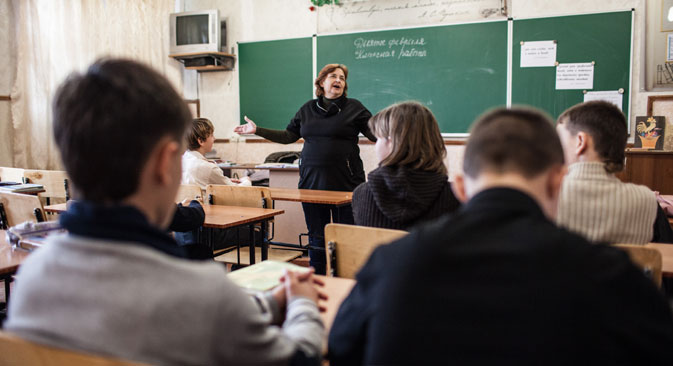 As Ukraine is tearing itself apart, it is also facing an artificially fuelled competition between Russian and Ukrainian, two languages that are nevertheless linguistically very similar.

Benjamin Franklin once wrote: “Tongue double brings trouble”. That saying might have resonated with the members of Ukraine’s parliament whose first decision following the departure of President Viktor Yanukovych in February was to repeal a 2012 law giving different regions the right to adopt Russian as a second official state language.

The decision was cancelled by Ukraine’s acting president, Oleksandr Turvhynov, who ordered MPs instead to set up a working group to consider a new language law that would take into account the interests of people in both the mainly Ukrainian-speaking west of the country and in the south and east of Ukraine, where Russian is widely spoken.

But the parliament’s move had opened Pandora’s box. It was perceived as an offence by the millions of Ukrainians for whom Russian was either their mother tongue or preferred language and fuelled pro-Russian sentiment in Crimea and in the east of the country.

The “trouble” was not that they did not understand one another, as almost all Ukrainians understand both languages and most people are bilingual. There is a high level of mutual comprehension between the two languages in spoken and written form. The Russian language is predominant in the major cities below a line from Odessa to Kharkiv and in Crimea, while Ukrainian is the predominant language in the north and west of Ukraine, as well as in the countryside.

According to a 2010 poll by the Research & Branding Group, Ukrainian is the mother tongue of 65 per cent, compared to 33 percent for Russian. There has been widespread public criticism of politicians for not speaking the national language properly. Mr Yanukovych and his former prime minister Nikolai Azarov were more proficient in the language of Pushkin than that of the Ukrainian poet Taras Shevchenko.

But this is also true for nationalist Ukrainian leaders such as the former prime minister Yulia Tymoshenko or the former boxing champion Vitali Klitchko, who hail respectively from Dnipropetrovsk and Kiev. At the height of February’s uprising, Klitchko several times addressed thousands of nationalist supporters in Kiev’s Maidan Square in Russian.

To the nationalists’ dismay, world-renowned Ukrainian authors such as Andrei Kurkov write in Russian. The nationalists are calling for the Ukrainian language to be granted a dominant status, fearing their language is under threat from Russian hegemony.

“We are not calling for Russian to be banned or trying to infringe people’s individual rights”, says Artiom Lutsak, a leader of the nationalist movement Right Sector. “All the people in Ukraine have the right to speak their language, provided they also speak Ukrainian, the language of the [sovereign] people”.

The Ukrainian expert Alexander Kava, from Ternopil in west Ukraine, believes the government’s intolerance led to the language divide. “The state policy [on language] is dominated by the Ukrainians in the west, who think that their opinion is the only valid one. This approach has not allowed cohesion within the country, because the inhabitants of Crimea and other regions in the south-east felt they were being treated like second-class citizens for speaking the ‘wrong’ language,” he said.

The language dispute was politicised after forces in favour of closer relations with the EU came to power in 2005 after the Orange Revolution. The policy yielded results: whereas 10 years ago Russian was the dominant language in Kiev, Ukrainian is today. Conversations in both languages are common, for example where one speaker would say something in Russian and the other would reply in Ukrainian.

Another Ukrainian phenomenon is sourjyk. Originally from north-east Ukraine, this is a mixture of the two languages and spoken by more than 20 percent of the population. Television channels broadcast in Ukrainian only but a studio guest can choose to speak in Russian.

By law, all public signs must be in Ukrainian. But in the stairwell of apartment buildings it is common to read notices in Russian (for example, that “the lift is out of order”). Sixty per cent of songs on the radio are in Russian. Russian films in cinemas or on television are subtitled or dubbed into Ukrainian.