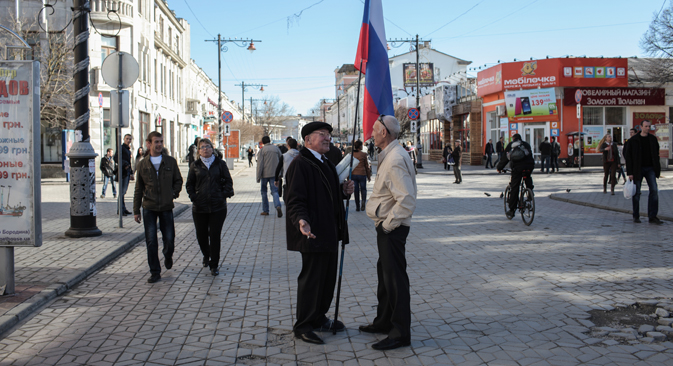 A little over a month has passed since Crimea became a part of the Russian Federation. What do local people think about their lives at present and in the future?

Izzed, a 41-year-old stocky Crimean Tatar who lives in the town of Bakhchysarai, opposed the decision to make Crimea a part of Russia. He believes that Russia’s actions should be considered a forcible takeover.

Izzed moved from Uzbekistan to Crimea, his mother's homeland, in 1999. He has been working as a taxi driver for the past eight years, shuttling people around Bakhchysarai’s old town and new town. Izzed says that he hasn’t noticed any improvements since Crimea joined Russia. On the contrary, he has seen a threefold increase in prices, which is especially noticeable when it comes to food and fuel costs.

His small taxi bus plays oriental music as he repeats the same route every half hour: New Town – bus stop - Old Town, and back. "I’m not leaving here and I will die here. If I have to fight, I will fight. I don’t believe in (Putin’s) rehabilitation of Crimean Tatars, and I’m not afraid of anyone but Allah."

Ilona, 19, is from Poltava (central Ukraine). She moved to Crimea to study psychology. Ilona was against Crimea joining Russia, but her point of view isn’t shared by everyone. “People have said a lot of different things to me. Somehow, they think that being from central Ukraine makes me a ‘banderovka,’ a radical."

After Crimea became a Russian territory, Ilona ran into problems in terms of staying in Sevastopol.

If she wants to become a Russian citizen, she won’t have to get an immigration card, but she might have trouble visiting her family in Ukraine or moving back home.

Ilona has a lot of questions that nobody has been able to answer. "If they give me citizenship, I’ll become a Russian,” the student says. “I still have a year and a half left at my university, and I’ll probably leave afterwards. I don’t know where, but I’m not staying here. There is nothing to do here. It’s a small town, and there are no jobs.”

Alexander, 28, is the captain of a small boat and has been conducting boat tours around Sevastopol for the past ten years. He has lived in Sevastopol his whole life and his parents live here too. He and his family were in favour of Crimea joining Russia.

A month after his wish came true, he realises that life is not changing for the better as quickly as he would like. "Our city is a military and tourist centre. Millions of people come to visit us, but you can see for yourself what condition the city is in. Even this pier is scary to walk on. I have not seen any support from Kiev for as long as I’ve lived here. Russia is our only hope. I haven’t felt like a Ukrainian for the past 20 years, and I’m happy about Sevastopol’s new government. I’m alarmed about the events in Ukraine and we’re worried about the people who live there."

Military servicemen Alexey and Vadim are Ukrainian citizens. They have worked for the Ukrainian Navy in Sevastopol their entire lives and have found themselves at a crossroads. Ukraine doesn’t want them and they aren’t welcome here either.

Alexey, who looks to be about 27, has served in Sevastopol for several years. His wife is Russian and his children live here. He avoids answering questions about Russia’s annexation of Crimea, explaining that he is afraid. "Here, being Ukrainian means that you are considered a fascist, a ‘banderovets’. Just try to walk around with a Ukrainian flag and you won’t even make it to the city centre. But I can’t go back to Ukraine either. If I visit my parents, the Ukrainian police will have me in handcuffs in no time. To them, I am a traitor."

His colleague Vadim is a bit more concrete in his responses. He considers himself Ukrainian, although his father is Russian. All the relatives on his mother's side live in Ukraine, and his father's relatives live in Russia. He hasn’t experienced any harassment for being Ukrainian from local Russians and he has decided he doesn’t want to go back to Ukraine; they don’t need any patriots. "I don’t want to work for the Right Sector,” Vadim confesses. “Besides, I have a wife and a six-month-old child,” he says. “Where would I take them?"

Alexey and Vadim are still officially enlisted in the Ukrainian army. There are a total of 400 servicemen like them, and they have already been issued Russian uniforms and divided up into groups of 15. They are waiting for retraining courses and will serve another country.

"I’m a purebred Crimean, and my roots go all the way back to Potemkin," Vladimir Nikolaevich, who lives in Simferopol, proclaims proudly. He is 58 and has been retired formally for the past three years. He still goes to work, though, as a ship engineer at a Norwegian company.

"I was on a ship during the referendum and could not vote. But if I could, I would have voted for Crimea to join Russia. I have relatives in Ukraine – a cousin. He thinks that we, Crimeans, are traitors. But we still talk, regardless of our differences. I haven’t made up my mind about the new government in Crimea. Overall, they’re doing good things. They’re starting to deal with corruption. To be honest, I don’t think I’m going to miss Ukraine.”

Oleg, 26, was born in St. Petersburg. In 1992, a year after the collapse of the Soviet Union, he moved with his parents to Sevastopol. He was five years old when he moved and considers himself Ukrainian. He has refused to become a Russian citizen. "I am against the joining. I believe that Crimea is part of Ukraine,” he says.

“I’ve had long discussions about this with my parents, who support Russia. It’s a problem of identity. Many people here identify as Russian and want to be part of Russia, and I can understand that. I respect their wishes, but I think that the referendum was illegitimate. No legitimate referendum can be put together in just two weeks. I think I’ll tie up any loose ends here and move to Ukraine in the summer. I work remotely for a Russian photography school, so I can work from wherever I want as long as I have a laptop and an Internet connection. I really hope that Ukraine doesn’t fall apart.”

Yuri, 31, has lived in Simferopol since he was 16. His father is from Crimea and his mother is from western Ukraine. Yuri makes metal roofing. He has to stand in long lines at banks several times a week in order to send money to business partners in mainland Ukraine because Ukrainian financial institutions no longer operate in Crimea, and Russian financial institutions have yet to be fully established.

"All Crimean residents will experience some difficulties while the banking system gets sorted out. But it’s not so bad. It wouldn’t be any better in Ukraine, I’m sure. Everyone says that we are a subsidised region, but I believe that with the right leadership and investments we can become sponsors. Like everyone else, I thought about leaving before Crimea became a part of Russia, but now I want to stay. Once things get sorted out here, everything will be okay."

Anya Malynina and Vika Martinenko, both 17, are 10th grade students at one of the public schools in Sevastopol. They are happy about being Russian citizens. Both of their families are Russian and they consider themselves Russian. They say that the city has changed for the better since the referendum and that people have become friendlier and more patriotic.

"We had such a great referendum! People were out on the streets celebrating all night. Somebody in Simferopol even died because he was so happy that he fell into a fountain and never got up again. We all walked around with Russian flags, and Russian flags were hanging outside of people’s houses. Everyone is happy, everyone was really happy," says Vika.

Vika wants to become a lawyer and Anya wants to be an economist. Neither girl is interested in politics, but thinks that they can’t remain indifferent under the current circumstances. They want people to stop believing bad rumours about life in Crimea.

"If you read about Crimea on social networks, it looks like there is a war or an occupation and we’re all starving here. But it is not so,” Anya says.