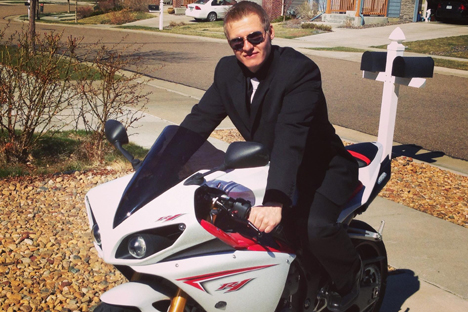 RBTH reached out to Sergei Kotov to find out the details about the accident, recorded by the biker on a GoPro camera, which has become a viral sensation on the internet.

On April, 28, 2013, Sergei Kotov was riding his Yamaha R1 down Interstate 25 in Colorado at some 140 mph when he hit the rear end of a Mazda CX-5. The accident was recorded on a GoPro camera mounted on Kotov's helmet.

Kotov decided to upload the video on YouTube exactly one year after the crash happened “to show the miracle that God has done in my life and saved me,” according to Kotov himself.

Kotov, 23, a U.S. citizen, was born in Russia, in the small village of Suzanovo in the Orenburg Region. He moved to the U.S. with his family when he was 10 and now works as a diesel technician in Colorado.

On this photo Kotov is pictured on his bike just two weeks before the accident. Source: Instagramm

The accident on Interstate 25 left Kotov critically ill and fighting for his life.

“The main injury was brain swelling, which led to an open head surgery to let the swelling calm back down. I was in a coma for about three weeks,” said Kotov about the aftermath of the bike accident.

“With the brain damage I had no movement in my left side of the body. Had to go through rehabilitation for about three months to get my movement and control back.”

It took about a half a year for the biker to return to health. The brain surgeon that operated on Kotov’s head on the day of accident told him that he had no idea how he had made a full recovery and how he was even alive.

“After my recovery I met with him and he told me that I only had a 3 percent chance to live”, recalls Kotov. “The only reason I am alive and so well is because of God,” he says.

The GoPro camera which recorded the action also survived the crash. “It is still fully intact and functional,” says Kotov, noting that he had borrowed the camera from one of his friends on the day of the accident.

Kotov admits he had always been a seeker of adventure and thrill, though he was not into any serious stuff, apart from his bike stunt. “Just always been snowboarding and playing sports and modding [modifying –Ed.] cars, but that's about it. It's just life is more fun that way and much more enjoyable,” says Kotov.

He has not ridden a bike since the accident and is really not planning to. Kotov left his Yamaha R1 in the junkyard a month ago, posting its picture on Instagram with the comment: “Today it felt like I gave up a piece of myself, a piece of who I am.”

The video of his crash currently has 230,000 views and can be considered viral, which also enables him to earn on advertising shown next to the video. But Kotov has no plans to make money from his story.

“I honestly don't really plan on trying to receive payment or sign with any of the companies,” he said.