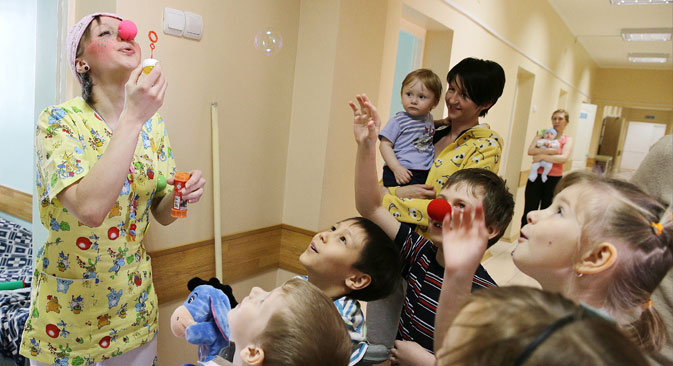 As Russia's lower house of parliament prepares a bill to regulate volunteer activity in the country, volunteer organizations continue to wrestle with a large number of problems. Despite significant growth, the movement is struggling with legal issues and a lack of members.

Russia's lower house of parliament, the Duma, is preparing a bill “On Volunteerism”. The effort will constitute one of the premier areas of legislative activity this spring, rectifying the current lack of legal regulation of the volunteer movement, which has seen considerable growth in recent years.

However, the text of the proposed bill - and even the need for a law in the first place - has generated a heap of controversies. While officialdom tries to reach consensus, volunteer workers continue their daily encounters with a wide array of problems.

A year ago, the government invited representatives of non-profit organizations to help work out the text of the “On Volunteerism” bill, drawing on the considerable experience of workers in that field.

In early April, the Moscow government issued an order defining the legal obligations of volunteer workers. The order was noteworthy as the first legal document requiring charities targeted at orphans to actually cooperate with volunteers.

However, volunteer organizations continue to struggle with a large number of problems. One of the basic challenges remains, of course, the insufficient number of volunteers.

Currently, Moscow has seven institutional homes for children with mental disorders. Although volunteers are needed everywhere, in such institutions they are simply vital, as children with developmental disabilities have a special need for volunteer friends.

After all, such children are the most vulnerable category of the orphanage system, with a typical group of 20 patients often cared for by only three nannies. With no opportunity for individualized contact with trusted adults, the children have no stimulus for inner development.

“It is important that a child has at least one close companion; this will help his development. Volunteers can fulfil this need,” says Nadezhda Syrkina, coordinator of the charitable fund I Am.

Vladimir Khromov, director of the Union of Volunteer Organizations, spoke to us about the importance of the first months, when a volunteer decides whether to continue such work or not.

“Out of 100 newcomers, after a month only 15-20 are left,” he explained. For this reason, educational courses offer basic instruction to volunteers several months after the start of their work, only then teaching the finer points of care for children with developmental disabilities.

Beyond having to attract and instruct volunteers, orphanages struggle with other problems. The directors of such institutions bear absolute responsibility for the children in their care. For this reason, volunteers are not allowed to take their charges outside the confines of the boarding house, thus depriving them of vital elements of socialization.

Specialists propose joint custody as one solution to this problem: dividing responsibility for the child between the director of the orphanage, the institution's board of trustees, and the volunteer non-profit organization.

Vadim Menshov, the director of the Center for Aiding Family Upbringing, proposes to legislatively enshrine the right of orphanage children to go on leave from their institution - to visit friends or go to movie theaters, just like children in ordinary families.

Ksenia Alferova, actress and co-founder of the I Am fund, considers that ordinary orphanages should be replaced by centers with a familial model, in groups of six or seven children.

“The groups would be mixed, of various ages and fixed membership. Children would live with brothers and sisters, as in a real home, leaving to go to school and then coming back home. Instead of a real mother there would be a social worker, but she would be attached to them, and that is very important for a child's psyche,” says Alferova.

A third of all volunteers around the world are of advanced age, but in Russia volunteerism is for some reason considered to be the province of the young. This is one of the pressing problems of the volunteer movement.

While the volunteer movement itself appeared in Russia some time ago, volunteers of retirement age were practically nonexistent. The first large base of volunteer retirees was the St. Petersburg-based teaching center Silver Age. One can now meet graduates of this organization at all of the city's serious and noteworthy events.

“I think that the generation of active retirees will come of age in 20 years or so,” observes Union of Volunteer Organizations head Vladimir Khromov.

“Many of them simply don't know where to go and how to help. If more information is disseminated by the media and social networks, then the number of volunteers will grow.”

Based on material published at Kommersant