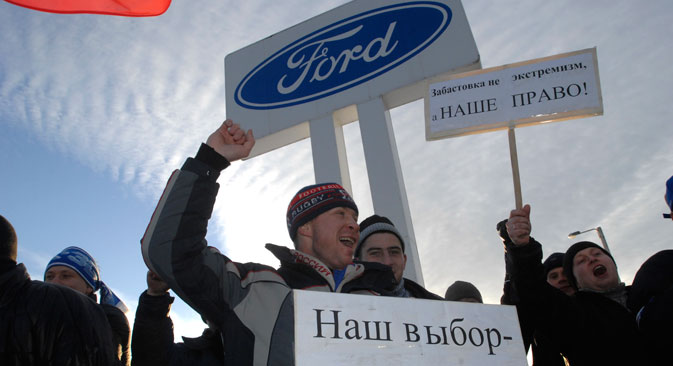 More than 600 workers turned in notices of voluntary dismissal. With an average salary of $1200, lump sum payments after taxes will be about $5,000. Source: ITAR-TASS

The Ford Sollers plant outside St. Petersburg offers a severance package that includes five months' salary for staff that quit voluntarily when production drops. When Ford recently called a halt to production at the factory, it found that the workers had learned a thing or two about taking the initiative.

The Ford Sollers plant in Vsevolozhsk offers a severance package that includes five months' salary for workers that quit voluntarily when production drops. After being managed by capitalists for years, the proletariat has learned to defend their rights and receive compensation. When this correspondent visited the plant near St. Petersburg on the eve of May Day, he found that the workers have begun to defend their rights outside the factory as well.

Success built on the Focus

Vsevolozhsk, a suburb of St. Petersburg, is not just a one-factory town - many other factories are located here besides the Ford plant. The Vsevolozhsk plant was the first assembly plant in Russia, and when it was opened in 2002 it was also the country’s smallest vehicle assembly plant (its original capacity was 25,000 cars per year).

However, demand for the new Ford Focus exceeded expectations and people waited up to six months for new ones. Once the scale of demand was clear, production was increased to 162,000 per year at the factory. They began producing the Mondeo alongside the Focus, which made the plant one of the largest of its kind in Russia.

Just a year ago, there were three shifts assembling the Focus and Mondeo, but since September 2013 this has been reduced to two. Now the conveyor belts are standing idle after Ford called a halt to production. After June 8, the plant will continue work, but only one shift will be in operation.

The reasons for the cuts are clear. The factory is dependent on the dollar exchange rate, which has been climbing. With localization of car parts for the Focus currently at less than 50 percent, according to experts, the dollar's gains against the ruble have proven fatal.

In fact, for the near future, it seems the plant is returning to the concept it started with a decade ago - to produce less, but more expensively. On April 2, the company's management announced production cuts, and the move to just one shift, which would mean laying off more than 750 of its total workforce of 2,300.

The office of the Interregional Trade Union Workers' Association (MPRA), which grew out of the famous trade union cell at Ford, is located in the center of St. Petersburg, not in Vsevolozhsk.

Ford management once sent welder Alexei Etmanov to Brazil for a seminar on Ford unions, and since then, under his leadership, the union has waged an uncompromising battle against those very same Ford managers. Three months after his trip to Brazil, Etmanov organized a week-long Italian strike. And in 2007 they stopped production at the plant several times, once for a whole month.

"When union activists are employees of the company, they are constantly under attack and threatened with dismissal," says Etmanov. "The simplest grounds for dismissal are three reprimands in a day. For example, if you go to the restroom for ten minutes they can say you 'left the workplace without a good reason' or 'failed to properly maintain the workplace’.”

“But it doesn't say anywhere in the law that local organizations must be created at the workplaces. So we began to create independent local units outside the workplace that employees could join without even notifying their employer."

It turned out, however, that Etmanov's idea of switching to external local units didn't catch on at his own Ford plant. Only 90 workers are members of MPRA, and 850 are members of Etmanov's former union, the local trade union organization (PPO) at Ford Sollers, which is headed by Artem Yashenkov.

The local union at Ford Sollers refused to listen to the MPRA and dissolve itself to join a new type of organization, and subsequently was expelled from the MPRA.

Etmanov says the local union made a mistake agreeing to the cuts. "Since April 2, a program of voluntary dismissal has been in effect at the plant. Everyone who submits a letter of resignation by mutual agreement will be given five months' pay," he says.

"If they had regular layoffs, the employer would have to hand over the same amount – two months' pay while the layoffs are negotiated and then three more months' pay after the dismissal."

Etmanov talked about the conditions he would have fought for if the trade unions hadn't separated. "We would have insisted on ten months' pay. In the U.S., employees making $5000 per month at Ford were paid $50,000 when they were laid off."

Etmanov isn't impressed with the company's offer to transfer anyone who wants to Ford Sollers plants in other regions of the country. In fact, no one has expressed an interest in this offer.