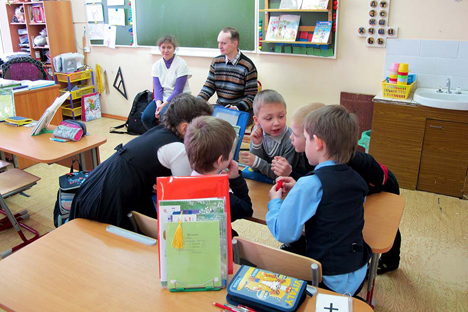 In the first lesson, specialists get to know the children and tell them about who people with disabilities are. Source: Russian Disability NGO "Perspektiva"

Since the beginning of the current school year, kindness lessons have been attended by about 1,800 pupils.

For the past 10 years, schools in Moscow have been teaching “kindness lessons”, during which children have an opportunity to communicate with people with disabilities. These sessions are conducted by the Perspektiva Regional Public Society of Disabled People.

For each age group, the society has developed a special program consisting of three lessons. Any school can invite specialists to give these lessons, in order to help pupils form appropriate perceptions of people with disabilities. Since the beginning of the current school year, kindness lessons have been attended by about 1,800 pupils.

In the first lesson, specialists get to know the children and tell them about who people with disabilities are. The specialists leading the class I drop in on are Alexander Zaykin and Yulia Kuleshova. Zaykin is blind, and Kuleshova has problems with her speech and hands, the consequences of surgery.

Second graders (8-year-olds) listen to them attentively and enthusiastically. One girl, surprised, asked: “And what do you see with your eyes? Something black?”

“No, on the contrary, something bright, a light fog. Have you ever watched the cartoon Hedgehog in the Fog?” Zaykin answers with a smile.

Children are invited to play a game called “Imitation” – and many of them willingly volunteer for this. The students are asked to walk around the classroom with a blindfold and find a toy, following only the instructions of a classmate; to hop around on one leg; to undo and fasten buttons with one hand.

“It’s easier to die,” blurts out one boy who is struggling with a difficult task - the classes can be challenging for participants. Children begin to understand the difficulties that people with disabilities face in their daily lives.

The second session begins with the game called “Get a Job”. The children are divided into three teams and are given a task: Make a list of professions that are suitable for people with disabilities.

During the subsequent discussions, these lists are supplemented and children are told where they were right, and where they made mistakes.

Alexander then demonstrates his “talking phone” to the children, explaining that blind people can read, write, as well as use a telephone and computer. The first-graders indicate great interest when they are shown Braille and a special map.

When at the beginning of the lesson they were asked whether people with disabilities could work, the students’ opinions were divided. However, suddenly they have become convinced that such people are able to find suitable jobs and live full, rich lives.

By the third lesson, the children are well prepared, and can tell by themselves what obstacles lie in wait in the outside world for people with disabilities, and how these can be overcome. Then they play a game called “We are Different”. They go up to the blackboard in pairs and try to list the differences among their fellow classmates: “Dima, you have freckles, and I do not; Kirill, you are nimble, and I am calm.”

Thus, the children come to understand a very important idea: We are all different, but we can communicate on an equal basis. Then the children are shown some videos: about a Korean musician who has achieved great success, despite the fact that he has no hands, and a distinguished Russian professor who cannot see or hear and travels around in a wheelchair.

After the lesson, the children talk about what they learned – this was “kindness, courtesy, and mutual aid”, and they also realized that “you can be friends with anyone.”

Zaykin and Kuleshova started giving kindness lessons not too long ago. Kuleshova is a psychologist by training, so this is a very suitable occupation for her. Zaykin worked 15 years as a history teacher in a school and now continues to work with children.

“This is something that is needed not just by us, but by the schools. It shows children that people with disabilities are the same as all people, and they can communicate and make friends with them,” says Zaykin.

The organization Perspektiva has been fighting against stereotypes and seeking the inclusion of people with disabilities in all aspects of society for over 15 years already. Kindness lessons have been held in Moscow during the past 10 years, and today 20 schools participate in this program.

The initiative is now being followed by organizations across Russia – in Buryatia, the Voronezh Region, the Kaliningrad Region, the Khabarovsk Territory, and the republics of Tatarstan, Chechnya and Dagestan.

Participation in the program costs nothing for the schools, and the specialists who give the lessons are paid by Perspektiva. Five years ago, the Metropolitan State College (branch No. 3), at the initiative of a social care teacher, began working with Perspektiva.

“We are trying to free children from hate and anger. Will we succeed? I do not know, but I do hope that at least we plant the first seeds,” says Zhanna Shinkarkina, the director of the college.