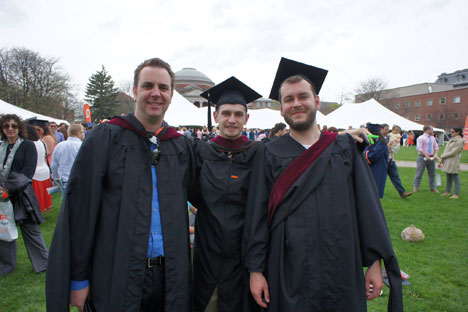 Fyodor Pogorelov (right): "Here students have great freedom: which classes to choose, how to write papers etc. With this freedom comes responsibility: Everything depends on you." Source: Personal archive

Fyodor Pogorelov, a TV and radio journalist from St. Petersburg, is studying for a year at Syracuse University, NY, as a Fulbright scholar. In an interview with RBTH he speaks about differences in education, his new friends and trips across the country.

RBTH: How long have you been in the U.S.? Where do you study and which program are you on?

I arrived in the U.S. on June 29. And we’re going to get back to Russia on July 1. We have J-1 and J-2 visas, which are valid for one year. I’m a student at the S.I. Newhouse School of Public Communications (Syracuse University) in the small city of Syracuse, upstate New York. That’s a master program in the Television, Radio and Film Department.

RBTH: What did you do in Russia before you became a Fulbright scholar?

I graduated from St. Petersburg State University in 1999, from the Sociology Department. But from 2004 to 2013 I worked as a journalist: in print media, in radio and in TV, covering sport, culture and entertainment.

RBTH: Was it easy to get into the program? What was your main motivation?

Our main motivation was to spend a year abroad. The easiest way was to get a scholarship and to go and study. Some of our friends studied in the U.S. with the help of the Fulbright Foundation. So in 2012 I applied for a Fulbright scholarship, spent three months in painful efforts to prepare for the GRE [Graduate Record Examination] test and in April 2013 I got a triumphant email: “Congratulations, Fyodor, you are going to Syracuse.”

Fyodor Pogorelov with his daughter and wife in Boston. Source: Personal archive

RBTH: In your opinion, what are the crucial differences between Russian and American education systems?

There are plenty of them. Russian higher education grew out of the German tradition, in which freedom was severely lacking. In my college years, everything in my education was determined by school: this year you take these classes, next year these ones; your senior paper should be written according to certain rules.

Here, especially in the Masters program, students have great freedom: which classes to choose, how to write papers etc. With this freedom comes responsibility: Everything depends on you.

RBTH: Did you manage to visit radio stations and TV channels in the U.S.? Did you discuss your work and share your experience with your American colleagues?

Fulbright: A win-win situation for Russians and Americans

To tell the truth, my Russian experience is totally irrelevant here. America is extremely self-sufficient, so all my funny achievements in Russian media didn’t interest anybody. As for radio and TV stations in the U.S., in January, Newhouse school organized an introductory trip: One part of my course went to LA, another to New York. Since at that moment I already knew that I would spend June in LA doing a mentorship, I chose the New York trip.

In one week at the very beginning of January 2014 we visited CBS, CNN, HBO, the Sirius Satellite radio station, and Bravo; besides that we had dozens of interviews with media professionals from different fields and met a group of Newhouse alumni. We also visited the Jimmy Fallon late night show at NBC, in Rockfeller Plaza. It goes without saying that it was an incredible journey.

RBTH: Was it easy to adapt to a new reality in Syracuse after living in St. Petersburg? Which things impressed you and your family the most in your American life?

I hope that my adaptation skills are pretty good. At least I did not have any issues with turning into a student. That was definitely a total downshifting: I moved to a small room without any furniture and spent a month sleeping on the floor in a sleeping bag.

The biggest issue was the absence of my family: According to the Fulbright rules family members can join a Fulbrightee only after two months. So this separation was pretty tough. But since my wife and my daughter arrived in September everything has become much easier.

As for impressive things (besides the educational process): From the first day I forbid myself from being surprised, in order to minimalize potential cultural shock. It was a little bit difficult to get used to living in a small university city – especially after living in the center of St. Petersburg.

To be honest, there’s nothing to do in Syracuse, besides going to school. Our favorite amusement was riding the merry-go-rounds in the Destiny Mall. We bought a car only in October, so we spent a month riding buses.

Oh brother - the public transportation system is ridiculous compared to Russian cities. The ghetto neighborhoods and their proximity to the city center were also unusual. The unpredictable climate – the so-called Great Lakes effect – was extremely annoying.

RBTH: Are you getting on well with other students? Can you say that you’ve found some new friends in the U.S.?

I’ve found new friends for sure. And that’s my best achievement, no kidding. We have a tight-knit group of four boys from Utah, Texas, New York and Puerto Rico. I know that this year in Syracuse was a beginning of a real friendship.

I hope that besides this quartet I’m doing well with the rest of my classmates. I’ve also enjoyed my conversations with professors from the school. They’re outstanding.

RBTH: Have you managed to travel a lot here? What are your most memorable impressions from the U.S and your favorite places?

Our initial plan was to travel as much as possible. So we traveled during every break I had in my classes.

In November we drove to Chicago to visit friends. In December we traveled around the West Coast: Visiting my classmate in San-Francisco, friends in Los Angeles, doing a typical moronic trip to Las Vegas.

During the spring break we visited relatives in Seattle, and in March we drove to Boston. As we counted recently, we’ve visited 12 cities on two coasts. We also wanted to go to the southern states, but we were stopped by the traditional combination of lack of money and time. I think all these trips were fantastic. I suppose Seattle was the most impressive city.

RBTH: Did you notice any changes toward you after the events in Crimea? Because Russia and the U.S. have such a different perspective on the crisis in Ukraine. Do you discuss it in classes and with your American friends?

No. I didn’t notice any changes. Luckily, the majority of people around me are smart enough to understand that regular people have nothing to do with politics. We sarcastically joked a lot about that, especially because of the fact that one of my closest friends has Ukrainian grandparents.

RBTH: What are your plans when you get back to Russia? Maybe our TV will see a new bilateral show, like the one Vladimir Pozner did with Phil Donahue in the 80s, which helped the two countries to understand each other…

It’s funny, but some of the, I would say, mature professors remember these shows. I would enjoy it, for sure. But I strongly doubt that at this historical moment it is possible at all. I have some media plans after our return to Russia, but I would prefer to discuss them later.

Read more: Russian-American development, from the ‘Inside Out’>>>