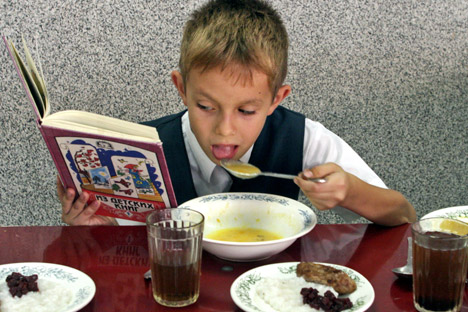 School menus offer a multitude of options: The calendar is composed of 14 days, and during this period no dishes are repeated. Source: ITAR-TASS

A bold initiative in Khabarovsk, in Russia’s Far East, has brought wholesale changes to the city’s school cafeterias, with money being invested in cheerful renovations, healthy changes to menus, and new equipment for kitchens. As a result, pupils are now returning to cafeterias in droves.

Education reform in Russia has now even hit school cafeterias. In the far eastern city of Khabarovsk, menu changes and renovations to school cafeterias have resulted in pupils are returning to cafeterias in droves, with many reporting that they are actually happy to eat at school.

All 78 schools in Khabarovsk now have cafeterias that resemble cakes made by a skillful hostess – but this only a recent development. Five years ago, the city began a revolution in school nourishment – first changes were made to the local budget, then Khabarovsk became a participant in an experiment ran by a corresponding national project.

Today, the city’s school kitchens have the latest equipment, and the cafeterias have become quite elegant, with peach tones and blue accents.

“And the children who previously wouldn’t even poke their heads into the cafeteria, because they thought the food was ‘cold and tasteless’, are starting to eat in the cafeteria just to sit in the beautiful surroundings,” said Isabella Proshina, Director of School No. 72.

“Now our school is like a restaurant,” said one sixth-grader.

Incidentally, the price of a cafeteria renovation is comparable to the cost of repair for a decent restaurant: on average, each updated dining area costs 5 million rubles (about $144,000).

At 9:15 a.m., the bell rings in Eastern Languages School ​No. 4, signaling the end of the first period, and the younger pupils make their orderly exit in pairs to the cafeteria. For breakfast, they get rice milk porridge. Some wrinkle their nose, unhappy with the porridge, and their hardly-touched plates are left on the tables.

Three men are on duty for the whole 45-minute period, and they all need to do is quickly remove the food left behind and reset the tables for the next breakfast period, when the 3rd and 4th graders come in.

The school has 28 different groups altogether, and they must be fed on a strict schedule - they cannot possibly fit into the cafeteria all at once. After the third period, the seniors arrive in the cafeteria, and unlike the younger pupils, they empty their plates completely.

Buckwheat, rice or oatmeal cereal with milk is on the menu on Mondays. On other days, macaroni and cheese, cottage cheese casserole, potatoes with sausage, or even stuffed cabbage leaves are served.

Lunch time comes immediately after the fourth period. From 12:15 p.m. – 2:00 p.m., also in three waves, kids eat lunch in the school cafeteria. At 4:00 p.m., for those pupils that are left in daycare, the school even offers an afternoon snack.

“We even have a snack bar,” said school Director, Irina Gorlova. “But it only opens after the fifth period, when lunch has almost ended, so it won’t affect pupils eating their hot meals.” The snack bar sells pizza, pies, muffins, juice, and water – but no chips and soda.

If five years ago this school centrally fed 61 percent of its pupils, now this figure has climbed to 96 percent. The reason being, of course, not only the beautiful tablecloths and cute little animals on the walls, but also that the children find the food to be really tasty.

Why is aggressive behaviour on the rise among Russia’s children?

The prices may have doubled, but they remain quite low. Breakfast is 40-50 rubles ($ 1.10-1.40), and lunch is 50-80 rubles ($ 1.40-2.30), depending on the school. Freshly baked bread rolls with cheese or sugar can be bought for ten rubles. Children from low-income families eat free of charge, as their food is financed by the municipal budget – these children make up about 15 percent of the total.

Of course, these are average figures, and in many respects the choice of centralized dining in the school depends on age: 100 percent in elementary school, 97 percent in middle school, and 47 percent in high school.

Those who choose not to contribute money to centralized dining, as a rule, still eat their breakfast and lunch in the school cafeteria, but they pay with cash, and they have the ability to self-assemble their lunch, for example, by taking a triple garnish or a couple salads.

School menus offer a multitude of options: The calendar is composed of 14 days, and during this period no dishes are repeated.

Once a week for lunch, the school offers a fish dish, either grilled fish or meat balls. On other days, it offers poultry or another kind of meat. The first course consists of variations of soups and borscht.

Every day, the school offers up to six different types of salads. Dairy products have been added to the menu, including curd cheese or yogurt, and are offered a few times a week. However, the children are not fond of fully cleaned boiled eggs, and so they have switched to omelets.

On the day observed here at School No.4, pupils ate a salad of pickled vegetables, pea soup, Beef Stroganoff with boiled beef with rice, and stewed fruit for lunch.

Providing diverse, tasty food that meets all health standards is easier than ever, after having created a single plant where the cafeteria food is prepared. Although Khabarovsk stretches a good fifty kilometers along the Amur River, the city has found an elegant solution.

“We have opened a chain of 14 school cafeterias. Fully-cooked and semi-prepared meals are loaded into cars and transported to the educational institutions,” explained Irina Vsevolodova, the Head of the Department of Education Administration of Khabarovsk.

“As a result, today, 88 percent of pupils receive a hot meal at their schools, and in fact only recently, this figure barely reached 50 percent. And for half of our schools, breakfast and lunch covers about 90 to 100 percent of the total pupil body. Children are willingly going to the cafeteria, and willingly eating.”