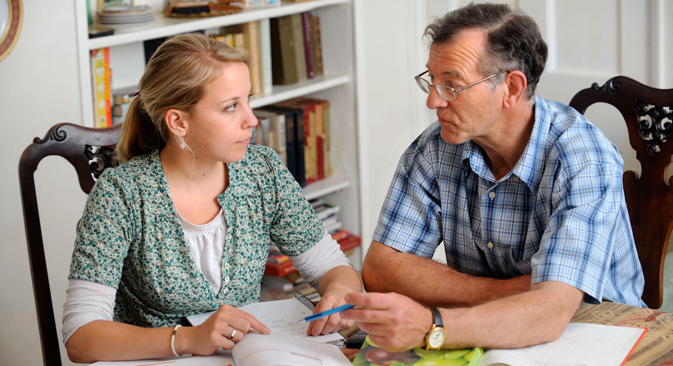 The more global the world becomes, the higher demand for foreign languages. Traditionally, language courses were offered by universities and language schools, but many people are now turning to the private sector. We met with a number of expats teaching their native tongue in Russia to find out what this market is like.

As the world becomes ever smaller thanks to faster transport and communication and the increasing globalization of commerce, being able to speak at least one foreign language is becoming an essential skill for anybody wishing to remain competitive on the job market, as well as for those with an interest in exploring new cultures.

Traditionally, language courses were offered by universities and language schools, but many people are now turning to the private sector in their desire either to learn a new language or to work on improving their level in a language they already know. We met with a number of expats teaching their native tongue in Russia to find out what the Moscow market is like.Everybody's story is different. Jorge, a Mexican, studies at the Gnessin Academy of Music and also teaches Spanish at Moscow’s Spanish Cultural Center in his free time. Zen is from China and is studying Russian at a Moscow university. She has found a Russian friend and they take turns to teach each other their native languages: free of charge and to mutual benefit.

A car and a house for language classes

Yet language training is increasingly done by professional teachers. Hugh Kieran McEnaney, a 44-year-old Irishman, has been teaching English in Moscow for six years already: "I decided to embark upon a teaching career because I did not speak any Russian and had a training and coaching business at home in Ireland for over five years." With the money he makes, McEnaney has bought a car and a house in the Oryol Region, where his wife is from, and rents a flat in Moscow. On average, he has eight students a day.

Guido from Spain has a slightly different story. He is a linguist by training and loves to travel: "Teaching your mother tongue abroad is a way of combining your interest in traveling and your career. I studied philology: There aren't many career paths open to you with that sort of degree; teaching is probably the most popular and accessible one." Most of Guido's students are undergraduates who prefer to practice Spanish with a native speaker. However, his earnings are far from ideal. "You need to have several jobs to get a good salary," says the Spaniard.

Lessons are not cheap. Of course, things vary depending on the teacher, but there are average market rates that one has to take into account – and private lessons invariably cost more than signing up for a course at a language school. According to Anna Genova, who lived in the U.S. for many years and then returned to Russia, on average, one-to-one English lessons with a native speaker cost from 1,000 rubles (about $30) an hour.

"Russia's Federation Council has approved a bill, according to which foreign citizens will have to confirm knowing the Russian language, history and fundamental laws in order to obtain an employment visa and residence permit.

A private teacher's pay depends on their business acumen and on how many long-term students they manage to find. "There are all sorts of students,” explains Genova, “underperforming schoolchildren, senior students and adults who are preparing for various tests, or just grown-ups who want to learn to chat in English."

How important it is to learn a foreign language with a native speaker? After all, it is more expensive and, some would argue, often not as effective as learning a language with a Russian professional.

Language teachers who are native speakers are often not professionally qualified, whereas an experienced Russian teacher often knows grammar better than a native speaker and can explain it much better.

On the other hand, students frequently complain that Russian teachers lack knowledge of idiomatic language and rely on outdated methods that neglect communication and fluency in favor of an exhaustive focus on grammar.

"We often offer so-called combined training,” says French teacher Valerie. “First students are taught by Russian teachers from the Pedagogical University and then they practice with me. I can help them improve their pronunciation and teach them some colloquial phrases."

This is a free market. As a rule, teachers and students find each other on forums and social networking sites, or by word of mouth. These lessons, which can be held at home, in a café, or via Skype, are organized privately.

Official language schools account for just a fraction of the real market of language services, which makes it very difficult to assess the true size of the market. The same applies to assessing the quality of teaching. Lessons are given by students and professional linguists and even by backpackers who are working to pay their way. Everybody has different experience: Some have been teaching for years, while others have just entered the market.

The success of teaching often depends on how well the teacher and the student(s) get along. If they click, they start speaking the same language pretty quickly.

Looking at this large and still expanding market, one thing becomes clear: An expat will survive in Russia even if they don't speak Russian and do not have a professional qualification. All it takes is the desire to teach, if only a little, and then they can find students and start making money. After that, it’s all in their hands.

We thank the Ru-En Games for Expats club www.ruen.engam.ru for help with this article.