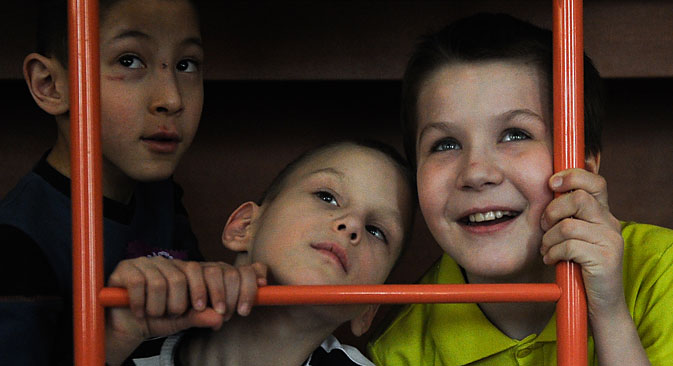 In Russia there are some 560,000 social orphans whose biological parents are living but cannot care for them. Source: ITAR-TASS

Orphanage system creates a vicious cycle that can be next to impossible for graduates to break.

Zhenya was eight years old when his grandmother died. His father did not live with them and when his mother took to the bottle again, Zhenya was left to his own devices. For about a year, he lived by himself, sometimes at home and sometimes in the street. So when he was offered a place in an orphanage, he took it. “I have no regrets. I am who I am thanks to that home,” Zhenya said.

Zhenya, whose full name is Evgeny, is now 28. From looking at him or talking to him, there is no way to know he grew up in an orphanage, sometimes translated from the Russian as children’s home, although he stresses with pride that his girlfriend is “from the real world” and did not grow up in an institution. He never finished school, but he is not particularly bothered by that. Zhenya has an apartment on the outskirts of Moscow that his grandmother left him and he makes good money working as a systems administrator for a wholesale clothing company.

There are some 560,000 social orphans like Zhenya in Russia – children whose biological parents are living but cannot care for them. According to the Education Ministry, social orphans make up 85 percent of all orphans in Russia. Their life stories are similar: Parents lose custody because they drink; mothers give up children at birth because of real or perceived disability. All these children ultimately end up in oprhanages. Today there are about 2,000 of these closed institutions in Russia, where children both live and go to school.

Last year, 15,000 orphans left children’s homes. Most aged out of the system. Starting from the age of 18, orphans receive a monthly benefit of about 25,000 rubles (700$), and the state is supposed to provide them with an apartment, but the main problem, according to experts, is that children who grow up in these institutions are totally unprepared for real life.

Alexander Gezalov, 47, an expert in social orphanhood in CIS countries and a graduate of a children’s home himself said of the experience: “For a child, leaving a home is a like landing on the moon, where nobody knows them. And this is how they spend the rest of their life, in a spacesuit, since nobody takes any interest in them.”

Gezalov, who tries to help orphanage graduates to adapt to life outside, says that in their current form, children’s homes are just a breeding ground for criminal groups. “I am in touch with a young woman from Izhevsk, who has recently left a children’s home. She says most of whom she knows have either become drug addicts or are already dead,” Gezalov said.

Zhenya considers himself lucky. “I have many friends from the outside world, while those people remain inside their usual circle. They even marry between themselves.” While still at the home, Zhenya became interested in books and computers, and his teachers encouraged him.

Efforts to socialize children’s home graduates are being made. They are given places in vocational schools, but generally this is the only higher education available to orphans. Few children who are raised in orphanages have a strong enough educational background to attend universities. One of the problems, according to Zhenya, is that staff at children’s homes are not qualified enough. Very often, they are orphanage graduates themselves, who have failed to adapt to “the real world.”

The children’s homes are generally not underfunded. In 2012, the state allocated 3 billion rubles ($86 million) for 42 children’s homes in Moscow and Moscow Region – about 1.5-3 million rubles ($43,000-$86,000) per child a year. And that figure does not include sponsors’ donations. The problem however is that orphanages get their funding depending on how many children they have. As a result, orphanage administrators are not interested in looking for foster or adoptive parents.

In 2012, Russians adopted approximately 6,500 children. State officials have been discussing reform of the orphanage system for a long time, but there has been no decision as to what kind of jobs or life orphanage graduates should be prepared for. Until those questions are answered, there can be no firm plan for reform.

According to Gezalov, it takes an orphanage graduate between 20-25 years to become fully socialized. Zhenya says he has received much help from the N.G.O. Opora, which helps orphans to adapt. When Zhenya was 20, specialists there gave him advice about choosing a job and helped him understand how people interact “in the real world.”

According to Gezalov, rehabilitation centers like Opora are a good thing but they just fill in the gaps that exist in the orphanage system. He would like to see children’s homes recruit professional teachers.

Zhenya thinks he managed to escape the fate of many orphanage graduates because he lived at home until he was eight and remembers what life on the outside was like. “Those who have spent their whole life in a home find it extremely difficult to extricate from this system. Thus, the children of women who were in a home themselves that end up in orphanages, and the vicious circle continues.”